Welcome to another edition of Goatboy reviews brought to you by the Frontline Tactics Corner.  Today will talk about the Mind Bullet Sky Master known as the Hemlock Wraithfighter.  It’s the Rags to Riches story of a weird unit that no one took and became a different weird unit you don’t see people taking…so maybe a rags to rags tale?  Let’s go on a walk about as we figure out what the heck this model is all about.

The Hemlock Wraithfighter was originally an odd design.  You had a flying Psyker with locked in rules.  Then you had a flying Psyker that didn’t have locked in rules but couldn’t really take any spells as he didn’t have a firing point to shoot out of.  It just felt like an out of place design and thankfully the new Eldar Craftworld Book fixed it by at least making it usable again.  The Change to Psychic Pilot helps as well as a nice bump to Mastery Level 2 and access to some interesting powers.  Still we don’t see this guy hit the Table top that much even though I think its rules are interesting enough to warrant some thought in specific lists. 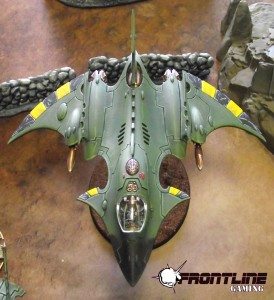 The unit is pretty simple – take out that pesky Crimson Hunter Aspect pilot, throw in a spirit seer/super warlock of sorts, change out some weapons and mix in some of the pseudo dirty D action.  The Mastery Level 2 for its pilot is pretty neat as you can easily stack some other Psychic dice while still having a pretty mean little flyer.  Its weapon load out is a little rough as any force of a Jink save will render the model’s weapons useless as they are blasts.  Still it does have Spirit Stones so you can hope for that lack of an explosion result and pay your enemy back with some D Scythe action. 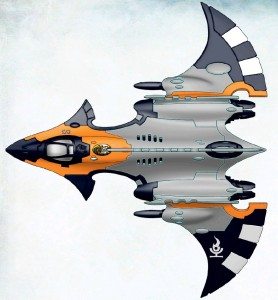 Overall it has all the rules you would expect from an Eldar flying vehicle psyker.

As most people have found the secret Eldar sauce is Warp Spiders, Eldar JetBikes, and some Farseers.  Depending on how many Wraith Knights you can have in your local meta and you got the normal Eldar list.  I think a set of 3 might be interesting in another CAD or in some kind of Psychic Choir list to spam out on Telepathy powers, specifically Invisibility, Psychic Shriek and such. Adding an additional 2 Warp Dice to the pool per vehicle, and all of those potential psychic buffs and attacks in addition to the Heavy D-Scythes makes for quite a potential punch.

They are a cheap way to throw out some high damage dealing D attacks, which we all know loves to be thrown on those pesky Necrons as it denies their Reanimation Protocols rolls. It also denies Feel no Pain, too, for dealing with Gargantuan Creatures and such.  I think the added Warp Charge battery option is great, too and if you want to try and create a “Dominate lock list” these are another good choice for that style of list.  If you haven’t heard of the Dominate lock let me break it down for you. 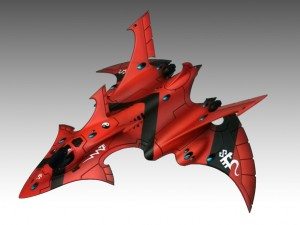 You will end up giving a unit -3 to their leadership and could prevent them from moving again.  Dominate forces a unit to roll a leadership check to Move, Assault, or shoot.  Those dang pesky Deathstars will have to roll it even if they are fearless.  In a Team Event we saw one Wolf Star get stuck the entire game with a Leadership of 4 to try and “break” through to bypass Dominate.  These flyers could be another option as they force another -2 to enemy units’ leadership, and with Vector Dancer to stay within Range of whatever Deathstar (or any susceptible unit) needs to be dominated with your thoughts.

If only Terrify caused you to take a leadership test right away – you could make units run off the table with massed tests across 3 of these guys.  While it would be powerful I am thankful we don’t have to play another edition with a unit that just forced units off the table with Leadership checks.  I remember the days of Leaf Blower and becoming sad when I had to try and roll Snake Eyes to stay on the table top. Anyway, Terrify is another great way to use these guys in addition to Psychic Shriek, which they quite easily get into range with and with their leadership debuff, can make for devastating attacks. Combine this with the aforementioned ld debuffs from other Eldar factions and you can really devastate some armies. Tau especially, are weak vs. these style attacks.

The Mindshock Pod does not apply to all Leadership checks, only those for Fear, Morale, or Pinning. It will have no effect on Dominate or similar powers.

Also, while Telepathy is good, don’t underestimate the chance to roll on Runes of Battle- Conceal is a great power for a flyer, since it means 5+ cover all the time and 2+ when you Jink (or can sneak out a cover save from terrain.)

Played a GT that disallowed SH/GC units, so took a Hemlock instead.

Every game just took Shriek and Conceal/Reveal. Even without the -2 debuff was still very effective, and using cover plus Conceal meant it rarely had to jink. Reveal was really, really good for removing cover saves from key units and laying into them with laser bikes etc.

Hemlock doesn’t have hover mode so it can’t start on a landing pad.

If the Hemlock had hover it would be so good!

Both the Eldar flyers would be improved a lot with Hover, mainly because it would allow them to be scoring on the final game turn.

These points exactly. Plus, the telepathy primarus is very handy to have on a flyer for hurting FMCs.

Hemlock cant use skyfire in psychic phase, only FMCs can :(((

How does it ignore fnp and RP? I am very curious as I cant stand reanimations or fnp.