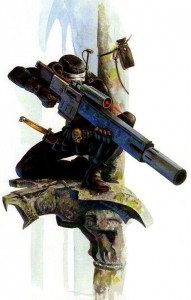 One shot is all this deadly lone hunter needs. Howdy gamers, Mr.MoreTanks back with a review of the Vindicare Assassin.  When it comes to sniping, nobody does it quite like the Vindicare, nor do they look quite as fly doing so.  If you’re looking for that competitive edge to make yourself a better nerd, be sure to check out some more articles in the Tactics Corner.

With an extremely impressive stat line, this guy is the envy of many models in the game that claim to be unstoppable genetically engineered killing machines.  Weapon Skill and Ballistic Skill of 8: Strength, Toughness, and 4 Attacks; 3 Wounds, Leadership 10, and Initiative 7 are all very impressive.  While our 4++ Invulnerable Save doesn’t make us the most durable model ever, it will often be the difference between life and death.  The Vindicare likes to sit away from the action where it can do the most good and stay away from enemy retaliation.  Unfortunately, this Imperial Assassin has one major hang up that prevents it from being a crazy killer like the fluff might have you believe, but in the right situation, the Vindicare can be an excellent tool that can leave your opponent frustrated.  Let’s check out what makes this guy work. 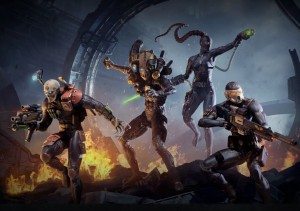 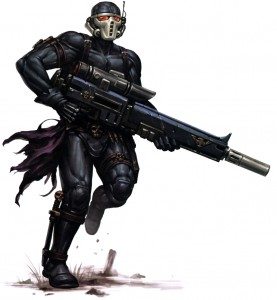 Okay, so first things first, if we want to get the most out of our assassin here, we have to come to grips with an annoying truth.  He’s really not that durable.  That being said though, we are given the tools to try and work around that, Stealth combined with an insanely high ranged gun means that we can hide in the back among Ruins or similar terrain and stay away from the enemy’s wrath.  You’ll want to make sure you’re located in a spot that provides plenty of cover, but also doesn’t impede line of sight.  This can be tricky, but you’ll be thankful when your assassin lived long enough to give you a good return on your points.  3 Wounds is respectable, but with only Toughness 4 and a 4++, all it takes is one roll of a 3 on a die for our Assassin’s mission to be over. 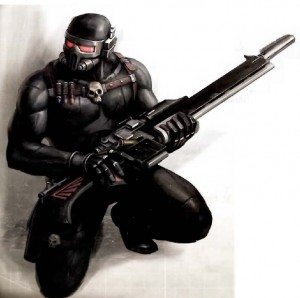 The Vindicare does very well on the top of a Bastion, and can really go to town with a quad gun or lascannon.  The Spy Mask lets you Ignore Cover, which can send pesky Flying Monstrous Creatures or Flyers packing.  Since these weapons come with skyfire. so that the Assassin isn’t Snap Firing, we gain the benefits of the Spy Mask.  Additionally, the Bastion will provide good cover while raising the Assassin up and above the battlefield giving him a good line of sight.  The Bastion also is placed by you, which means that you can ensure that it ends up in a place that can be way out of the enemy’s range while still keeping an eye on most parts of the battlefield.  I really like this pair, but it can be a bit of a points sink.  If you’re playing a heavy reserves army, throwing a comms relay on the Bastion is another option, but I think an Ignore Cover quad gun or lascannon could be really mean when combined with the Vindicare’s Spy Mask.  Something to think about anyways.

The ammo is what really makes the Vindicare special, though we can only use one at a time, these are way we’ll get what we want from our Vindicare.  The biggest issue with being a Sniper weapon is the default wounding on a 4+, this is just like the Invulnerable Save, its simply just not reliable.  This is why the Hellfire round to be is quickly one of the most tempting options for the Exitus ammo, being able to almost totally guarantee that an AP 2 wound that Ignores Cover is placed onto a model that has a -2 to its Look Out Sir! roll is hard to pass up.  The Turbo-penetrator round can be very handy against Vehicles, and should be considered in those cases, but I’d be wary of relying on it against non-vehicle models.  D3 Wounds on anything is fantastic, but only getting that half the time after you hit, can be an issue.  A 50-50 chance simply isn’t that reliable.  That being said, this shot can really pay off for you if you’re attacking a character in a deathstar that you simply need to kill.  Think Loth or a Librarian in a Centurion Star, or a Commissar in a Guard Blob.  The Shield-breaker is cool, but you’re almost certainly better off going for a target without the Invulnerable Save or trying to inflict multiple wounds instead. 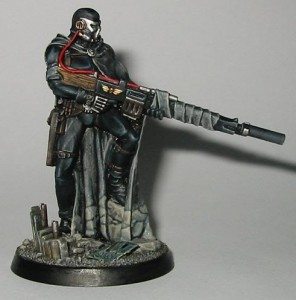 As for close combat, the Vindicare actually gets a lot of Attacks and thanks for defensive grenades can take some of the teeth out of units that might charge him.  He can often fight off a combat squad of Space Marines, or other small unit that can get into the backfield and be obnoxious.  Be careful though, his lack of durability becomes painfully apparent in hand to hand combat.  Close combat is the worse case scenario for this guy, but its an unfortunately reality that he might actually be somewhat prepared for, at least enough to get away from it.

The Execution Force formation is a gun formation, but not really something you want to bring to a competitive game.  All 4 Assassins on the board is pretty hilarious, and can make for some great forging of narratives, but the staggering points costs for this unit means that you should really only be bringing one of these killers to your games.

The Vindicare pairs well with aggressive armies, that way he can stay back and alive while your opponent has to deal with the immediate threats in their face.  Bikes and the Battle Company, especially Drop Pods are an excellent example, along with Knights.  The Assassins can pick out special weapons or close combat weapons and neutralize them so your other forces can react against them with far less to fear. He’s also solid for camping a backfield objective. A good combo we’ve used with him, is to put him in a spare transport vehicle, such as a Rhino, where he can fire out the top hatch and gain some much needed protection.

At the end of the day, the Vindicare is not a bad unit, but it suffers heavily from the mechanics of being stuck at wounding almost always on a 4+, while this can be mitigated by the Hellfire round, getting locked into using only one type of ammo defeats the purpose of having multiple types of ammo.  Combined with his lack of durability, and you can see why this killer isn’t really more prevalent on the table tops.   Don’t get me wrong though, when the Vindicare works, he’s fantastic, but he’s really not as strong as a guarantee as you may like.  Its not a bad unit, just not always a reliable one, but its certainly a fun unit.  Thanks for reading fellow nerds, let us know what you think of the Vindicare below, and may the dice be ever in your favor.  We sell Games Workshop product here at Frontline Gaming at up to 25% off, every day, with those new Assassin clamp packs coming out, you can finally bust out the new Assassins in style.