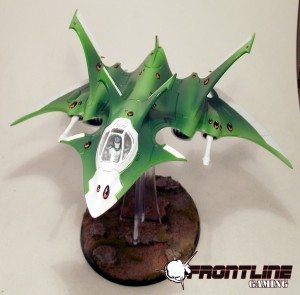 Well howdy again, this Goatboy and welcome to another Eldar review.  Today will talk about the “king/queen” of the skies for the Eldar army – the Crimson Hunter.

The Crimson Hunter is one of the few unit designs that I feel is very well balanced in the Eldar book.  We have an incredibly powerful set of weapons on a very fast platform that while fragile still feels useful.  Sure regular firepower can hurt it but it solves a lot of interesting problems the Eldar army can have with efficient anti air firepower.  Plus it feels very much like an Eldar vehicle that can punish but cannot take any real punishment back. 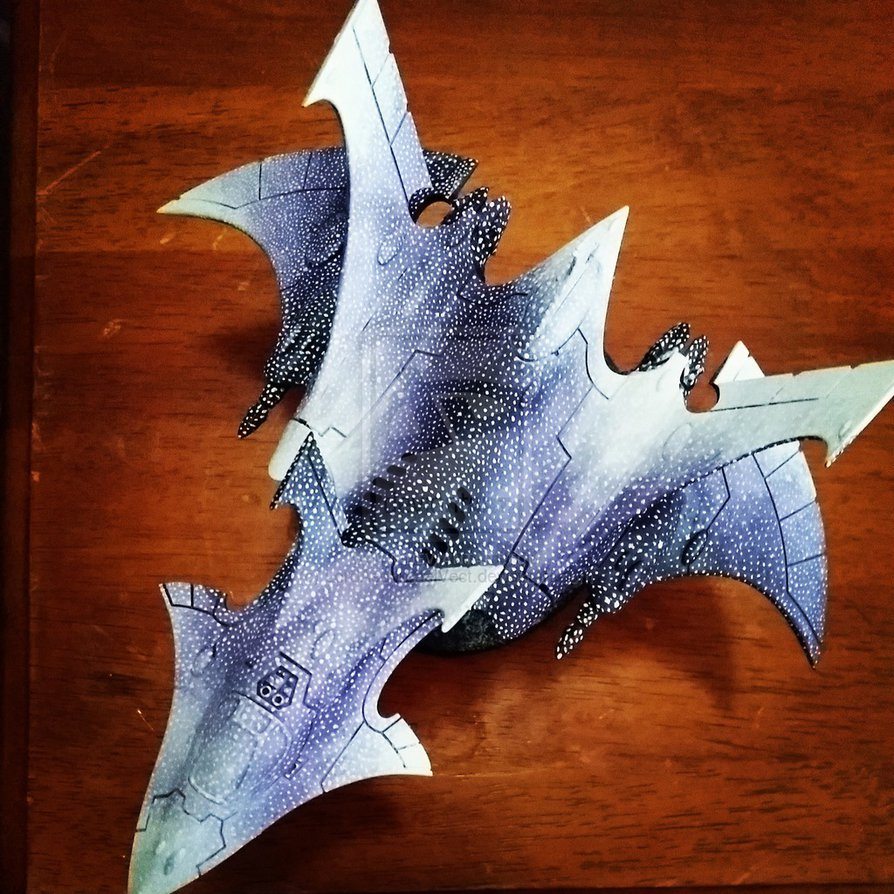 The Crimson Hunter is the Aspect warrior of the skies.  It is equipped with decent weapons has the special rules for a flyer that make it extremely deadly, and the addition of an Exarch upgrade gives this flyer a lot of punch.  It is very weak with Armor 10 on all sides but I see it meant to come in, hopefully kill something, and then dance its way on out as it prepares to come back on the next turn.

The Crimson hunter has 2 Bright Lances (36″ Str 8 Ap 2 Heavy 1 Lance) and one Pulse Laser (48″ Str 8 Ap 2 Heavy 2).  You could swap the Bright Lances for 2 Star Cannons (36″ Str 6 Ap 2 Heavy 2 ) but that doesn’t feel very beneficial.  I think if the Star Cannons had 3 shots instead of 2 we might see them.  You can also upgrade one Crimson Hunter to the Exarch.  This gives it a better BS of 5 and Precision Shots on a 5+.  Overall it is designed to wreck other Flyers and its weapon load out helps it to do just that.

Vector Dancer – This is why he is good.  They can always get you no matter where you hide on the table as they can “dance” around their flight path.

Skyhunter – When shooting at a vehicle with the flyer type the model can reroll armor penetration rolls that do not cause a glancing or penetrating hit.  Remember what I said about King/Queen of the Skies? Yeah, this is your Eldar version of Top Gun!

Precision Shot – Exarch Only – One a 5+ even.  Could be funny to take out specific Heavy weapon teams or an unlucky character. 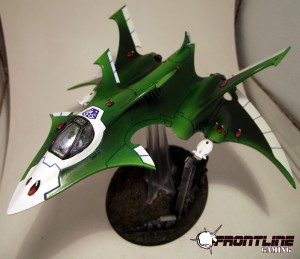 The Crimson Hunter is a thoroughbred air superiority fighter! It lives to hunter other flyers or to prey on vulnerable ground targets and it is quite good at that. With 4 powerful weapons and vector dancer, this is a flyer that certainly pulls its weight. You want to try to go second vs. other flyers, let them come on, and then use Vector Dancer to position it in the rear arc to drop 4 strength 8,  AP2, Skyhunter shots into its target, forcing them to jink or die. He’s also a big threat to any ground vehicles and also quite good vs heavy infantry, particularly T4, multi-wound models.

This is the model you take when you need that extra bit of Anti Aircraft/Anti Tank/Anti Monstrous Creature punch that can go just about anywhere on the board.  Heck even in the Tau Match up which you typically fear as a player with flyers – if you cause them to Intercept against you, you get another turn with the other more important models in your list. This can be particularly useful in the Crimson Death formation where they get a reroll to their Jink, which is excellent for making the relatively fragile models more durable. I think if the Windrider Jet Bikes didn’t have all their massed Strength 6, we might see this guy on the table top a lot more. This edition is not really about the blowing up of a vehicle and instead more of the “death by a thousand cuts” with glances using the power of math. That said, the Crimson Hunter is no slouch and if you use him, he will serve you well.

If you take a single Crimson Hunter, the upgrade to the Exarch is often a good choice if a bit pricey. The increased BS makes those valuable lance weapons more efficient. I can see Precision shot coming into use when you utilize him to pick out important enemies, such as those dang Grav Cannons in space marine units that will not be able to LoS. Do you need to get a round Draigo or maybe kill that Librarian – set phaser to “burn the heck out of him!” Its a shame the Flyer Edition is really just full of Hive Tyrants and Daemon Princes now.  It makes it harder for the Hunter to survive vs. Toe in Cover FMCs, but, if he shoots at them, they are likely to take damage.

The Crimson Hunter doesn’t want to see anything with strong AA  such as Dune Crawlers on the table–obviously–and if you have invested a lot of points in these bad boys you want your ground troops to neutralize those threats ASAP. Also as mentioned, other air units with lots of high strength shots can be a huge threat, like Flyrants.

The real question with the Crimson Hunter is do you take a single Exarch or the Crimson Death formation for all of the awesome upgrades it provides? Either way, if you can get an Autarch in your list, that is a great benefit as he grants you a +1 or -1 to reserve rolls to help you control when your fighter shows up.

Eldar Corsair’s to be precise. And regarding their reckless abandon rule

“A unit which includes only models with this special rule that fires at an enemy unit within 12″ of itself may make an immediate move of 6″ after all effects of the shooting attack have been resolved. If the unit has the type Jet Pack Infantry or Eldar Jetbike, this move is increased to 6+D6″. This move cannot place the unit into close combat, within 1″ of any enemy unit or be used to move them closer to any unit targeted by their shooting attack.”

Though maybe unintentional, it can be read that way

I hope so! Although frankly that sounds kinda broken, especially for Jetbikes.
RAW I’d say yes, but RAI I’d say no (because battle focus doesn’t activate on overwatch).

Yeah that is my thinking.

I’d like the idea of it but who knows.

It’s also after a shooting attack and not an actual run move so I can see it Possibly working out?..

I do love the Crimson hunter and would like to take it more often.
Those ever popular Eldar scatterbike units make it hard to justify taking a lot of already great units in the Eldar book.

The star cannons are a useful upgrade if your meta is full of FMCs, where a slightly higher strength and Lance isn’t as useful as more shots.

I *love* the Crimson Hunter to death – but I think they really come into their own in the Crimson Death formation. First, because you can either boost their survival a lot, or take the 4+ and risk that impromptu AA fire that you might otherwise have jinked against in case of the odd penetration result doesn’t completely shut down the platform.

The re-rolls the formation gives you moves the Exarch into “Your flier is definitely dead” territory. Beyond that, I find that while opponents can come up with a strategy to deal with 1 or 2 fliers, 3 hits some sort of flier-saturation where people start to play less well.

I actually prefer Starcannons on my Exarch all the time- they shoot down Flyrants and Daemon Princes much more effectively than the Lance does, and if you can find AV10/11 on a vehicle (much easier thanks to Vector Dancer) they will really put some work in against airplanes as well. They also make going on strafing attacks a lot more useful, as you can similarly ping rear armor on tanks or cut down MCs/infantry a lot more effectively.

I definitely agree that the Hunter is pretty unimpressive outside of the Crimson Death formation, though; if you’re considering just taking one solo, grab a Nightwing Interceptor instead- does the same job, but is typically a lot tougher.

Also, your middle picture is of a Hemlock 😉

the hilarious thing with the three hunter formation is that it grants a 4+ cover save… not a jink save. and it says if you do link you get to reroll your cover save.
It may be an oversight but RAW I’m pretty sure things that ignore link won’t ignore the cover save the formation gets

Yeah if the weapon says ignores jink (I think the hydra and sicaran do that) but not ignores cover then They’d get the straight up cover. Too bad heldrakes can’t sky fire their baleflamers!

How the mighty are fallen!

Not really a fan of the Crimson Hunter. With only a basic jink save you don’t get a lot of mileage out of them.

The Nightwing is where its at for my money. While its not jink or die, double bright lances, double shuriken cannons is a serious threat. With its 2+ jink save it either gets ignored or laughs at your AA. Mine has only been downed in 2 games out of 40.

Not a game changing unit but its cheaper than a Hunter, more survivable and comparable punch. I love mine.