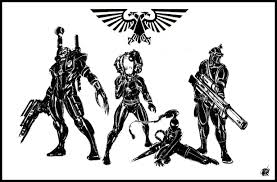 Clover362 here again to talk about the Imperial Assassin formation Execution Force.  As you would expect, Games Workshop has written rules to allow you to use (and therefore purchase) all four types of  Assassins of the Imperium at once.  Is fielding all four Assassins a competitive choice for your games of 40k?  Let’s take look.  For more reviews and tactics articles make sure to check out Frontline Gaming’s  Tactics Corner.

When deciding on whether to include a specific formation, you want to evaluate the total cost of the formation, how the units in the formation will fit in with the rest of your army, and do the added special rules make up for the lack of flexibility in what you are taking.  The Execution Force is fun but at the end of the day costs too much for what you get to be a competitive choice.

The Execution Force is made up of exactly one of each of the four Assassins, a Vindicare, an Eversor, a Culexus, and a Callidus.  Because you must take one of each type of Assassin this Formation will always clock in at 570 points.  That is a big chunk of points for any army that is 2000 points or less. 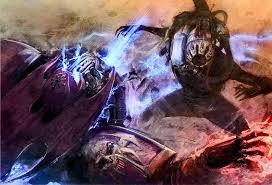 As a reward for taking all four of the Assassin types, the Execution Force provides the following special rules:

Preferred Enemy (Warlord)-  This is a nice fluffy rule that gives each Assassin preferred enemy against your opponents Warlord and, the way I play it, any unit that the Warlord has joined.  Re-rolling 1’s to hit and to wound is really good with the Assassin’s stat line.  Since they are all over BS 5, you will practically never miss with their shooting attacks,  and  you will hit and wound significantly more often in close combat.  That’s a nice buff and will improves each of the Assassins when they are targeting your opponent’s warlord but this does nothing for them against the rest of the Army.

Operation Assassinate–  If you are playing a mission that uses victory points, this special rule awards you 1 extra victory point if the warlord was removed by a wound caused by one of the Assassins.  Under the ITC, this extra point would count toward your maelstrom total.  A point can mean the difference between winning and losing, but this is not going to come into play often enough to be that significant. 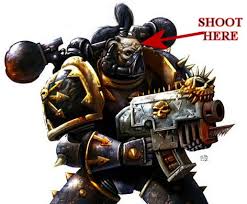 Is it Worth it?

During 6th edition and the beginning of  7th edition many tournaments did not allow you to duplicate detachments.  Thus, in a tournament setting if you wanted more than 1 type of Assassin in your list you had to take the Execution Force.  The Vindicare is a good unit that can create some amazing combo’s and the Culexus is an absolute game changer.  The Eversor and the Callidus aren’t “bad”, but they are not particularly amazing either.  So if you wanted both the Vindicare and the Culexus it was easier to justify the Execution Force’s price and relatively dead weight.  These days most tournaments allow you to duplicate detachments so you could in theory bring both a Vindicare and a Culexus without paying the “tax” of bringing an Eversor and a Callidus as well.  The preferred enemy warlord special rule is a nice little buff but it does not improve the Callidus and Eversor enough in my opinion to justify dedicating 570 points to bringing all 4 Assassins.  In an 1850 point army, you are investing nearly a third of your points in 12 T4 wounds that will disappear to a Krak Missile shot by failing a 4+.  That’s too many eggs in one basket.

With all that said,  The execution force is a fun and cool formation.  It’s cool to throw down all your Assassins and watch them run around trying to murder your opponent’s Warlord.  If you decide to bring the force I would recommend making two other investments.  Bring an extra Rhino or Drop Pod (assuming your other detachment is Imperial, of course) for the Culexus, Callidus or Eversor to ride in.  The Rhino extends the Culexus’ anti-psyker bubble and you can still shoot most of your ranged attacks every turn and then Flat Out with the Rhino as the Culexus shoots in the psychic phase. It is also a great platform for the Vindicaire to fire out of the back hatch. The Rhino can get your assassins to your opponent and should only expose them to one round of your opponent’s shooting before they can mix it up in close combat. The Drop Pod is awesome for the Culexus to come in and nuke a psychic death star, or it can be a delivery vehicle for the Eversor, putting him in a good position to get a turn 2 charge. The other investment to consider is to buy a Plasma Obliterator for your Vindicare to man.  Nothing melts units quite like a 10″ AP2 blast that ignore cover! He is seriously devastating on that thing.

I find that if you use the Eversor and Callidus as pressure units, the Culexus as psyker defense/harassment and the Vindicaire as a sniper (duh!) the 4 models can compliment one another very well. This formation may not be the best, but it is a ton of fun, characterful and good enough to put on the table top and not feel like you’re going to embarrass yourself!

The Vindicare’s Ignores Cover ability doesn’t actually work with the Plasma Obliterator. Or any Blast Weapons he might be able to use. It specifically only activates on a successful To-Hit Roll, meaning it doesn’t work with attacks that don’t Roll To-Hit.

If the OFCC is as open on Army Construction this year as the last couple, I’m seriously considering running two Execution Forces, along with another three Vindicares and another three Eversors.1995 Points, 14 Models. Should make for some fun cinematic action on the table, and it’ll be incredibly easy to pack and transport 😀

Not sure I agree with your rules interpretation, you still role to hit with blast weapons you just use a slightly different mechanic than a simple d6. Might be worth sending in to the ruling team for the ITC.

I think a really strong tactic is to take two Vindicare Assassins… doubling up means you can essentially obliterate the cover of venomtrhopes before a drop-pod assault, snipe characters effectively, pop ethereals, etc. from a great range, and even get around the shielding on an IK. Not to mention if you get some skyfire on mysterious objectives… ouch! Not always practical, but taking two of them is a lot of fun! *sings Crossfire theme song from the 90’s*

Fun? Yes! Competitive? No, not really. Assassins are ballers and are really cool but that t4 is simply not good enough unless backed up by eternal warrior. Far too many blast/plate weapons with at least strength 8. A single assassin you can risk it and hide them with LoS blocking terrain but the more you get the more you are doubling down on something that commonly and reliably will be an issue.

Yeah, they are good, but not amazing.

For shits and giggles I really want to run the Execution Force with the Harlequin Hero’s Path formation plus Champions of Fenris. Army of Independent Characters, yes please!

At last TSHFT a guy brought the Execution Force with Champions of Fenris and they were all modeled as the Avengers. Awesome looking army. I don’t think he won a game, but won best army going away.

Battle report of ‘the Avengers’ vs Farsight and his seven samurai. Make it happen.

With the Pheonix Lords? That’d be epic!

If only the Phoenix Lords had a formation to include them all!