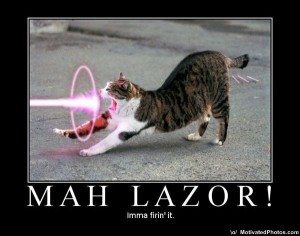 Diamonds may be a girl’s best friend, but a prism is most definitely not.  Especially if you’re staring it down.  Howdy fellow nerds, Mr.MoreTanks with an article on the flashiest of all the Engines of Vaul. Be sure to check the Tactics Corner for more great articles!

The Fire Prism tank gives us a lot for a mere 125 points.  BS 4 on an AV 12 front and side Fast Skimmer Tank with 3 Hull Points is a solid chassis.  Additionally, the prism cannon’s range of 60 inches means that we can stay way out of range for most things that would be a concern to us.  The main gun also gives us lots of flexible target options that mean there is rarely a Shooting Phase were we won’t have something worth firing at.  If we lose our cannon, we can still Tank Shock and have the ability to cross remarkable distances in single turn.  Durable, packing firepower, and fast, this tanks got a lot to love. 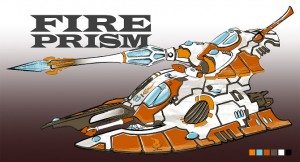 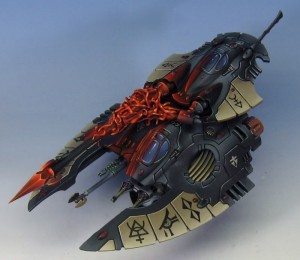 The Linked Fire rule seems cool, and I want to like it, the fact is though is that it will basically always be better to have multiple shots hitting a target as opposed to a slightly more powerful one.  The only time you’ll really ever use this rule is when you’d have a Fire Prism stuck behind cover, which if you’re smart, shouldn’t be very often.  Stranger things have happened though, so its a nice option to have.

The really awesome aspect of the Prism though are the three firing modes on the cannon.  The different firing modes make it so that we will essentially always have a worthwhile target.  We can threaten hordes, MEQs, MSUs, bikes, Windrider Jetbikes, all of these with the large blast.  Strength 5 AP 3 is seriously no joke as anyone who’s been on the business end of it will tell you.  With the prevalence of Battle Companies, bikes, and Jetbikes, this may often be your go to firing mode.  Eldar don’t typically struggle against large units, especially with the abundance of Scatterbikes you’ll have, but having access to a Large Blast weapon is very useful and not very common in the Craftworld book.  As for the second mode, Strength 7 and AP 2 Blast is a very useful tool for tagging Centurions, Grey Knight Terminators (are there any other kind?), and similar models.  This is the one firing mode that I think is the most justifiable for using the using the Linked Fire rule, but again, it would likely be way better to just shoot a unit twice with the blast.  Finally, the lance shot can be quite useful for hitting a Super Heavy.  This shot type is somewhat meh to me, mostly because the Eldar have a plethora of D weapons and other tools for wasting big heavily armored vehicles.  This is what you’ll use if you don’t really have a better target for your Prism.

As for the upgrades, the Holo-fields are fairly justifiable, but the must take are probably the Spirit Stones.  Being able to remove the negative effects of Shaken and Stunned are quite handy, and despite them being not necessarily a guaranteed effect, a 2+ is good enough odds to justify them.  It still seems weird on GW’s part to not just have them work always, but whatever.   The Fire Prism perhaps more than any other Eldar vehicle REALLY doesn’t want to be stuck Snap Firing at the enemy, it makes 2 of our firing modes (which are the best ones) totally unavailable.  It also removes our option of cashing in on our Linked Fire rule.  Basically, you can justify spending points that remove any chance of you getting stuck Snapping.

This can be done well thanks to the shape of the vehicle by using the terrain on the battlefield to our advantage.  All we have to do is cover 25% of our tank with terrain.  Ruins, especially like those handy new ones from the awesome Frontline Gaming terrain studio and shop, make this very easy and avoid the necessity of Jinking.  Just have the turret peak out from behind the wall with the majority of the tank behind the ruin and go to town.  Ignore cover is a thing, so make sure you’ve got those Holo-Fields.

Should the worse happen and you lose the prism cannon, your tank is far from useless.  This fast skimmer can Tank Shock with the best of them, and I don’t imagine I have to tell you just how powerful that rule is.  Being able to kill big and obnoxious large units by Crunching them through smart positioning can really catch your opponent off guard.  Ramming this tank down your opponent’s throat will likely be one of the last things that they will be expecting you to do, and will make what your opponent may have initially thought was no longer a threat become a real target priority for your enemy.

The Fire Prism can actually be a competitive and functional option.  It can be really refreshing to bring units other than the same old, same old.  The Prism’s ability to threaten essentially any enemy unit makes it a frankly easily justifiable unit.  And remember, Frontline Gaming sells Games Workshop product at up to 25% off, every day.  Thanks for reading fellow gamers, stay frosty, and may the dice be ever in your favor.

I always want to take one, but always find something that i need to take over the fire prism.

Just a side Eldar note about scatterbikes. Ok not really a note. Just something that I wish was different.
I do love scatter bikes, but wish the weapons were still 1 to 3 or even just two per unit or something of the sort. I think that would allow more creativity within army lists as you would see other units more often. Maybe more serpents or war walkers for example.

The Fire Prism’s gun is actually fairly solid, since it has good firing modes against lots of different types of targets. However, it’s typically overshadowed by other units because it is a generalist tank and many other Eldar generalists can do most or all of its jobs relatively well- for example, Bladestorm allows basic infantry to deal effectively with MEQs and MCs, etc.

The Linked Fire rule is very cool and thematic, but its design is rather baffling, especially when compared to the Night Spinner’s similar rule. Both of them allow you to combine the shooting of multiple tanks in order to increase the strength of the attack, which is good, but the Night Spinner maintains its multiple shots whereas the Fire Prism does not. I really don’t understand why.

Yeah I fully agree with you puppy. The prism as a single vehicle is pretty good, but as a unit they really lacking. If the prisms worked like the shadow weavers and they all fired, but with increased power they would be great.

I started playing competitively at the tail end of 5th (going into 6th) and have yet to see more than 5 of these in all my games.

Yeah i rocked a pair of them in 5th and just never found they performed as hoped…back to falcons and serpents for me.

If they had an additional special rule allowing them to do something unique and Eldar-y they could have potential, or even if somehow they could get Ignores Cover, but alas. Such cool models.