The iconic choice for the Eldar army and the go-to HQ for the codex, not to mention arguably the most powerful psyker in the game: the Farseer. Check the Tactics Corner for more great articles! 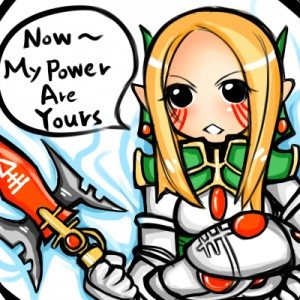 The Farseer is one of the few units around that not only lives up to its fluff description, but does so in a way that is fairly consistent with the way that GW wants it to function. While it’s not picture-perfect, by and large they function the way they are supposed to and can support a wide array of options and strategies depending on how they are used. A Farseer’s strength is not in its raw stats or equipment, but rather in its flexibility and access to powerful psychic abilities- they can effectively be customized game-to-game by selecting the right set of powers to do the job you need. 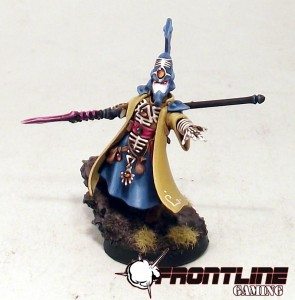 The Farseer comes equipped with a pretty standard Eldar statline- middling Strength and Toughness values and good Initiative. As a non-combat unit, their Weapon Skill and Ballistic Skill are surprisingly good at five each, but with only one attack they aren’t going to be winning a lot of tough fights except by blind luck. Three wounds and Leadership 10 make them pretty good at the psyker game as well as in supporting their squad, although like all Eldar they need to be exceptionally wary of mid-strength attacks due to the ease of causing them Instant Death. And with a base price of 100pts, they are cheaper than any other ML3 psyker in the game- not to even mention their bonus abilities.

All Farseers are Independent Characters and Mastery Level 3 Psykers, as one might assume; they also have the Ancient Doom rule that gives them bonuses and penalties when fighting Slaaneshi models. All Farseers also have the Battle Focus rule, although ones upgraded to Skyrunners cannot make use of it (since they cannot Run, being on a bike)- however, their having it means that they don’t deny other models in their unit the ability to take advantage of the rule. Farseers on foot have the Fleet rule, but ones on bikes do not- an important factor to remember, even if you’ll still always take the bike.

Farseers also have a fantastic rule that by itself is almost enough to make them one of the best psykers- Runes of the Farseer. Each Farseer can, once per turn, reroll any number of dice of your choosing for a psychic or Deny the Witch roll- this can be used to dodge a Perils result (hopefully), turn a failed test to a successful one, or even increase the warp charge harvested on an already-successful test in order to make it harder to shut down or to benefit from Focused Witchfire. Being able to selectively reroll dice is huge, as it vastly increases your chances of succeeding with a given roll and makes them much more efficient with psychic dice.

Farseers can select from the Telepathy, Telekinesis, Divination, Sanctic Daemonology, and Runes of Fate disciplines- three of these are exceptionally powerful, with good Primaris powers and many other strong choices in them, and even Sanctic is occasionally useful. Only Telekinesis is really a “miss,” and neither of the other two disciplines you’re lacking (Biomancy and Pyromancy) are pretty mediocre. Note that Farseers do NOT have access to the Runes of Battle discipline, as that is the providence of the other Eldar psykers. 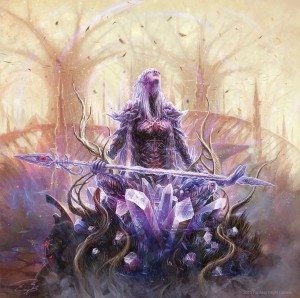 However, Farseers are no slouch when it comes to wargear, either. Though they have no armor save, they come with a 4+ invulnerable save, which is enough to shrug off the occasional wound with reasonable reliability (just watch out for that Instant Death!) A Shuriken Pistol gives them a token shooting attack and a Witchblade lets them potentially wound or penetrate anything in the game thanks to Fleshbane and Armorbane- however, since it doesn’t deny armor saves like most psykers’ weapons, it’s a bit unreliable (and being only S3 means that you’re going to need some hot rolls to punch through the armor on a walker.) For 5pts you can make the Witchblade into a Singing Spear, which is identical but can also be thrown as a 12″ range S9 attack- not a terrible little upgrade if you’ve got some spare points.

The other clutch piece of gear for the Farseer is the Ghosthelm. Any time you take a wound from Perils, you can spend a warp charge to ignore it. Now, since the Farseer doesn’t have access to Maelific Daemonology anymore this isn’t quite as commonplace (especially not with Runes of the Farseer often negating your Perils) but it’s still handy to have, as losing your Warlord to a bad dice roll is really sucky. Most psykers will suffer inevitable attrition over the course of a game just from their own actions, much less damage from the enemy, but Farseers are all but immune to this and can usually keep casting 2-3 spells every turn for the whole game pretty safely. 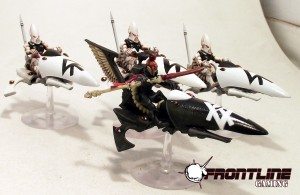 Farseers can upgrade to a Skyrunner for 15pts, which is all but a mandatory upgrade- this gives them the Eldar Jetbike unit type and +1 Toughness as well as a 3+ armor save and twin-linked Shuriken Catapult in the deal. For such a low price you get an amazing array of bonuses, and not instantly dying to S6 weapons is a major boon in the mirror match and many other situations. The 12″ movement and 36″ Turbo-Boost also shouldn’t be underestimated, as they can allow you to put your buff spells anywhere you need them before jetting back into safety.

Finally, Farseers can select from the Remnants of Glory list, which has a couple good options on it. The Spirit Stone of Anath’lan is pretty clutch- you can trade your invulnerable save for a -1 reduction to the Warp Charge cost of all spells (to a minimum of one, obviously) for the rest of the turn. As many Fate, Divination, and Telepathy’s most powerful spells are WC2 or higher this is an excellent option for making sure you can keep pumping out the powers every turn without fail. The Shard of Anaris is also popular in certain builds, as it is the only guaranteed way for Eldar to get Fearless in a Jetbike unit; the 40pt price tag isn’t cheap, but in a challenge it can be pretty deadly. 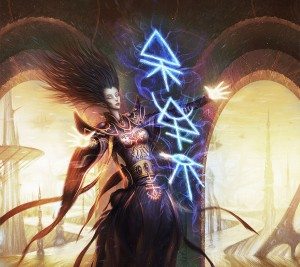 The Farseer is a pretty universal sight in Eldar lists- not only is it a required inclusion in any Craftworld Warhost, it’s the default option for most armies due to their wealth of powerful support spells. An Autarch certainly has its advantages and is worth considering in the right list, but the Farseer is pretty much always going to be doing something useful. There are a huge number of powerful buff spells available to the Farseer, so units of practically any conceivable type can easily be enhanced by them with a quick wave of the hands and expenditure of a couple dice.

Runes of Fate offers several very strong options- its Primaris, Guide, can be taken in addition to Prescience in order to get two reroll spells to buff your army with, and Doom (reroll wounds/penetration) and Fortune (reroll failed armor) are both amazing ways to tilt a fight- note that Doom, since it is a malediction, will affect any non-Eldar units in your army as well, which can be incredibly useful. Eldtritch Storm is also another situational-but-powerful spell, especially if you took the Spirit Stone of Anath’lan; it can reap a devastating toll on large enemy units or tightly-clustered enemies. Fate is a great choice for any Farseer looking to have a mix of army buffs and attack spells.

Telepathy is most often taken for Invisibility, which is a game-breakingly strong buff spell, but Shrouding would be an A++ choice even if Invis weren’t around and Psychic Shriek is one of the most powerful psychic attacks in the game. Even the “lesser” spells in the discipline are all powerful in their own right, potentially capable of crippling units singlehandedly. Telepathy is great if you’re fishing for super-broken powers, want a bit of extra raw offense for your psyker guaranteed, don’t have good targets for rerolls (perhaps because units are already twin-linked, etc), or are facing an army without strong Ignores Cover. 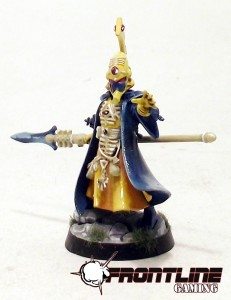 Divination is, of course, practically defined by its Primaris power and often enough you will roll on it just for that, but it’s worth remembering the other spells in the discipline- Misfortune lets even your Boltguns potentially hurt a Knight or other tough target and Foreboding/Forewarning can both be backbreaking spells in the right instances. Though it has a few more “misses” than some of the other disciplines (as well as a healthy dose of WC2 stuff), even Scrier’s Gaze can be game-changing in matchups where reserve timing is key (for example, bringing your flyer in after the enemy’s or making sure your Wraithguard arrive as soon as possible.)

In short, the Farseer has three different disciplines with a strong mix of powers and a great Primaris in every one. You can justifiably roll all your powers on one table, roll them all on separate tables, trade some out for Primaris, trade all of them out, or any combination of the above. You have potentially game-changing tools against every army out there available to you, and this ability to effectively change your “list” every game will serve you in great stead if you pick wisely.

However, first and foremost a Farseer is for buffing your other units. They certainly have access to more than a few good attack spells and debuffs, but since they are almost certainly going to be your warlord and likely hanging out with a fragile unit of jetbikes, you’ll need to play conservatively with your positioning most of the time and hence will mostly be close to your own units rather than the enemy’s. In this role the Farseer excels- many games, having Prescience, Guide, and one other random spell will easily be enough, getting you through the whole game effectively.

For this reason you’ll often want to look to what sorts of units you have in deciding what sorts of spells to roll for. If your units have innate rerolls of their own, you might do better to aim more for Telepathy, since the Primaris powers of Divination and Fate won’t much help there. Make sure you have good targets for the sorts of spells you’re going to be rolling for, and don’t ever be afraid just take the Primaris and switch to another table if the power you just rolled was garbage. 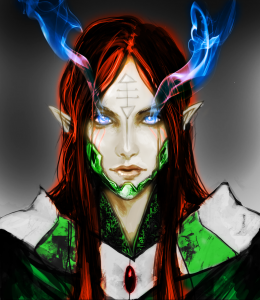 A Farseer’s strength as a psyker is not just that they have lots of good spells available to them, but that they can cast those spells more often than not. With 3-4 spells available and an average of 7 dice per turn, plus the benefits of rerolls and WC reductions, you are highly likely to get two spells per turn and reasonably likely to get three each turn- very few other psykers can match that consistency, and certainly not on as few dice as a Farseer can.

If you’re looking for an Eldar HQ, most of the time you need not look any further than the Farseer. With an excellent combination of utility, cheapness, mobility, and resilience, there’s very few armies where the presence of one won’t be extremely useful.