An oft-overlooked part of the Eldar codex, the Autarch can be a surprisingly-useful addition to armies in several different roles- and he comes with some of the best toys around.

The Eldar Autarch nominally fills a role somewhat similar to the Captain, Chaos Lord, Warboss, etc, from other armies- a generic fighty HQ that leans heavily on his statline and wargear. However, unlike many of these other units the Autarch is not only not garbage, he’s actually a very helpful utility character that can bring several different roles to the party for a pretty budget price. His wide variety of upgrades and above-average statline in the relevant places make him an excellent second-line unit for a lot of jobs, even if he may not be top-tier at anything. 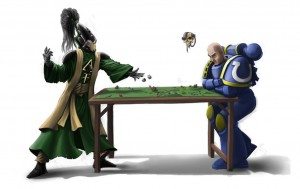 The Autarch, as mentioned, comes with above-average stats almost everywhere; he gets sixes in Weapon Skill, Ballistic Skill, and Initiative,meaning he strikes before almost everything in the game, usually hits on 3s in melee (even against a lot of other HQs), and hits on 2s in shooting. While Strength and Toughness 3 are rather low, we can get by on them, and three wounds and three attacks are both on-par with most anything else, as is Leadership 10 and 3+ armor (although it’s worth noting that this is better than any other non-unique Eldar HQ gets.)

He is, of course, an Independent Character and has Battle Focus and Fleet (though he trades the latter for a Jetbike if you upgrade him to a Skyrunner) as well as having Ancient Doom, which provides some positive and negative abilities while fighting Slaaneshi models. More importantly, he has Path of Command, which allows you to add or subtract one to the reserve rolls of any friendly unit, chosen on a case-by-case basis. This last bit is the key, as he allows you to either bring in units as soon as possible or attempt to hold them off until later- though the later is still only successful half the time and is thus often a less useful choice. But if you’re banking on the arrival of a particular unit (like, say, some Deep Striking Wraithguard) he can be incredibly clutch in keeping a battle to your pace. 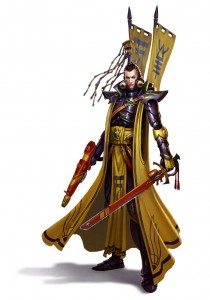 His equipment is where the Autarch really begins to shine, however. He comes native with a Forceshield for a 4+ invulnerable,  a pistol for token shooting (and to gain a bonus attack if he buys any other weapons), and Plasma/Haywire Grenades, allowing him to assault into terrain as well as finish off vehicles with pretty good proficiency. If that were it, he would be resoundingly unimpressive, but he also has access to wargear cherry-picked from virtually all of the Aspect Shrines, and they have some very good toys indeed.

Most obviously, he can take any of three delivery methods- jetbike, wings, or warp generator- to get him across the field with any squad he’s following. As the bike gives +1  Toughness as well it’s the default choice, though the flat 18″ move from wings can be pretty sneaky as well. He also has the option to pick either a Banshee Mask or Mandiblasters, though he can’t get both. Since even a single Mask in a squad prevents the enemy from firing any Overwatch at all, it is usually the more useful (and cheaper) choice.

He can swap his Shuriken Pistol for a Fusion Pistol, though the short range on the latter makes it a rather unattractive proposition in most cases.

The big score, however, is that he can pick any two pieces of weapons off a larger list, most of which are quite cheap and several of which are quite good. It is important to note that these are additions to his wargear, not replacements- because of this, he will virtually always get the +1A bonus from paired weapons. He can get a Scorpion Chainsword (+1Str melee), Avenger Catapult (two Rending shots), Lasblaster (three S3 shots), Deathspinner (two monofilament shots), Fusion Gun (one melta shot), Laser Lance (AP3, +3Str when charging), Power Weapon, or Reaper Launcher (S5 AP3 three shots.)

My own Autarchs’ inevitably end up with the Fusion Gun and Laser Lance, giving them a powerful melee weapon on the turn they charge (with five S6 AP3 attacks, no less) and a good anti-tank shooting weapon to break transports and other tough targets. As both these weapons are a mere 10pts, this setup costs practically nothing for a pretty functional multipurpose guy, though taking the Lance does necessitate taking a jetbike.

He may also pick from the Remnants of Glory, though none are exceptionally impressive for him. Shard of Anaris can make him into a very dangerous combatant, though you almost certainly want to have another weapon to back it up with, since it has no AP outside of challenges. 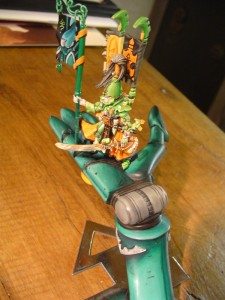 If you’re taking an Autarch, it’s because you chose not to take a Farseer for some reason- so it had better be a pretty damn good reason. Typically for me, it’s because I’m leaving 400+pts of units in reserve and I don’t want the dice to fuck things up for me, which the Autarch is perfect for. You get the reserve bonus even when he’s not on the table, which lets you play better reserve games, and you have a lot of control over it- especially if you also rolled the Strategic trait that lets you reroll reserves. For armies using Webway Portals, Crimson Death formations, or even just lots of Windriders when going second, the Autarch can be a godsend.

However, that alone isn’t often enough to justify him- he’s 70pts naked, after all, and hence the extra kit I buy for him to keep him alive (since he’s probably my warlord) and functioning. A melee weapon, especially the Laser Lance, will let him pounce on weakened units in his area- five Tacticals will almost certainly fall to him, bar extremely bad luck. The Banshee Mask also plays into this, since it means you never need to worry about the other guy getting lucky dice on Overwatch- and it also lets him shut down enemy units with powerful Overwatch abilities, like anything with flamers, by being the first one to go in for a charge attempt; once he’s in base with the enemy, your other units can assault in safely, assured that those templates won’t be doing any damage. His Haywire Grenades are also useful here, since they can tick an HP off of tough targets like Knights, Stompas, and Scorpions, albeit only one per turn.

The Fusion Blaster also helps in this regard, letting him solo-kill things that would be well out of the reach of most HQs- and the speed of his Jetbike movement lets him easily get in range of such targets if you want. Other shooting weapons have some arguments for them; Deathspinners can put damage on most anything, the Reaper launcher is great for cutting down infantry, etc, but I think at the end of the day shooting is not the strongest point for the unit, so having a “solution” gun on him is the best bet. It’s not often you get reuseable BS6 melta weapons, after all.

However, with all of that said it’s important to remember the limitations of an Autarch- at the end of the day he’s pretty fragile even at the best of times (T4, 3+/4++, W3) so you can’t just throw him willy-nilly after any target that you see around. He typically wants to play a bit like a bully, going after things that aren’t big enough to threaten Eldar infantry and vehicles but not so tough that you need a Wraithknight or the like to deal with him. In this regard he can take a lot of pressure off other units in your army, since he can comfortably handle a Combat Squad or transport by himself by firing his Melta into it and then assaulting the survivors with his Lance. This can backfire on you if you whiff all of your first-turn swings, of course, but such is the nature of dice games.

He can also be taken in the War Host detachment in the Heroes of the Craftworld auxiliary slot. Here he also gains the very cool Matchless agility command benefit, giving him an automatic 6″ run. Not bad! 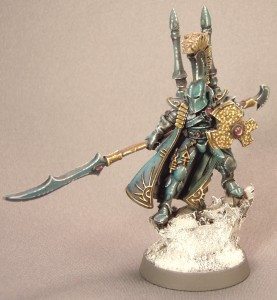 The Autarch is always a choice you’ll make for a specific reason because you need something particular that he does for an army, not just because you weren’t sure what to bring. However, within that context he is one of the better utility-type HQs in the game, mainly because of the fact that he actually has abilities and gear that matter. Would that GW made more such leaders in their mold, rather than the “bland guy with no abilities and no special wargear” type that are much more common.

As always, share your thoughts on the Autarch in the comments section! And, we here at Frontline Gaming sell Games Workshop product at up to 25% off, every day.