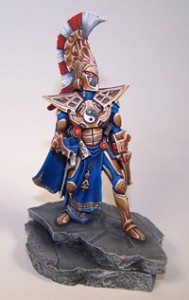 Zyekian here and today we check out Asurmen, the first of the Phoenix Lords and progenitor of the Eldar aspect warriors.  The Hand of Asuryan packs a solid punch, but tends to have his utility overlooked by most 40K players who don’t give him a second thought.  So let’s get to it!  As always, be sure to check out the Tactics Corner for more reviews and articles!

A Phoenix Lord for Fun & Profit

Along with being the consummate Eldar HQ, Asurmen begs to be taken as the Living Legends component of a War Host formation.  Asurmen rocks the P-Lord attribute line: WS/BS:7, S4, T4, W3, I7, A4, Ld10, and 2+ armor.  He also comes with the standard rules for his kind including Eternal Warrior, Battle Focus, Fearless, and Fleet.  That’s not going to justify his point cost north of 200 points though, so let’s look at his wargear and special rules and what differentiates him from his Phoenix-comrades.

Being the sensei of all Dire Avengers, Asurmen incorporates their two special rules: a BS2 overwatch and counter-attack.  This gives him a great deal of flexibility in terms of what unit to run him in, as he becomes both an active as well as passive threat.  Opponents will think twice about assaulting expensive units into Asurmen’s chums.

The first thing that jumps out is Asurmen’s invulnerable save, something that his Phoenix brethren sorely lack.  He sports a 2+/4++ which increases to a 2+/3++ in a challenge.  That’s excellent by itself, however with Fortune he becomes absurdly hard to kill.   Asurmen doesn’t always need Fortune though.  He has the Hand of Asuryan special ability which gives him D3 warlord traits, one of which grants re-rolls on all saves of ‘1’. Either of those combos though will allow Asurmen to withstand a tremendous amount of abuse.

For a lord of a shooting aspect, Asurmen has surprisingly little ranged punch with only a twin-linked avenger shuriken catapult.  Nobody is afraid of being shot by this guy, and against enemies with 4+ armor or worse he’s often better off simply throwing a plasma grenade.  At best we can call it a minor factor in overwatch.  Unfortunately he lacks a pistol sidearm for the additional CC attack. 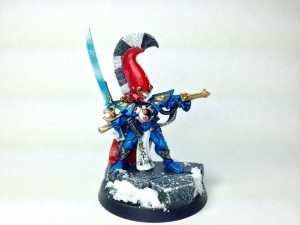 Wargear (aka the He Aint’ Heavy, He’s my Brother section)

During the Fall of the Eldar, Asurmen’s brother fell in battle, his spirit stone placed in a Diresword so he can fight Chaos until the end of time.  The Sword of Asur is a potent weapon that raises Asurmen to S5, AP2, is master-crafted, and possesses a trait called Soulrazor: “When a model suffers one or more unsaved wounds from this weapon, it must pass a separate leadership test for each wound suffered or be removed from play.  Even though the effect on gigantic monstrous creatures is reduced to +D3 wounds, this is still a test Wraithknights and Storm Surges don’t want to have to make.

We have some pieces here and a good amount of potential, we just need to tie it together.  As with other Eldar assault units, the issue is delivery time.  Probably the most obvious way to run Asurmen is with a Farseer running Fortune and rush him right at your opponents’ jugular with support from other nearby units.  Footdar works better in some metas than others but mostly likely a Wave Serpent will be required.  Either way this means a turn three assault is most likely, so incorporate that into your strategy.  Either that or place him in a Dark Eldar transport which will work great as long as the player has first turn or BLOS for the Raider.

Asurmen plays well with others, including his own aspect.  Running him in a Dire Avenger Shrine with 5++ Shimmershield on the unit and Farseer gives the unit formidable staying power and a strong punch.  Asurmen also gels with Wraithguard, providing them with BS2 overwatch and much-needed melee punch.

Soulrazor is actually one of the most potentially devastating powers in all of 40K.  It’s better than a D weapon…  when it works.  As it stands, it’s wholly unreliable power due to large targets such as GMCs having solid leadership values, therefore we should consider de-buffs.  The Hero’s Path Harlequin formation is a good way to infiltrate a Shadowseer emanating a -2 Ld bubble.  The units in that formation also come with stealth and shrouded and are unlikely to be given much attention by the opponent early on.  And then of course Asurmen gets a 2+ cover save Solitaire wing man.

Haemonculi Coven units radiate a -1 Ld malus per detachment.  And if there ever was a good place to run a Succubus with the Armor of Misery’s -2 Ld bubble, it’s with Asurmen.  Using these methods it’s easy to drop leadership by -3 or even more so that Asurmen can really get his soulcut on. 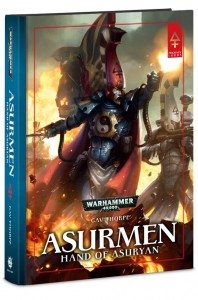 Available in fine infinity circuits near you.

Despite real improvements with each successive Eldar codex, Games Workshop continues to bring us Phoenix Lords that suffer from the same set of maladies: they’re very pricey assault units in a shooting meta, they have problems getting across the map swiftly enough, and they lack an invulnerable save.  Asurmen at least solves the latter of these and figures at least as an early-to-mid game threat to a wide range of opponents.  He’s poor against vehicles and will need to avoid walkers, however the rest of the Eldar codex is so blisteringly good at taking them out that this isn’t much of a drawback.  Overall he’s a flexible HQ unit that functions best when he doesn’t have to be the centerpiece of a list but is taken alongside other durable targets.  Asurmen embedded in a rush of well-stocked Wave Serpents backed by a Wraithknight or durable Coven units will excel at taking and holding objectives, and best of all be enjoyable to play.

As always, let us know your thoughts on Asurman in the comments section! And, Frontline Gaming sells Games Workshop product at up to 25% off, every day!