Their number is legion, their name is death! 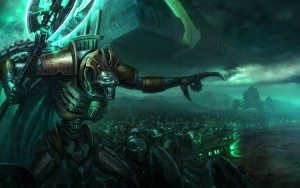 Ages ago, the race that became the Necrons, known as Necrontyr, were a bright star of power in the galaxy. Their short life spans fueled a lust for power and glory that would make their names known for generations to come. This hunger led them to conquer planet upon planet and spread their influence amongst many stars.

Their path for glory brought them into conflict with the Old Ones, powerful beings that allied many races together. This conflict brought death to the young race and almost wiped them out. In a last ditch effort to save their race and their battle, Szarekh, the Silent King and leader of this race, made a deal with another powerful race known as the C’tan. The C’tan took the remaining lives of the Necrontyr and through the process of biotransference, put their souls into metal bodies, whose only desire was to serve their new masters. This deal worked and  the Necrons took their new forms and laid waste to the Old Ones and their allies, but at this terrible cost.

In the last moments of the battles, Szarekh saw what they had become, slaves to the C’tan. He turned the rest of the Necron forces against their masters, a betrayal that would save this proud race, but mark his own Dynasty forever. The Necrons were victorious, and the C’tan were broken into shards, captured and stored in massive vaults to keep them from every reforming and taking their vengeance upon the Necron race.

With the remaining enemy seeking to wipe them out and seeing their glory about to fade, Szarekh made another decision and commanded the forces of Necrons to flee to their vaults on planets all over the galaxy and sleep, until a time would come that their awakened forces combined could again arise and claim the galaxy for themselves….that time…is now. 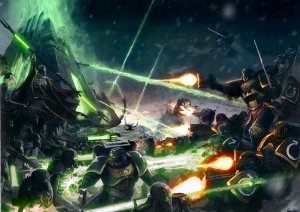 The Necron forces specialize in being resilient. With their Reanimation Protocols giving them an extra chance to avoid taking wounds, they can be incredibly resilient and hard to remove from the battlefield. They have a great codex filled with fast units that can assault or take objectives, combined with a very solid mid-range shooting that has a chance to wound or penetrate anything they face. If you want a force that is durable and has many tools for different situations, then the Necrons may be for you. Combined with the fact that the basic Necron color scheme is easy to pull off and look good, you have a great army for the starting general or veteran gamer.

Forces of the Living Metal Necrons:

The Necron forces rules very much align with the fluff making this a colorful and exciting army to play. Your troops march slowly forward while fast moving units surge the sides to cut off the enemy and crush them in a hammer and anvil. The opponent will struggle as your forces shrug off even the most powerful of wounds with their Reanimation Protocols and will quake in fear as your Wraiths and Scarabs are on them turn two.

One of the great things about the Necrons is you have many directions you can go. You can go hard assault and double down on the Canoptek Harvest and flood the battlefield with fast moving hard hitting Wraiths and Scarabs.. You can go shooting heavy with large blocks of warriors backed up by Destroyer Cults, Annihilation Barges, and the Triarch Stalker to boost your ballistic skill, you can build incredibly durable deathstars with Lychguard or Wraiths and packed in with Characters to make them even more powerful like Orikan the Diviner. You can still go Flyer heavy with Doom Scythes and Night Scythes. Or you can do a mixture of close combat and assault and build your own strategy. The possibilities are quite ample with these metal robots.

There are still some things to watch for with a Necron force however. Necrons are very susceptible to psykers as they have few psychic defenses and no psykers of their own. The Canoptek Spyder can get a piece of wargear to give Adamantium Will to those within 6”, but that is about it. You will need to be careful and find ways to isolate and destroy those pesky units.

Another thing to be concerned about is your leadership. While Necrons have a solid leadership value overall, they are susceptible to things that modify their leadership like losing close combat, wargear that modifies leadership, or facing leadership tests. Outside of Nemesor Zahndrekh, there aren’t many ways to grant Fearless to your core units so you will need to be thinking about this in terms of your long range plans.

Something else to consider when planning your army is how you are going to handle high armor values in the form of vehicles and troops. There isn’t a ton of AP2 and high strength weapons in the Necron codex. The plus side of this is that all of your Gauss weaponry will wound and glance vehicles on a 6, but if your strategy is “roll lots of 6’s” then you may be in trouble.

Overall, one of the great things about the Necron codex is that you have tools for just about every situation, making them a very strong codex right now and a great choice to start into. Check out the tactics article linked above for the best of the codex to form your winning Necron force that will be feared all across the galaxy.

What have been some of your winning Necron Strategies? And as always, be sure to check out the Tactics Corner for more great articles!

← After Christmas Sale! FREE Shipping on F.A.T. Mats!
Signals from the Frontline #399 →