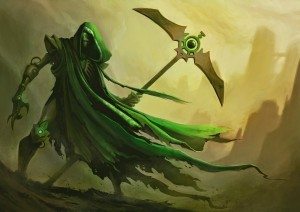 Welcome back to another Goatboy Necron Codex Review.  Today I get to chatter on about the old – super bad ass from the Necron Codex – Vargard Obryon.  This guy went from being in almost every Necron army somewhat of a side player.  The changes 7th brought to the Necron army as well as other unit style changes really effected the overall usefulness of the true Necron beatdown bringer.  Check out other tactics in the Tactics Corner.

Vargard was almost a shoe in for the most taken Necron HQ character, previously.  His offensive ability mixed with a potent set of wargear made him a great force multiplier.  The changes to the Necron’s ability to deep strike around the table really have put a hamper in his old Warrior’s step as well as his loss of his battle buddy known as Nemesor Zandrekh.  I still can see Zandrekh getting used as he is one of the few characters with a stock 2+ save and lets your other HQ options take different artifacts to increase their usefulness.

Obyron is mostly seen when someone takes the Royal Court formation.  His skills and stats set him up as a decent “challenge” taker.  He is missing the extra wound you would expect a character costing this much would have but he does fight better then the entire Necron codex on a model for model comparison.  His Ghostwalk Mantle went from being unlimited use to now just once a game – which hurts his overall utility.  I can see some people using him as your second teleport option in a Lychstar build but it gets very hard to fit him in the limited HQ choices you have using the Decurion Detachment. 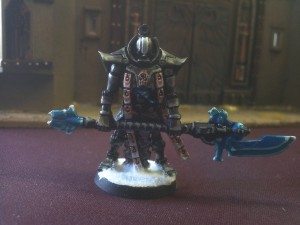 Obyron comes with a stock 2+ save.  He also has the great HtH weapon, the Warscythe. He also has the already mentioned Ghostwalk Mantle which grants the ability for himself and the unit he is attached too to be removed from the table and deepstrike back on in the same phase.  If the deep strike point is within 12 inches of Nemesor he doesn’t scatter as they are the bestest of bros.

Obyron has Reanimation protocols like every other Necron Warrior/Character choice.  He has an increased WS due to his awesome fighting ability (WS6).  He also passes any Glorious Intervention rolls as he always has your back.  In a Challenge any missed attacks by the opponent gives Obyron an extra attack at initiative 1.  He also has the Ghostwalk Mantle as stated earlier to teleport around the table.

Obryon can be used as another Teleport mechanism for combination Lychstars / Wraithstars.  The Decurion is very hard to get Obyron within it as you have to take a Royal Court which leaves you with a lot of tax units. He combos very well with Orikan, who lets you reroll failed saves of a 1. As he has a 2+ armor save, that means he easily gets the dreaded 2+ reroll save followed by a possible 5+ of 4+ RP! Yikes! I have tried to get him set up within a Scarab Farm list that utilizes Obryon, a Destroyer Lord and Orikan to create multiple levels of Reroll 2+ saves to protect the baby scarabs. His ability to teleport gives you more options to utilize multiple levels of protection as well as having the option for other HQ choices that can be helpful – like the Destroyer Lord with the Nightmare Shroud and a Cryptek with the Solar Staff. Combine all of these together and you get a stupidly, annoyingly resilient unit.

I do wish he still had his ability to teleport around the table top every turn as I thought it made him an interesting choice for the Necron codex.  He doesn’t have an Invulnerable save so fighting a Knight (or anything with an AP2 weapon) might not always be the best option for him.  His lack of a 3rd wound is also troubling as some of the other HQ choices are just a better value versus his over-priced Overlord chassis. I think the most damaging hit to his stock is his lack of being able to be included in a Decurion Detachment without also having to take the Royal Court Formation or allying in a CAD.