This Eldar Tactica article discusses the Phoenix Lord, Karandras, the Shadow Hunter. As you’ll learn, whether for good or for ill, he earns his name. If you’re looking for more Eldar tactica to complement Karandras, check out the Tactics Corner.

Although completely invincible units are compelling to all of us, sometimes you want to kill your opponent in style. Karandras is a Phoenix Lord, bound with the experiences and emotions of all the other past Striking Scorpions who have donned the mantle of leadership. He shows it on the battlefield, too, truly embodying everything you’d want the best Striking Scorpion in the galaxy to be. However, of course, no one model can or should be the answer to every need. 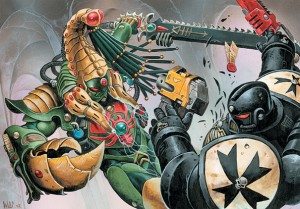 Karandras as a unit in 40k is a hunter. He is theoretically capable of killing any other unit in the game as long as he’s got enough ablative wounds attached in order to survive until his initial assault. He’s also somewhat good at waging psychological warfare upon your opponent’s deployment decisions depending on their experience with the game. 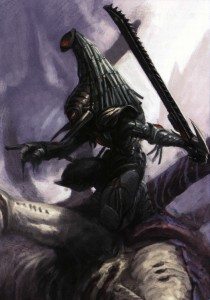 While deployment is arguably the most important skill to learn in 40k, Games Workshop has built Karandras in such a way that, for him, deployment is absolutely crucial and, sometimes, difficult. It would almost be preferable to place Karandras in a unit of 20 Storm Guardians or a unit of Wraithblades to keep him safe until the assault. Unfortunately, the Infiltrate special rule stops him from deploying normally.

Infiltrating isn’t a bad choice for Karandras in some situations.  He can do it either with a squad of Infiltrators or alone. Infiltrating Karandras by himself could actually work if there’s enough line of sight blocking terrain on the table and if your opponent can’t shoot you without seeing you. Also, most weapons which can see through Line of Sight will have his 2+ armor save to contend with, as will most barrage weapons with Ignores Cover. Karandras will also likely deflect higher quality Barrage weapons using his 2+ cover save in Ruins. Karandras isn’t usually worried about being charged, either. His Initiative 7 and Strength 8 are enough to tip the scales in most combats.

Of course, the intent of the unit is to Infiltrate him with a squad of Striking Scorpions. The Codex gives both Karandras and the Striking Scorpions the Shadowstrike Special Rule. This rule gives them Shrouded if they infiltrate, which stacks with their Stealth. Karandras can’t confer this ability to another unit, so he and Striking Scorpions are really meant to be together. The unit still has no Invulnerable Save to speak of, however, so the are very susceptible to a number of alpha striking units with Ignores cover whether through psychic powers (perfect timing), or a piece of wargear (Markerlights, Hunter’s Eye). If your opponent is using these builds, you may wish to chose a different deployment method or simply hope your opponent goes after your Wraithknight or Vaul’s Wrath Support Battery units instead.

Another Infiltration method a savvy player can use is the hand-off. In a hand-0ff, you would infiltrate Karandras and his Striking Scorpions into terrain very near your deployment zone. When you move, you can move the unit you’d rather have Karandras in first, then break away with Karandras and move into that unit. After that, you can Battle Focus to get as many models in front of Karandras as you’d like to risk (if any).

Karandras has clearly also taken lessons from Snikrot. He can use his Hunter’s Strike ability to immediately arrive from reserve on turn 2 and come in from any board edge of his choosing. The only models he can escort with him are, naturally, Striking Scorpions. This ability does a few things. First, it gets Karandras into your enemy’s lines far faster than he would have on his own, and, unlike with Infiltrate, your opponent can’t guess where he might come from on the turn he arrives. Although some assault units like this suffer a great deal since they can’t assault the turn they come in, Karandras and his Striking Scorpions can move pretty fast with Move Through Cover and Battle Focus. Even if your opponent tries to get away, chances are they won’t. 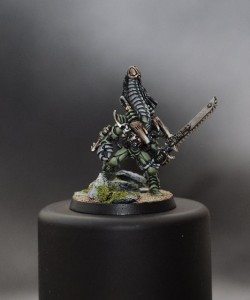 Hunter’s Strike also has two psychological components to it. One is that your opponent may be fearful of Karandras and his crew coming in and wrecking their lines. To combat this, they may decide to deploy a bit closer, or even more spread out in the case of horde armies. When protecting their lines, they’re creating a predictable atmosphere for you to deploy and move your own units. If they aren’t afraid of Karandras or are highly mobile, this advantage isn’t so great. However, it is possible your opponent will forget that Karandras can arrive from any board edge and come a little too close to your own.

Additionally, you could use Hunter’s Strike to move Karandras into a deserted quadrant of the battlefield rather than one full of key targets. In this case, you’ll move into the densest terrain you can find and lie in wait, hopefully near an Objective, and simply dare your opponent to come get some. That seems like a whole lot of points to spend on a gambit like that, but it could be the right thing to do depending on the mission type. Sometimes, for every Objective you make yours, the better off you are, and an Objective with Karandras hiding nearby pretty much belongs to you. Of course, this is a niche scenario. Ideally, Karandras is always facing off against your opponent’s deadliest threats and eliminating them.

For most games, Karandras will at least begin the game in a unit of Striking Scorpions. It may be beneficial to hand him off to a big unit of 20 Storm Guardians and give them a psyker with the Runes of Battle primaris power, Conceal. This would provide the entire unit a very good cover save along with the Karandras conferring Stealth. A giant mob of Fearless Storm Guardians with buffs might be enough to get Karandras into close combat.

Another option might be Wraithblades or Wraithguard. While they are very durable on their own, the Fearless and Stealth which Karandras brings to the table is kind of wasted on them. One interesting choice might be Windriders or even Shining Spears. If you’re running a lot of jetbikes, it might be a good idea to keep a unit or two nearby Karandras, providing their usual fire support. When his Striking Scorpion unit is whittled down to a dangerous number, you can jump the jetbikes forward and he can move into the unit to use them as additional ablative wounds. His Stealth can improve the default cover save of the Shining Spears and the Jink save of the Windriders, making them reasonably survivable. Additionally, you can use these units to slingshot Karandras into assault.  Using the jetbikes’ fast movement, place some models near a key enemy unit and stretch the rest of the models back towards Karandras, then move him into their unit. This can drastically decrease the amount of charge distance Karandras needs to reach an important target.

A Farseer with the Runes of Fate power, Fortune is always welcome for any Eldar unit which wishes to stick around for a while.  A re-rollable 2+ cover save or armor save is nothing to scoff at. Still, with a great deal of Ignores Cover available to some armies, always be wary and place your models with foresight. Even a simple Warlock with Empower can turn the tide of battle for Karandras, giving him Strength 9 instead of 8 in combat versus units such as Imperial Knights who might otherwise be slightly more difficult to kill with his claw.

In a Craftworld War Host, Karandras can be found in the Living Legends formation which competes for 0-3 slots with other fighty Characters and the Seer Council. In most games, you won’t be hard pressed to find room for him in the Warhost, though you may question his expensive points cost. The usefulness of Eternal Warrior has taken a hit recently due to the prevalence of Stomp, but with Karandras’s impressive attacks and high Initiative, he might be worth the gamble, even compared to taking additional Wraithknights with their comparatively poor Weapon Skill, Initiative, and number of attacks.

Karandras does have a part to play in your army if you learn how to use him. If you can’t get past his vulnerability to some alpha strike lists, then you should give him a pass. Personally, I’d put him in my army for the badass dreadlocks alone.