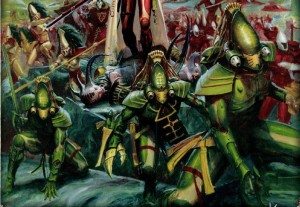 Welcome back to another lovely Goatboy Eldar Review.  Today I want to chatter on about the other red headed stepchild of the Eldar Assault unit options, the Striking Scorpions.  The changes to the shooting of the game as well as the other assault units becoming so much more effective leaves this unit staying in the army box.  Still, they are very neat and have a ton of cool things that while fun are not always the best for the competitive game.

Striking Scorpions are supposed to be the patient hunters of the Eldar army.  They will hide from their prey and slowly work their way to bounce and perform the perfect killing blow.  They wear heavier armor, have much more brutal style weapons, and are set up to be the brute force versus the graceful fighting of the Eldar Banshees.  While their rules reflect this the game really doesn’t seem to care about all of these “fluffy” rules interactions.  I have seen some units of these used as backfield “protection” units or a way for the Eldar player to get line breaker without having to turbo boost Bikes across the field.

Overall their wargear isn’t bad for what they are supposed to be – Infantry butchering close combat fighters.  They have a good save, a good deal of attacks and are not too weak in combat. 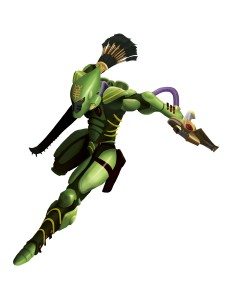 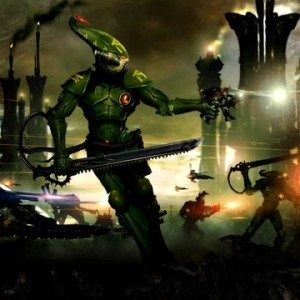 I think personally I have played against them 3 times in all my years of 40k and have found facing them to be underwhelming.  They have a lot of neat rules but the way the game has gotten they just can’t out-assault the true assault units, can’t out-shoot the shooting units, and just cost to much to be useful for a truly competitive list. I could see using them as a way to push back scouting armies but I feel to get them equipped to do some damage just ends up costing you more points then they are worth.  I am happy they have grenades unlike the Banshees (although Banshees are able to effectively ignore charging through terrain penalties in most cases!).  I think if they could take some kind of Fusion Pistol or other shooting weapon they could see some use but as is they just seem like expensive Assault Marine like models without the added benefit of a special weapon.

Now, that said, they are very good at killing the crap out of MSU scoring units and non-dedicated assault units. As stated, the Exarch is what does all the damage. Slaw a Claw on him and let him do his thing. He’s essentially a melee character light, with 2 wounds, I6 and WS5 or 6 with bonus attacks in a challenge. In the Aspect Host (which is a great formation and an auxiliary in the War Host), they gain +1 BS. In the War Host they automatically run 6″ which is awesome for an assault unit. If you run them with Karandras, they can come in from behind the opponent, too. It provides a lot of options for them and he obviously packs a mighty wallop in combat in addition to the Exarch’s already formidable offensive power.

As the unit grants Infiltrate to it’s dedicated transport, you can put them in a Wave Serpent and Infiltrate them or Outflank it! Not a bad way to get them into position and grab good firing position for the Wave Serpent.

Scorps require some creativity to implement well, but they are seriously amazing models and can be great in games where they have viable targets to go after. Check the Tactics Corner for more great articles!