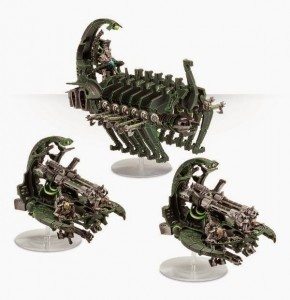 Hello all, the Medicore Gamer here to talk about the artillery formation of Codex: Necrons – The Annihilation Nexus. If you want to read up on more tactics check out Frontline’s Tactics Corner. Also, remember to voice your opinion on the usefulness of this unit!

The Annihilation Nexus is a formation in Codex: Necrons that can serve as your 1+ Auxiliary formation in a Decurion Detachment. (It may come as a surprise that there are more Auxiliary formations than just Canoptek Harvest, but it’s true, I looked it up!)   It consists of two Annihilation Barges and one Doomsday Ark, and clocks in at 410 points. This formation is the only way to get either of these units in a Decurion Detachment. While the formation can be fielded on it’s own, outside a Decurion, it would be relatively rare to see this formation accompanying a Combined Arms Detachment, since the CAD already has access to the models.

Both the Annihilation Barge and the Doomsday Ark are covered in their own tactics articles, but I’ll briefly recap their main points. The Annihilation Barge is an 11/11/11 3 hull point open topped skimmer, with Quantum Shielding, and Living Metal. Quantum shielding means that front and side armor are counted as 13 until a penetrating hit is scored. The Living Metal rule allows it to ignore crew shaken results, and it can repair a lost hull point at the end of each turn on the roll of a six. When taken in a Decurion, Living Metal also ignores Crew Stunned. The Barge sports two weapons, a twin-linked Tesla Destructor, a 24” Str 7 AP- 4 shot tesla weapon, and a Gauss Cannon, which is 24” Str5 AP3, Heavy 2 gauss weapon. It may swap the Gauss Cannon for a Tesla Cannon, which is a 24” Str 6 AP-, Heavy 2 Tesla weapon.

The Doomsday Ark comes with 11/11/11 armor and 4 hull points, with Quantum Shielding, and Living Metal. The Ark backs the biggest non-D gun in the game – The Doomsday Cannon. You can shoot the Doomsday Cannon at a lower profile, which gives you a 24” range Str 8, Ap3 small blast. The Cannon’s high power profile gives you a 72” Str 10 Ap1 large blast – a weapon profile shared by very few other things. It also boasts two side Gauss Flayer arrays, exactly like the Ghost Ark, for which it shares a kit. Each side is a salvo 5/10 Str 4 Ap5 array with the gauss rule, meaning to wound rolls of 6 auto wound regardless of toughness, and glance regardless of armor value. 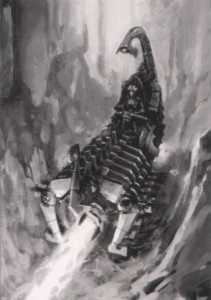 There was a time when the Annihilation Barge was one of the most hated models in the game. It was ridiculously undercosted, and the previous rules on Tesla made it a fearsome weapon platform, against both ground and air. As a result, you would routinely see 2-3 barges in a typical Necron list. But 7th Edition changed that, and while the Annihilation Barge is still quite good, the frequency of their appearance on the table has waned. However, as I’ll explain, I think they may be on the rise again.

Even at its current point cost, the barge is a durable, yet agile and maneuverable weapons platform. Its Tesla Destructor, being both twin-linked, and firing at the Necron ballistic skill of 4, gives you about an 89% chance of scoring a hit on each shot. And you get four shots from that weapon, all Str 7. And that assumes you don’t roll any sixes, because each six counts as three hits per the Tesla rule. On a hot streak, when the sixes rain, the Barge can pump out obscene firepower. Couple that with the two shots from either the Gauss Cannon, or the Tesla Cannon, and what you end up with is a unit that is pretty darn good at eliminating lightly armored vehicles. Now, a year ago that was a bit “meh.” But now, we live in the age of Gladius Strike Forces and a table teaming with Objective Secured Rhinos. And those Rhinos absolutely have to die unless the Necron Decurion player wants to lose on Malestrom points. In that environment, the Annihilation Barge’s stock is on the rise. 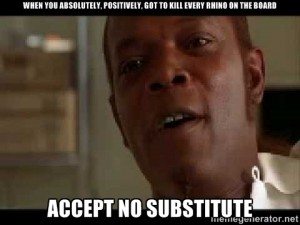 If you really want to double down on the Barge’s role as transport hunter, then swapping the Gauss Cannon for the Tesla Cannon might be considered.  But personally, I find the Gauss Cannon the better of the two choices.  Being Gauss, it can still glance a vehicle with some lucky rolling, so it’s not a useless gun for an anti-transport role.  But it also packs AP3, which gives the Barge some versatility to hunt infantry if no transport is available.

The Doomsday Ark, likewise, doesn’t see the table all that often, but definitely deserves more consideration than it gets. As I discussed in more detail in the Doomsday Ark tactics article, the Ark provides exceptional backfield objective camping abilities, while projecting serious firepower the entire length of the board. As a Str10, AP1 large blast primary weapon, it is also one of the best counters the Necrons have to heavily armored deathstars, centurions, etc.

So both the Barges and the Ark can be very useful in today’s environment. As the units are worth considering on their own, the formation makes some sense for a Decurion Detachment. The special rule is just gravy. But it too is not without its uses. Quantum Deflection, from my experience, is really there to mitigate a bad first turn. Because of the range disparities between the Barges and the Ark, the models seldom stick within 6” of each other as the turns progress, so Quantum Deflection rarely comes into play after turn two. But where it can be quite useful is when the Ark has taken a penetrating hit though a lucky alpha strike on turn one. By keeping one Barge close by the Ark at deployment, the Ark can steal the shielding it lost turn one, and thereby keep it around a bit longer. And since that shield swap occurs at the beginning of the player’s movement phase, the Barge is still free to speed off and close the range for its own weapons, leaving the newly shielded Ark behind.

A last point in this formation’s favor is the effect it can have on your other units. Necron vehicles are no slouch, but a lone Necron vehicle tends to get targeted aggressively, and can go down quick. What this means is that one or two Ghost Arks may not stay around as long as one would like, and this can be a problem as the Ghost Ark is one of the absolute standouts of the codex. For this reason, an army considering a core of a couple units backed up by a two Ghost Arks as their primary objective holders might want to give consideration to the Annihilation Nexus, as dividing the enemy’s anti-tank firepower across five targets can yield rewards that keep the entire force on the table, and doing what it should, a bit longer.