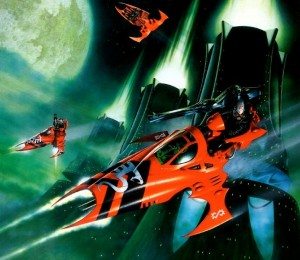 Vyper Squadrons, the wannabe Attack Bike of the Eldar.  These quick little skimmers may not have much in terms of durability, but they can actually pack a decent punch for a reasonable price.  Glass-cannons in the every sense of the word, Vypers can be a useful and affordable means of adding mobile low AP firepower to your force.  For more reviews and tactics articles make sure to check out Frontline Gaming’s Tactics Corner.

As if Eldar needed some help in the firepower department! Like many units in their book though, the Vyper really isn’t that tough but packs a wallop.  40 points nets you a 2 Hull Point fast skimmer with Armor Values of 10 all around; Fast, Open-topped, and Skimmer all make for a pretty fragile little gunship.  There are a couple options though that can help out with that issue, but we’re going to need to be wary of letting points cost spiral with these, because in that case you’re simply asking to be disappointed.  That being said, we’ve got some opportunities to make these guys succeed. 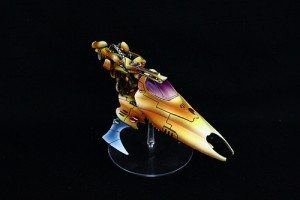 As this is the “tax” unit in both the Windrider Host, Guardian Stormhost and the Guardian Battlehost, all of which are core formations in the Eldar Warhost, so you’ll be seeing them more than you would otherwise. To put its best face on, I think that there are a few upgrade options that can warrant consideration, or rather there is one, Holo-Fields does dramatically increase the cost of the Vyper, nearly 50%, but having access to a 5+ Invulnerable Save can be clutch.  Any chance to not Jink is also critical, as doing so will make the Vyper nearly useless for the next turn.  I have a close friend who plays Dark Eldar and he’ll tell you how much more worthwhile it is to not Jink and simply trust your 5++.  However, if points are tight, this can easily be one of the first things to cut; on top of that, it’s likely better to simply add another Vyper to the unit for only 25 more points than getting a Holo-Field.  I would strongly advocate not picking up the Field if you have more than one Vyper in the unit, the cost for the unit will simply be too high.

With that in mind, you’re going to have to use terrain to screen your vehicles; be careful though, you’ll need to be wary of actually placing the base in terrain.  We all know how easy it is to roll that 1 when taking a Dangerous Terrain Test.  The thing is though, we can still make the use of terrain and not jeopardize the integrity of our vehicle.  Remember that for vehicles, line of sight is drawn from the gun; the main gun on the Vyper sits way up and sticks out quite a bit, probably high enough to sit above a large piece of ruin or hill while obscuring the majority of the Vyper’s frame.  It doesn’t make the vehicle invulnerable, but it prevents the need to Jink and lets you still protect the Vyper while shooting at the enemy.

So let’s assume we’re going to settle for 1-2 Vypers, for now, without Holo-Fields; now comes the time to pick our guns.  I don’t think you ever want to swap out the catapults, the upgrade cost is too high.  I think in most circumstances you’ll want to upgrade the shuriken cannon, probably the Starcannons, they’re a cheap upgrade and the gun is actually a good tool for the Eldar to have.  36 inches with Strength 6 and AP 2 on a Fast Skimmer is a very big threat range, and I don’t think I have to tell you how great those stats are.  90 points for two Vypers with starcannons can lay some hurt onto a Centurion unit while staying out of their range for retaliation.

I’m not going to beat around the bush here, if you’re looking for a reliable and affordable gun platform for the Eldar, the War Walkers are probably a better choice.  Still, its hard to beat the ability to redeploy the way that the Vyper can, in some ways, it can make up for the benefits that the War Walker offers.  At the end of the day though, I don’t think Vypers necessarily warrant the dismissal they so often receive, they suffer from what most average to above average units in the Eldar book suffer from, they’re not Scatterbikes, Wraithknights, D-scythe Wriathguard, or Farseers.  You’ll find though, that these pair very well with Vypers.

So remember the basics, keep to cover, use your maneuverability, keep the units small and points efficient (cheap), and stay out of range from your opponents as much as you can.  Keep your chins up and your heads down fellow gamers, mostly because it looks funny and I could use a laugh.  Game on, and may the dice be ever in your favor.