Today, Loopy talks about his experiences using the rarest of Eldar shock troops: the Storm Guardians. If you’re looking for more Eldar tactics, such as for the Guardian Stormhost, check out the  Tactics Corner.

Although you will probably see or use Eldar Storm Guardians very rarely in your games of 40k, the unit can play a role in some armies and in some formats. Although they are fragile and won’t kill a deathstar anytime soon, there’s far more to this game than simply killing models. Besides, what’s not to love about a millennia-old space elf with a chainsword and a bad attitude? 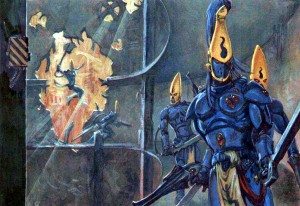 Eldar Storm Guardians can play a variety of roles in your lists. They provide a very inexpensive solution to a Troops tax, while serving to capture Objectives, provide additional Warp Charges, launch counter-assaults, and even fill holes in your anti-vehicle capabilities. Storm Guardians shine in formats which favor Multiple Small Unit strategies, particularly progressive scoring situations.

The usefulness of the humble Storm Guardian is overlooked by most players and the reasons for this are clear. On paper, other Troops choices in the Eldar Codex seem to shine in comparison. Guardian Defenders have a 2-shot Shuriken Catapult and can equip a Heavy weapon. Rangers have an extremely good cover save and can kill targets with their Ranger Long Rifle at range.Dire Avengers enjoy the protection of Aspect Armour (4+), are equipped with the longer-ranged Avenger Shuriken Catapult, and have a pivotal 9 leadership. The deadly and fast Windriders speak for themselves.

The Storm Guardian does, however, boast a surprising amount of utility for a reasonable points value. A Storm Guardian is three more points than an Ork, the same as their Guardian Defender cousins, but with the option to take two less models. In squads of eight Storm Guardians, you can maximize efficiencies in lists which call for Combined Arms Detachments or Allied Detachments. Certain formats, such as Highlander, also demand even more specific Troops requirements. In these cases, eight Storm Guardians are a relief at their points level.

Durability can be a huge issue for Guardians of any stripe. Not only do they have a poor save, but they are not likely to benefit from a powerful Psyker’s most useful powers; those are meant for units like Wraithknights and the Seer Council. This weakness can be counteracted with some rudimentary tactics and a Warlock.

With Battle Focus, Fleet, and possibly the Quicken power from the Runes of Battle discipline, a Storm Guardian should never be out of terrain, especially when on the move.

The Primaris power from Runes of Battle called Conceal grants the Psyker (and therefore their unit) Shrouded, giving them a 2+ cover save in ruins. At Warp Charge 1, it is probably worth throwing one or two dice at. Although there is a great deal of Ignores Cover in the game, your opponent probably won’t choose to waste these shots on a unit that will, arguably, kill very little of army. Tau only have so many Markerlights to go around. If the Storm Guardians are sitting on an Objective, your opponent may choose to kill them just the same and give your more deadly units a greater opportunity to do their work. Protect may also be a good option if you find yourself stuck in the open with Bolters bearing down on you, though not great for a unit which starts with such a poor save to begin with.

From a morale perspective, the Storm Guardians actually have a slight leg up on their Ranger and Windrider brethren simply due to their numbers. A properly-buffed Guardian unit in cover can actually have a smaller chance of being routed than either of the other units. Indeed with their additional attacks, they also have a distinct morale advantage when assaulted. You may even wish to boost your minimum units to 9 members just to bump that first set of casualties to 3 for a morale check instead of 2. Still, Leadership 8 is not spectacular. If you’re lucky (or running enough units to even the odds), the Warlock could roll Embolden to grant the unit Fearless.

Of course, the inclusion of HQs and even the Avatar of Khaine can not only mitigate their Morale issues, but also increase their utility. When the models hit the table, however, it’s probably stronger to use those points on truly killy units rather than boosting your Objective-grabbers. If your Farseer happens to get the Runes of Fate power, Will of Asuryan, which provides Fearless to all friendly units within 12″, this could be rather game-changing to a Guardian army.

Storm Guardians can excel in environments which favor MSU. Storm Guardians, unlike Adeptus Astartes MSU armies, aren’t tethered to a Transport for their mobility. They can reach Objectives surprisingly quickly using Fleet and Quicken, but no one is particularly sad when they die because they were less than 75 points to begin with. Although some armies don’t pay for their transports, they’re still a bit of a crutch in Kill Points missions and some Maelstrom style missions. By spending a few more points on a Warlock, with Conceal active, you may even force some opponents to come out of hiding and try to assault you, leaving them out of position and open to your counter-assaults. Clearly, if you have the option, you want to place your Objectives in terrain.

Storm Guardians don’t just excel from a mobility perspective, but while on the move, they can take out light vehicles and small units on their own. With access to two melta weapons per squad and Bladestorm, they can wither both steel and flesh alike.  Also, with a fairly reasonable number of attacks on the charge thanks to their close combat weapon, their assault grenades, and impressive Initiative 5, Storm Guardians can do a lot of damage to small units of other races.  If you’re lucky enough to roll Embolden, you can even tie up things like Walkers and other powerful units which don’t have Hit & Run.

It may be compelling to take Power Weapons in these units, but that would very much defeat the purpose of keeping them inexpensive. It would be better to allow other waves of Troops or mop-up shooting take care of whatever your Storm Guardians couldn’t finish.

Of course, the  Craftworld Warhost and Guardian Stormhost can boost the Storm Guardians’ mobility and killing power even further. This combination grants them a full 6″ run and a selection of free Special Weapons and Power Swords. If you’re planning on using Storm Guardians in your army then you may want to consider this setup, even if that means losing Objective Secured. There’s also something to be said for mixing them with a CAD for some Guardian Defender deckchairs in the backfield.

The buffs we have discussed thus far are very good, but all of the Warlock’s powers have debuff counterparts which can not only even the odds for your Storm Guardians themselves, but for the other units in your army. Protect is far more impressive in its debuff form, Jinx, ripping away -1 armor save from the enemy unit. Horrify is really impressive in conjunction with forced morale checks.  The opposite of Conceal is Reveal, which strips away Stealth and Shrouded. This can be an enormous boon against some armies. Since Storm Guardians work best at close range, the Warlocks which reach the middle of the battlefield will likely be in range with their powers and able to support your key units. This is not necessarily so for Guardian Defenders.

The sweet spot for this unit seems to be a squad of eight actual Storm Guardians wielding a pair of Fusion Guns and a Warlock. Their Initiative and number of attacks in combat makes the use of Flamers in shooting slightly sub-par in comparison to the Meltaguns. However, if you find yourself facing a lot of lightly-armored foes, it may be fun to see the look of surprise on their faces as the Storm Guardians move up to 12″ and lay down two flamer templates. The Warlock not only provides some great buffs and debuffs, but also brings the unit’s initial number up to 9 which is a morale sweet spot.

This unit totals under 130 points in a CAD (under 110 in a Stormhost) depending on how you kit out the Warlock. It’ll never kill vehicles like a unit of Fire Dragons. It’ll never murder in combat like a unit of Striking Scorpions. It won’t demoralize your opponent with buckets of firepower like Windrider Jetbikes. What it will do is provide an experienced and savvy player with a relatively durable and useful unit which can serve in several roles.

With all of this in mind, it can be argued that Storm Guardians are a superior choice to Guardian Defenders or even other, more expensive units, in certain formats. If you want units who can get close, do some work, and score Objectives before dying, Storm Guardians are not a bad choice. There truly is no bad unit in the Eldar Codex as long as you know when to take them and know how to use them.