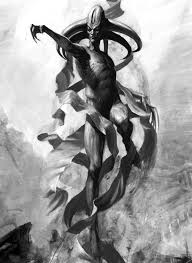 Welcome back to another Necron Codex review brought to you by the one true sweetheart of 40k – Goatboy.  Today I want to chatter on about one of the named C’Tans – the Deceiver.  This guy is the trickster of the C’Tan and has been know to Lie, Cheat, and Steal his way into your heart and maybe victory.  As usual if you want to read up on more tactics check out Frontline’s Tactic’s Corner.

The Deceiver was always the more interesting of the C’Tan Shards/Gods/etc.  He almost felt like a Chaos god with his desire to trick his way into a winning situation.  He was the God that offered up the secrets of Biotransference to the Necrontyr.  Just like the other C’Tan, this is a Monstrous Creature with some extra rules thrown onto it and adding the powers of the C’Tan.  He is cheaper then a Transcendent C’Tan but loses out on a Toughness point as well as losing a wound as well.

In a lot of ways this is just a named C’Tan with some extra rules thrown in.  He has some abilities that can be useful with his redeployment option as well as “leadership” changing effects.  I still feel he is too expensive to see the table top and while he does have some neat abilities he does not offer a ton of benefits to fit in the normal Necron armies you see. 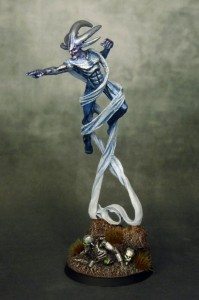 The Deceiver has the same special rules that an MC gets – Fear, Hammer of Wrath, Smash, Relentless and Move through Cover.  He also gets Hit and Run, Eternal Warrior and Fearless.  He has the rule Immune to Natural Law which lets him move over just about anything with the only limitation being he can’t stop on top of impassible terrain or other units.  He has another ability called the Grand Illusion which allows him and d3 other units within 12 inches of him to get picked up and get redeployed or placed into reserves. This is probably his best ability as it allows you to play deployment tricks on your opponent, especially if you go first. You can fake your enemy out by deploying important units in the open, but then redeploying them or placing them in reserves, leaving enemy units in a bad position. He also causes Dread which causes enemy units to have a -2 to their leadership value within 12″ of him. This can be very useful for making enemy units run away or to be come more susceptible to leadership based attacks such as Tank Shocks.

Again the issue with the Deceiver is that he doesn’t add a lot to the normal Necron armies you see.  His redeployment ability is neat but most of the time the army starts on the table, moves forward, and hopes to survive anything the opponent throws at them.  If he had Reanimation Protocols or some other form of protection he could be of use but right now I just see him eating a ton of Missiles (Tau), getting Grav’d to death, or just Powerfisted by a Thunder Wolf Jerkhole. He just isn’t that durable when compared to everything else in the Necron army. He does provide some melee ability, but the question you have to ask yourself is: is it better than the same amount of points spent on Canoptek Wraiths, Lychguard or Triarch Praetorians?

I wish they were cheaper and had more interesting rules as I feel they are a really fluffy part of the Necron army. He does work out interestingly enough with the Conclave of the Burning One as he gets tougher – has some extra wounds thrown in with the Crypteks and could see some use.  Still this guys feels like he costs 75 points to much to do the job you want him to do – be a pain in the butt for your opponent to deal with.

You can take him as an Auxiliary in the Decurion Detachment though, which does unlock that powerful Necron play-style relatively cheaply.

2 Responses to “Necron Review: Elites: C’Tan Shard of the Deceiver”