Clover362 here to give you the review of the Eldar big boy, the Wraithknight.  Eldar players love him, Eldar opponents fear him, and everyone in 40k seems to have an opinion on him!

Whether or not you think the Wraithknight is under costed or bad for 40k, you need to be prepared to deal with them as you will see Wraithknights at almost every single tournament you enter.   For more reviews and tactics articles make sure to check out Frontline Gaming’s Tactics Corner.

While the Wraithknight itself was controversial at the time of the Eldar Codex release, going from a monstrous creature to gargantuan and gaining access to the D for almost no point increase, by now there should be no controversy that the Wraithknight is one of the best units in the game. 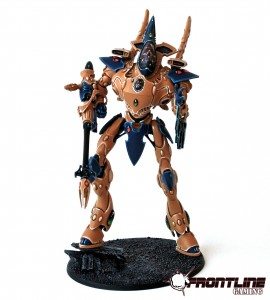 You Think You’re So Tough!

So what makes the giant of the Eldar Wraith-Constructs so good?  His stats, rules, and price of course.  The Wraithknight is BS/WS 4, S10, T8, W6, A4, I5, LD 10 with a 3+ save.  He is a Jump Gargantuan creature giving him all of those special rules as well and as will be detailed below. He gets either ranged or close combat D.  So this costs like 400+ points right?  Wrong!  You get all of that for a base cost of 295 pts. Nasty good!

The Wraithknight comes stock with two heavy wraithcannons (36″ Assault 1, D weapon).  You can sub out the Heavy Wraithcannons for a Ghostglaive and Scattershield (Close combat D weapon and 5++ that causes blind tests for enemies within 6″ when you successfully make one or more saves) or for a Scattershield and a Suncannon (48″ S6 AP21 Heavy 3 blast) for free.  For options you can purchase up to 2 of either Scatter Lasers (15 pts each),  Shuriken Cannons (15pts each), or Starcannons (20 pts each).

Personally, I prefer the shooting D version with at least 1 scatter laser (so you can take advantage of the Gargantuan creature rules that let you shoot your D weapons at a unit other than that you might want to charge).  This version clocks in at 310 points and will absolutely murder all vehicles and still hold up in close combat against everything but D weapons (though high initiative and S10 gives him a chance against imperial knights).  The close combat version is also decent for bombing up the field and wrecking face with some close combat D, plus the 5++ helps a ton to keep them survivable in a world of ignores cover grav weapons.

Ancient Doom- This gives your Wraithknight hatred against Slaanesh with none of the normal down side as he is fearless.  Nice but doesn’t come into play all that often.

Gargantuan Creature-  Because the Wraitknight is a Gargantuan Creature he gains the following special rules: he can fire all his weapons at different targets (under ITC FAQ), Feel No Pain, Relentless, Fear, Fearless, Hammer of Wrath, Move Through Cover, Stomp, Smash, Strikedown, and Unstoppable.

Whew, that’s a lot of Special Rules to remember.  The important one to remember are Unstoppable which makes Instant death wounds only do d3 wounds as opposed to removing him from play and poison and snipers only wound him on 6+.  Feel no pain gives him a 5+ roll to ignore wounds that aren’t caused by d weapons or that have the Instant Death Special rule.  Stomp which makes him even more devastating in close combat,  and Fearless so he will never break or be run down. 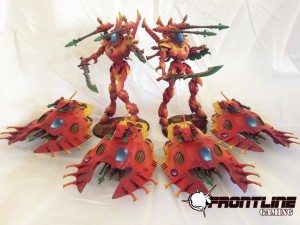 Wraith-Constructs –  This isn’t an actual formation but an auxiliary choice in the Eldar War Host detachment. It can be composed of a single Wraithknight.  It doesn’t give you any special rules but as an auxiliary formation for an Eldar War Host detachment, it fulfills the requirement for that detachment to be fielded in addition to Core formation.  What’s important to know is if taken as part of a War Host Detachment the Wraithknight will always run 6″.  Also in tournaments that don’t limit the number of Lords of War you can have in your army, expect this formation to be used to add multiple Wraithknights to lists.

Wraithhost- The Wraithhost formation requires a Wraithknight along with 3 units of Wraithguard or Wraithblades, a Wraithlord and a Spiritseer.  This is an expensive formation but one you’ll see if you have any Iyanden fluff players in your area or if someone just thinks these models are cool.  If taken as a part of this formation the Wraithknight gains the Battle Focus rule and can re-roll To Hit rolls while within 18″ of the Spiritseer.  That is really good.  In this formation the Wraithknight can be set up for a turn 2 charge without sacrificing any shooting turn 1.  Re-rolling your shooting and close combat attacks while within 18″ of the Spiritseer makes his shooting more powerful and close combat murder. 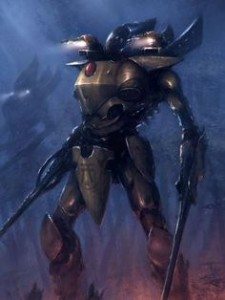 So how do you play with this bad mother and how do you defeat him?  Playing with a Wraithknight is pretty simple and straight forward.  If you have gone with the shooting D version,  stick him in your deployment zone (preferably in cover) and rain Ranged D death on your opponents.  If and when your opponent get’s close you can charge pretty much anything in the game and feel like you have a decent chance to kill it or tie it up for a few turns with 5 S10 ap2 attacks on the charge and d3 Stomps.  The Wraithknight will go down to close combat D (that will get to strike) or buffed up close combat units if your stomp rolls and FnP roles are bad,  but against most other things you should at least give as good as you get.  Also, don’t forget this guy can jump on a midfield objective for you late in the game and likely survive a turn or two in the open.

If you are running the Close combat version, just point him and go.  He will wreck most units with five I5, D attacks on the charge and a 5++ and feel no pain roll on a T8 model makes him pretty durable.  He will still go down to the D of anything that can mass hits that ignore his high toughness (like Bladestorm, Grav or scarabs, etc.).