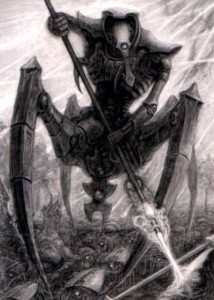 Illuminor Szearas searches for the path to realize his true potential and become a god amongst the Necron and their C’Tan overlords! He has discovered the first part of biotransferance and unlocks it for your army. Let’s take a look at this illuminating character and in the Necron codex! Then check out the tactics corner for more information!

This character is perhaps one of my favorite models in the Necron range! Very unique with his Triarch Stalker type legs, Illuminor Szeras just looks super cool to me. His previous edition was a bit lackluster overall but this rendition really has some great tools that can aide your army, especially if you do not want to go the Decurion Detachment route. 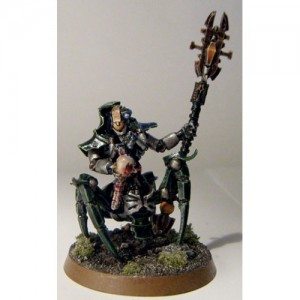 Illuminor Szeras is a great support character for your Necron force, especially if you don’t want to run the Decurion Detachement to retain the objective secured command benefit for your troops. He can also be a fairly cheap HQ choice to unlock that CAD or allied contingent for more support units.

Illuminor Szeras has some great gear and rules that make him stand out as an excellent support character. He’s an independent character and has Reanimation Protocols, but also has fear. This could be a great feature that could save his unit from being torn apart in close combat, a place you do not want him to be.

He also has a special rule called Mechanical Augmentation that allows you to choose one unit of Necron Warriors or Necron Immortals before the game and roll on a chart. They might get extra toughness, extra ballistic skill, or extra strength. This can turn a block of 20 Warriors into a very menacing force right quick.

The big use of Illuminor Szeras is his Lord of Technomancy rule, which gives any friendly models within 6” of him +1 to their Reanimation Protocols. More on this later in the tactics section.

Last but certainly not least is his weapon, a 36” Stregth 8 AP2 Lance that can put the hurt on a lot of different things. This hearkens back to the old Eldritch Lance that Crypteks used to be able to get by the bucket load. Ah, those were the days!

Illuminor Szeras is pretty straightforward. Park him somewhere that will give you the best benefit of his 6” +1 Reanimation Protocol aura, perhaps in the unit that he buffed at the beginning of the game, march forward, and prosper! Use Szeras to try to snipe out light vehicles and put extra wounds on pesky high toughness targets.

Probably the best place to put Szeras is in a Ghost Ark. The size of the vehicle make his aura increase dramatically and can enhance many more units. The durability of the Ark should keep Szeras safe overall and you can put a large block of 20 (hopefully now at toughness 5 or ballistic skill 5) marching forward in front of the aura Ark. Again, use Szeras and a group of Warriors in the Ark to snipe out trouble as it moves forward, buffing and healing units along the way.

Szeras is a very cool character with an excellent sculpt, interesting backstory, and cool special rules. You can use him well to buff your units and create a real problem for your enemy. If running the Decurion isn’t your style, you might consider using him as one of your HQ’s to give your Necron army that Decurion Detachment like feel.

As always, here at Frontline Gaming we sell Games Workshop product at up to 25% off!