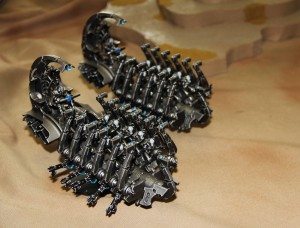 What is this floating crypt the pulls souls from the ground and adds them to the enemy forces? Tremble in fear true believer at the unhinged terror that is known as the Ghost Ark! What more tactics suggestions? Check out the tactics page for more information!

This super durable transport is more than just a troops carrier in the Necron force, it is a healer of your valuable troops choices, buff when combined with certain HQ aspects, and has a very decent amount of firepower to dish out to the enemy forces. The Ghost Ark is this and more in the Necron force. 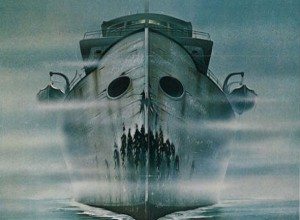 The Ghost Ark is a fantastic entry in the Necron army, and if keeping your troops alive is key to your strategy, then this Machine will certainly be a part of that. It is a transport, being able to hold up to 10 models. It is also a healer, being able to add D3 models back to a unit of Necron Warriors, capable of bringing them back up to full strength. It also has an impressive amount of firepower, both in its Gauss Flayer Arrays on both sides and from the models within. Although it is slow, as a skimmer it can move over terrain with general ease and push up the battlefield with your forces.

The weapons that the Ghost Ark is equipped are two Gauss Flayer Arrays. This is a set of 5 of the basic Warrior weapon, but are located on each side and gives the Ghost Ark the ability to fire at two different targets (Give ’em a broadside! -Reecius), one on each side. Combine that with the troops inside and you have the ability to fire upon three different targets a turn. With that Gauss rule, this gives them the chance to really put the hurt on a lot of different armies and almost any target.

One of the other great features about the Ghost Ark is the special wargear, Quantum Shielding. This improves the armor of the vehicle by 2 until the first penetrating hit. AV 13 is a great platform as it takes out a lot of the massed strength 6 shooting out there, rendering it useless.

Next up is the special rule, Living Metal that most all Necron vehicles come with. This rule ignores Crew Shaken and adds to the resiliency of this unit. If taken in the Decurion Detachment, then you will also ignore Crew Stunned as well.

Last but not least is the Repair Barge rule that allows you to repair your Necron Warrior troops that you field. A Warrior unit within 6” can have D3 models returned to it that have been destroyed. All of these things combined make the Ghost Ark a great unit to add to your army.

The Ghost Ark is also a very resilient unit. It can gain back hull points and starts out with an astonishing 4 making it very difficult to bring down. Coupled with the 13 armor and you have a unit that can be a very big thorn in the enemies’ side. It is also a skimmer so it can Jink against enemy fire as well.

One great tactic you can use the Ghost Ark for is to screen your forces, granting them cover. Your Ghost Arks can push out in front and screen your forces as they move forward and unleash their firepower onto the enemy. The Ghost Ark is very long so a quick turn to the side at the right moment can clear up the view of your Warriors moving up into range. This can also protect your forces from assault as this can be a big downfall of your Necron army.

Another great combo with the Ghost Ark is with the character Illuminor Szeras. Szeras is a Cryptek that affects models Reanimation Protocols within 6”. Since aura powers go out from the sides of the vehicles this creates a very large footprint from the Ghost Ark that can impact many units at once. I’d keep Szeras with a unit because if your Ghost Ark dies then Szeras will be out in the open by himself.

The biggest thing that your Ghost Ark will fear is any kind of deep striking melta squads. Melta will make short work of your transport and right quick. Screen it with bodies and don’t let anyone near if capapble. Another thing to think about is that your rear armor is still 11, as Quantum Shielding only affects the front and sides. It’s a small arc, but things that get into the rear of the Ark will put it down much quicker.

Dangerous terrain can be an issue as the large vehicle can quite easily find itself unable to clear a terrain piece without hitting it, but if you are playing this vehicle in a Decurion Detachment (duh!) then it will gain Move Through Cover as a result of the various formation benefits.

So there you have it! Your Ghost Ark is a swiss army tool of living metal goodness that can really buff your foot troops and has some decent firepower as well that can impact any unit with the Gauss rule. They may be a pain to assemble, but they are pretty great and can add a lot to your forces overall.

← Eldar Review: Troops: Rangers
You Are Not A Special 40k Flower →