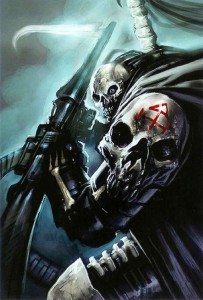 Blue Oyster Cult was full of it, you should fear the reaper!  Howdy fellow gamers, Mr.MoreTanks back with an article on the most cryptic Phoenix Lord with shoulder pads that would make an Astartes jealous.  Maugan Ra, the Harvester of Souls, with his trusty Maugetar are ready to scythe down the enemies of Khaine.  Be sure to check out Frontline Gaming Tactics Corner for more great info that will take your generalship to the next level.

With a big stat line that would make nearly any character jealous, Ra rolls up ready to fight.  A Weapon Skill, Ballistic Skill, and Initiative of 7; Strength, Toughness, and 4 Attacks; combined with a 2+ Armor Save and 3 Wounds rounded out with a Leadership of 10 make up an impressive state line.  Add that to his list of Special Rules so long its borderline laughable, and you get yourself a Phoenix Lord.  Seriously, look at all those Special Rules, that list goes on for days!  His Warlord Trait, Mark of the Incomparable Hunter, gives Maugan Ra Split Fire which will go well when he’s stuck into a Dark Reaper unit. 195 points, despite being on the lower end of the Phoenix Lords, is still a pretty steep investment for any single character.  In the teeth of the article, we’ll look more in depth at what place Ra can have within your Craftworld’s force. 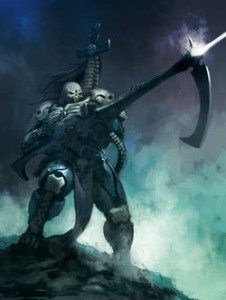 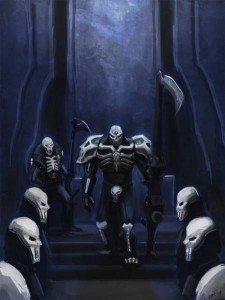 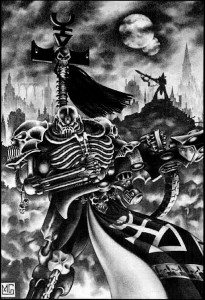 So how do we make the most of our Harvester of Souls?  Well, that’s somewhat tricky.  He clearly needs to go with something, but what?  The biggest issue in deciding what to do with Ra is that his weapon doesn’t really match with any units’ weapons that he would pair well with.  To be honest, I think there is a respectable argument to sticking him in an assault unit.  Sticking him into an assault unit is an issue though, because he doesn’t come with Assault Grenades as well as his lack of speed.  There are some upsides to him though in an assault unit,  he can tank wounds with his +2 save as well as his Eternal Warrior, plus he can Overwatch twice in the ITC format thanks to the wording of the Whirlwind of Death Special Rule.  Combine that with his impressive stats and the boost in killing power you get in close combat from the Maugetar, and stopping to think about sticking him in an assault unit doesn’t suddenly seem so absurd.

So while there is an option for sticking him into an assault unit, we all know that the real option is to put him into a shooty unit.  Now, as to which unit that is, that’s the real struggle.  One might think to throw him into a unit of Dark Reapers, and while that’s not an immediately poor choice, I’m not so sure that’s the only option.  It does certainly seem like the most basic and obvious though.  The Maugetar doesn’t necessarily pair exactly well with Reaper Launchers carried by the Dark Reapers.  But, the amount of firepower that Ra can dish out can make up for the lack of low AP that the Maugetar has.  Besides, Eldar really aren’t lacking for low AP weapons anyways. 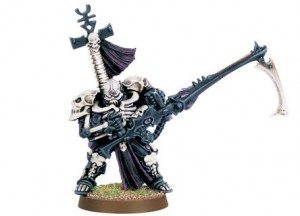 Dropping him in with a unit of D-scythed armed Wraithguard with a Dark Eldar Archon that’s carrying a Webway Portal is a good option.  The strength of that option here comes from the ability of Ra to tank returning firepower, additionally, Split Fire can be a very useful tool for either him to tag a vulnerable unit on an Objective, or lets you lay another D weapon in the form of an Ignore Cover template onto another nearby target.  This option actually has great appeal to me, though its pretty damn expensive to put this unit together and Grav will wax it pretty quick.

You can also take him in the Eldar War Host detachment in the Living Legends slot, which gives him Matchless Agility, granting an automatic 6″ run! Really great for using him to Battle Focus around the table, shooting people’s faces off.

Honestly though, Ra is really not the most optimal HQ choice in the book.  Most of the Phoenix Lords are somewhat lackluster, but you can certainly find a place for them in your army, and fulfill a unique place within your force.  Ra seems far more flexible than really any of the other Phoenix Lords, which is both a boon and a burden.  Though he wants to be a shooting character, the lack of meaningful AP on his gun is a concern.  By and large, the price tag and somewhat lack of synergy with any other meaningful shooting unit will likely make you want to consider Maugan Ra.  There are some neat tricks you may be able to pull off with Ra, but be wary of putting too many points into one basket, otherwise the Harvester may be more of a threat to you than your opponent.  Still, he’s got a pretty cool title though.