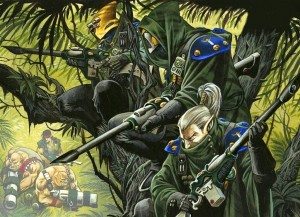 When Eldar Rangers are being interviewed and are asked what they feel when they shoot a Mon-keigh, they simply responded: “recoil.”  These cold, heartless killers can stalk like a Striking Scorpion and sting like a… a… a bee or wasp or something.  Take a look at the Tactics Corner for more bad jokes and great strategies and tactics.

Well, these guys sure are a thing, huh?  A potentially Objective Secured unit that can be dug in and hard to remove, Rangers’ Special Rules combined with their typical low target priority status for the enemy actually makes them a useful tool for an Eldar player.  60 points will bring you 5 Rangers with the potential to add up to 5 more Rangers at 12 points a pop.  Their stats are nothing to write home about, but we have the ones we really care about.  Ballistic Skill 4 is the main concern.  Leadership 8 is useful too, the rest of the stats are pretty much the standard for Eldar.  Fragile, but reliable.  We’ll be using these Rangers though to play a roll that will allow the rest of our Eldar army to focus on doing what it does best, shooting and maneuvering around the board. 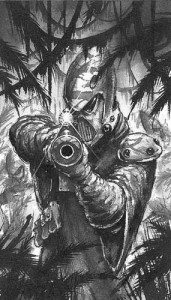 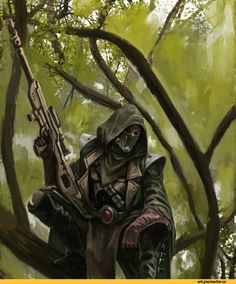 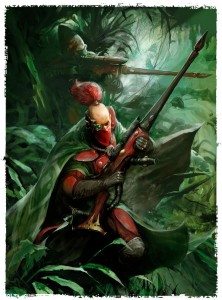 So here’s where we get to what we will be using our Rangers for, hiding.  Yup, we will be using these guys to tuck them into an out of the way and hard to get to Objective in cover, preferably a ruin so we can score a 2+ Cover Save.  Out of sight is out of mind, and by putting pressure onto the enemy with your Wraithknight and Eldar Jetbikes will make the Rangers even less of a target priority.  Hiding these Shrouded guys in cover also means that they’ll require enough attention to kill that they won’t be an easy Malestorm kill or standard kill point in the ITC.  This lets your Rangers score Malestorm points during the game.

Infiltrate gives us the option of starting them on the board as well, where we can prevent Battle Companies or Bikes from Scouting up and blasting our Wraithknights or Jetbikes with Grav.  This is very much a sacrificial roll for the Rangers, but its a very handy option that can be the difference between life and death for your Wraithknight.  Outflanking is an option, but with all of the speed and mobility present in the rest of your army, you really won’t be needing this deployment choice.

I’d also be remiss if I didn’t mention the Ranger Long Rifle, wounding on a 4+ is somewhat nice, but between the plethora of Scatter Lasers and D Weapons, you really don’t need to need to care about the firepower these guys are rocking, or not really rocking.  I’m not going to beat around the bush that the Rangers are hiding behind, I’m just going to come right out and say it, Rangers’ guns suck.  They just are borderline useless.  Sniper rifles in general are just not good.  Anything we may have tried to use them for can be done better by basically anything else worth bringing in the Eldar codex.

60 points in the grand scheme to things isn’t an unreasonable cost for Rangers considering how they can be used to supplement the scoring ability of your army while reducing the deployment options for your opponents.  The Eldar have enough killing power that investing in these guys isn’t a waste of points.  Just don’t expect them to be doing any major killing, keeping up with the guns of your other Troop choices (Jetbikes with Scatter Lasers, c’mon, you know that’s what they’re going to be) is not an option.  Now don’t be alarmed, but if your opponent really wants these guys dead, and has a drop pod with flamers in it, they will be, and this unit, and others like it really aren’t all that uncommon.  Your Rangers will be working when they’ll be low on the enemy’s priority list, something that isn’t all that difficult to accomplish when you’re shoving a bunch of Eldar down their throat.

Rangers are easy to gloss over and forget, and too be totally honest, the Eldar don’t really need them to succeed.  They can be a useful tool though when used correctly to boost the strength of your Eldar, just use them conservatively and let the rest of your army do the real work.  Thanks for reading fellow nerds, may the dice be ever in your favor.