You would expect an ancient civilization with the most advanced technology to have weapons that absolutely liquefies whatever they shoot at.  Today, I’ll be reviewing a unit that carries this type of weapon into the battle, Necron Deathmarks.  For other unit reviews and tactics articles make sure to check out Fronlinegaming’s Tactics Corner. 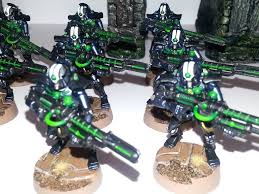 Deathmarks, like the name suggest, are designed to pick a unit anywhere on the board and kill that unit.  Also with some cool special rules the can also give you a form of interceptor which Necrons can’t usually access.  So let’s take a closer look at these ancient robotic snipers.

A unit of five Deathmarks  carry the basic Necron Immortals stat line plus an additional 5 points. Those 5 points buys you Deep Strike and some special rules.  5 points for Deep Strike and “baby interceptor?” Yes, please.  You can take up to ten which is something to consider as you will want to make sure you maximize the damage this unit does when it lands.  So for 180 points you will get a unit of 10 that can dish out a respectable amount of wounds and will need to be dealt with, not bad.

Deathmarks come with: Synaptic Disintegrators.  Synaptic Disintegrators are the Necron sniper rifle.  The have a range of 24” SX, rapid fire, ap 5, and the sniper special rule.  Potentially 20 BS 4 shots that can be precision shots and ap 2 is nothing to sneeze at.  More importantly this gun is designed to have synergy with Deathmarks’ special rules.

Reanimation protocols are well known and awesome. You can also take Deathmarks as a single unit auxiliary formation to a Decurion Detachment to take their resiliency up a notch.

Deep Strike allows you to drop this unit wherever you need it to pump out wounds against any high toughness non Gargantuan Creatures, like Wraithguard, bikes, and artillery.

Hunters from Hyper space is where these guys go from a harassing, annoying unit to putting out some pain.  Hunters from Hyperspace makes all shooting attacks from the Deathmarks wound on a 2+ during the player turn the unit arrives from Deep Strike reserve.  That is nuts.  By the numbers a unit of 10 will do about twelve wounds to any non-gargantuan creature infantry model (two of which on average will be ap2).  For reference that will take out a combat squad from the Skyhammer Annihilation Force in a single volley.

Ethereal Interception is basically “interceptor light.”  If your Deathmarks are in Deep Strike Reserve,  you can choose to immediately after any enemy unit arrives from Deep Strike Reserve using the rules for deep strike and fire at the end of the enemy movement phase at any unit that arrived from reserve that turn.  While not quite interceptor this allows you to soften the blow of anything that plans to drop in and alpha strike you. Very cool when playing against units that deep strike! 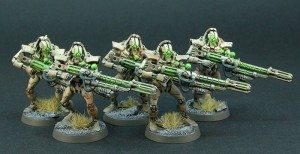 Deathmarks are really straight forward to play with their Wargear and special rules.  Put the unit into deep strike reserve and pick a target to drop a bunch of wounds on when you drop in. Another option is to simply drop them into your opponent’s backfield.  The Deathmarks should make short work of any backfield objective sitters and  now you opponent has to dedicate resources to killing the Deathmarks as your other units get closer.  If your  opponent chooses to ignore the Deathmarks, they will just continue to cause wounds to anything around it.  Those are the type of choices I like to make my opponents make.   If you are up against a drop pod army or War Convocation, put the unit into Deep Strike reserve and drop them in to intercept and blunt what ever bit of nastiness that is coming at you.  Your Deathmarks won’t delete whatever you point at, but they will cause damage and can disrupt your opponent’s plans. Overall, I would say Deathmarks are not a must take unit or a never take unit.  Deatmarks are just a solid choice from a solid codex for anyone wanting to add some individual spice to their Necron list.