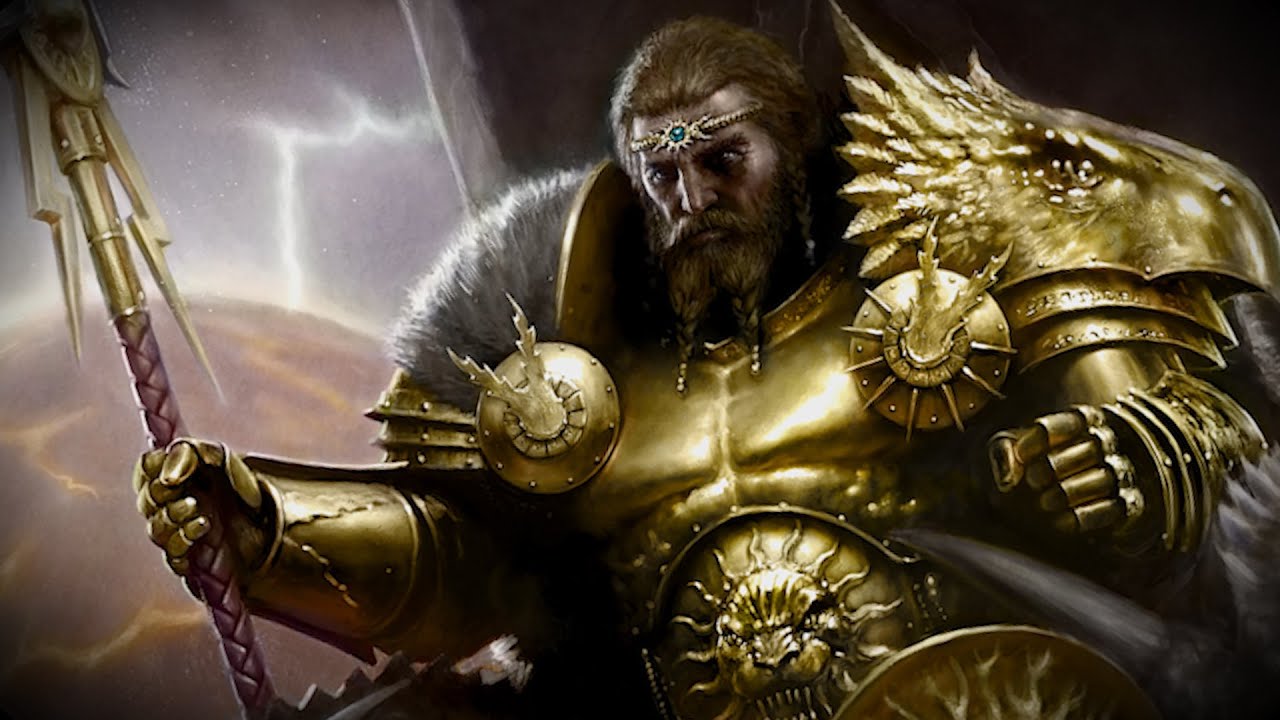 When Sigmar was tricked into losing Ghal-Maraz, he fell into despair and closed the gates of Azyrheim, believing he failed the mortal realms. After much thought, he came to realize that in order to defeat Chaos, he had to drop the mantle of God-Warrior, but instead become the God-King. Over the centuries, he snatched up mortals that still defied against the Dark Gods, even though they were born knowing only them. Through his divine magics and the help of Grungni, he forged a near-immortal army that stood a chance against the daemons and corruption. Thus, the Stormcast Eternals were born, justice and vengeance incarnate!

Hey everyone! Anvil here, and today, we’ll go over an overview of the strengths and weaknesses of the Stormcast Eternals faction and the units that come in the starter box, since those models are the most common for players to use. in later weeks, we will go over all of the other units that were released post-starter box, and the Battalion Warscrolls. For Sigmar!

Stormcast Eternals, aka “Ground Marines”, “Sigmarines”, etc, are the first faction that was released when Age of Sigmar came out. Heavily armored and tough, they are an elite army where even their most basic troops that can stand toe-to-toe with the most monstrous of units. All models (except for the Gryph-hound) has at least an Armor Save of 4+ and 2 Wounds, and some of them have Sigmarite Shields, allowing you to reroll 1s on Saving throws. Well balanced in all of the Combat Roles (Tank, Support, Striker, Flanking, and Tech) and having some nifty rules for being summoned, they are a great addition to any army of Order, or even Destruction. 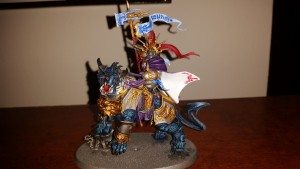 The first Hero for most SE players, he is a solid model for a starting army. Having a 3+ Save with 7 Wounds is already pretty good, but being able to move 10″ is what makes him solid. His Command Ability allows for all Stormcast Eternal units within a whopping 24″ automatically pass Battleshock tests. His Tempestus Hammer is strong and reliable to attack with, especially on the charge, and the Dracoth’s Claws and Fangs can deal a lot of Damage on some lucky dice rolls. Besides just his Lord of the Host Command Ability, he can also support your other units in combat with his Storm Breath, staying behind your lines and plinking off enemy models and reducing number of attacks they would normally be taking. When you combine all of these attributes together, the best way to use them is to place him around the middle of your army, slightly behind your lines. Doing so will make sure that it’s difficult for the enemy to reach him, he can target one of multiple combats with his Storm Breath, almost everyone become immune to the Battleshock tests, and if a unit really needs help right away in combat, he has the speed to get there quickly. He is at his strongest when you charge with him for the extra D3 attacks with the hammer, and don’t forget that because the Storm Breath is an ability, and not a ranged weapon, he can still fire it off even if he ran that turn. Very flexible, very solid, all around good choice, even if he’s not your general. 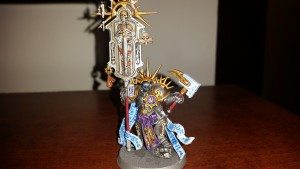 The Lord-Relictor is a personal favorite of mine, mostly because he is what I wish Chaplains would be in 40k. He is alright as far as his stats go, but is a bit slow and just okay in combat. But his real strength lies in providing a lot of support for one unit through his prayers: Lightning Storm and Healing Storm. They’re pretty reliable to get off on a roll of 3+, and can swing combat in your favor very quickly. Lightning Storm is great for those D3 mortal wounds, but the real beauty of it is the -1 To Hit rolls debuff that he applies to that unit. It makes Monsters and Heroes less scary in combat, and lesser units will struggle to even get a wound on your models. In the late game, where he’s by himself and trying to stay alive, I’ve often used it in the Hero phase, and then performed a Run in the movement, slowly chipping away at them to increase my odds of winning when the inevitable melee combat occurs. Healing Storm is straightforward: heal D3 wounds on a Stormcast Eternal model (note that it’s not a Unit, only one model). Great for keeping your other Heroes, like the Lord-Celestant above, in the thick of fighting. But because of his slow speed, he is often paired up with your Paladins: Retributors, Protectors, and Decimators. They will often be outnumbered, and because they each have 3 Wounds instead of 2, you’ll get a lot of benefit from both prayers. Also, it cannot be overstated that another strength of his is having the Priest keyword. That is important because there’s a number of Terrain, Realms, and Battleplans that give lots of special rules if there’s a Priest nearby (like the Realmgate). One of the MVPs of Sigmar, indeed! 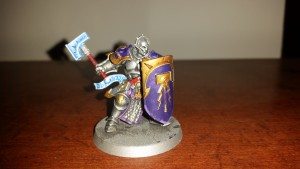 The bread-and-butter of the Stormcast Eternals, they will often make up most of your army, considering that this faction is Elite in nature, and will benefit from having a more defensive force in general. They’re slightly faster than Paladins, and even though they have 1 less wound than their big brothers, their Sigmarite Shields actually make them more durable, making them excellent Tanks. They have the option of dropping the shield to dual-wield weapons, which give you another option when adding on to your army and you plan on making your force more offensive. They’re surprisingly good when faced against other elite units, Heroes, and Monsters with their Lay Low the Tyrant, adding +1 to their To Hit rolls against models with 5+ Wounds characteristic. When dual-wielding, they reroll 1s to hit, making them really reliable against the mentioned units. They also have access to Grandhammers and Grandblades for every 5 models in the unit, giving them a little extra “oomph” in combat. As far as whether to go with hammers or swords, it’s up to you, but statistically, it’s better to go with hammers. The reason I say that is because it’s much easier to get bonuses for To Hit rolls vs To Wound rolls, meaning that their’s a point where you’re auto-hitting with the swords, but still having a 50% to wound as well, while with the hammers, it’s common for me to be rolling 2+ hit, 3+ wound from those buffs, and even better when dual-wielding. Personally, I would keep the unit at their minimum of 5 models, with the Liberator-Prime equipped with the Grandhammer or Grandblade to take advantage of his 3 attacks. 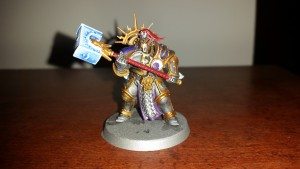 Retributors are to Liberators as Terminators are to regular Marines. They have 1 more Wound than their “lesser” counterparts, and 1 more Bravery, but they are also 1″ slower, making them rely on Running and staying behind your other units. They’re very reliable at dealing damage with their devastating Lightning Hammers, and the Starsoul Mace is a nice amount of reliable mortal wounds to inflict. However, the mace does not have an Attack value, so the Retributor-Prime gains no additional benefits with it, so give it to one of the other models. But what scares most opponents is their ability to inflict a lot of mortal wounds. Blast to Ashes makes their attack rolls of 6 or more (and the “or more” is key) to automatically inflict 2 mortal wounds! But the real magic is if you give them +1 on their To Hit rolls; remember that bonuses like that are added AFTER the dice are rolled. So a roll of 5 becomes a 6, and a 6 becomes a 7. The Lord-Celestant on foot has a Command Ability that provides that beautiful buff, and so does a Lord-Relictor on a Dragonfate Dais (if the rolls are in your favor), or even if they’re near terrain with the Damned special rule, and they all stack! Aim for those situations where you can get multiples of those buffs so that you can inflict those mortal wounds on a 4+ or even a 3+ if really lucky, but don’t be a slave to it. Keep the objective in mind. Like other Stormcast Eternal units, best to keep them at minimum squad size. 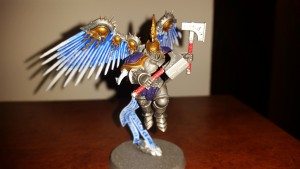 They have the one advantage that the rest of the army sorely lacks: speed. With a profile similar to Liberators, except with 12″ movement and the Fly ability, they can come to the aid of anyone or assassinate lone Wizards if needed. They can either dual-wield hammers or have the hammer/shield combo, and both have their merits. If you sorely need more Tanks, then the Sigmarite Shield is the way to go. But having dual-hammers makes them ideal for aiding your units in combat from a distance (the rerolls for 1s affects both melee AND ranged attacks) or for getting a few hits in before charging. Speaking of which, they are some of the most reliable chargers in the game with their Heralds of Righteousness ability, giving them 3 dice to roll instead of 2 for Charging, for a potential 30″ threat range! If your units are having no problems with the front lines, then they are excellent as harassment, and very good at countering the enemy’s ranged units, like archers or cannons, since they tend to have low armor saves, making them vulnerable to any attack. They can also have the Grandblade or Grandhammer for every 3 models, which I would give to the Prosecutor-Prime. The Grandaxe is a great choice if you need something to counter Hordes, giving you 1 attack for each model within 2″ of the wielder, which given their large model size, is a big deal.

Thanks for reading today’s article, and be sure to check out the Tactics Corner for more great articles! See you all next week for more Stormcast Eternals goodness!