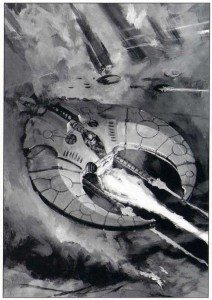 DOOM! DOOM! DOOM! – GO HOME NOW!  Howdy fellow gamers, Mr.MoreTanks back with another article on the Necrons.  This time, we’re looking at that one other flyer you’ve heard might be in the Necron codex.  Well, not only am I here to confirm its existence, but I’m also here to give you some ideas on it.   Be sure to check the Tactics Corner for more great articles!

Overview:  Ah, the Doom Scythe, this flying croissant has more bite to it than… uh, 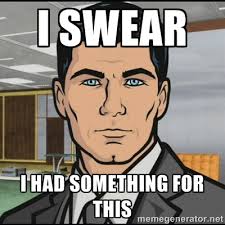 My mother thinks I’m funny.  Any who, the Doom Scythe finds itself in the Heavy Support slots for the Necrons.  At 160pts, its fairly reasonable when comparing the point costs to other fliers in the game.  It’s a little bit costly though, especially considering that while it has 3 Hull Points, the Armor Value on all facings of the bird is simply 11.  This is a pretty big strike against it to be honest, as we all know, the game is getting nastier and deadlier, so surviv-ability is a must.  This becomes an even bigger issue since Jinking basically makes this vehicle all but useless, but more on that later.  It’s still BS 4, so that’s pretty awesome.  The biggest problem though, is that based off it’s weapons, and their ranges, the Doom Scythe isn’t entirely sure what it wants to do. 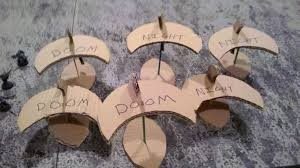 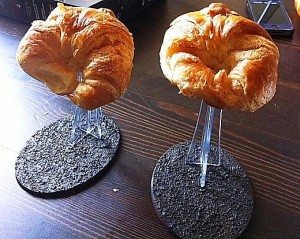 So what is the plan here then with the Doom Scythe?  Well, its stuck playing a ground support game by and large due to the fact that its main gun is a blast weapon.  There’s some good and bad to this. The upside is that Necrons really don’t have that much low AP shooting or blast weaponry, and so the Death Ray can wax units that would normally take a bucket load of dice.  Centurion Devastators, Wraithguard, Thunderwolves, and the like really don’t like getting nailed by a Strength 10 AP 1 Blast.  Now, Necrons can deal with these units of course, but they usually have to drag them down kicking and screaming with dice.  Vehicles and Monstrous Creatures don’t like being hit either, but again, more than anything else the Necrons can handle it, especially Vehicles.

The real problem with the Doom Scythe though is that all you have to do to make it basically useless for a turn is to shoot a scary weapon at it.  The Necron player will have to seriously gamble about whether or not they’re going to Jink.  If the Scythe Jinks, its Snap Firing which makes the Blast gone for your next Shooting Phase.  Plus, Snap Fire takes the teeth out of the Tesla rule, so leaning on your other gun is hardly an option.

The other issue with the Doom Scythe is that all of its weapons are fairly short ranged.  24 inches is pretty short when compared to the weapons on most vehicles.  The fact that they’re on a Flyer though is enough to pretty much make up for it.  I don’t have to tell you how fast and far a Flyer is, or how they can get to nearly anywhere on the board.  I will anyways, Flyers can put their guns nearly anywhere on the board.

That being said, there is an abundance of Interceptor out there, especially with the new Tau.  Having to get close to the enemy to bring your guns to bear means that unfortunately you will be having to also stick your head into the mouth of the bear and hope that it doesn’t bite too hard.  This is where the surprising fragility of the Scythe really becomes an issue.   Hiding out of the range of the enemy’s guns becomes extremely difficult, especially when your weapons are then out of range of anything worthwhile if anything at all.

The Deathbringer Flight Detachment requires 2 – 4 of these birds, and offers some pretty humble buffs to some already somewhat humble units.  Amalgamated Targeting Data Special Rule adds +2 Ballistic Skill to any Doom Scythe from the Detachment that fires at the same unit after the unit has already been shot at by another Flyer from the Detachment.  The Wailing Cacophony also reduces the Leadership by all enemy units by 1 if those units are within 12 inches of 2 or more Scythe’s from this Detachment. You can also take this as a part of the Decurion Detachment as an auxiliary formation, which is another use for it.

This formation is honestly, a little bit mediocre, and doesn’t do anything to curb the concerns of the Doom Scythe.  Some increased Ballistic Skill is nice, but the issue is that you’ll rarely have to hit something with a Strength 10 AP 1 Blast twice, unless that thing would require getting hit by quite a few of these shots.

Overall, the Doom Scythe suffers from bring stuck into a roll that the Necrons don’t really need, in addition to that, it doesn’t take too much to make it essentially useless.  It lacks the durability to make up for its situational uses, when it works though, the Death Ray hits like a truck.  The most important thing to remember with this flyer is that it lacks the traditional toughness of basically almost other Necron.  Use it carefully, like a scalpel, and you may find the right job for it.