The Culexus, Your Psykers, and What’s Love Got To Do With It? 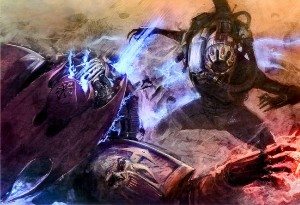 If there is one figure that psykers in the 40k universe fear more than anything else it has to be the Culexus, most terrifying of the Imperial Assassins. This single model can literally shut everything down just by moving close to your models and will then proceed to suck their psychic energy dry and destroy you with it. For a measly Thunderfire plus 40 points you can unlock the best psychic defense in the game and a character that will strike fear into your psychic deathstars heart. He is a terrifying killer for the Imperium!

One of the problems that Culexus players have is he has so many rules to memorize.  He has Fear, Fearless, Infiltrate, Move Through Cover, and Preferred Enemy (Psykers).  He can’t join other characters, has a 4+ Invul save, Ignores Armor saves in close combat, inflicts instant death on a 6, inflicts instant death to psykers, shuts down all psychic powers within 12” and does not allow them to generate warp chargers, can’t be targeted by psychic powers, gives enemies a -2 to look out sir, and has a fantastic psychically charged weapon that is strength 5 and AP1. It also has psi-shock grenades the cause perils on a hit, units don’t get extra attacks when charging this model unless he has gone to ground or is already locked in combat from a previous turn, and all attacks are resolved at BS and WS 1…….just those rules…right there….that is all…move along.

All those rules packed into a tiny frame make this one of the best single models in the game that can completely change the outcome of a battle, even if the enemy doesn’t have any psykers as he can still use his psychic powered weapon in the psychic phase, then shoot and assault another unit later on. 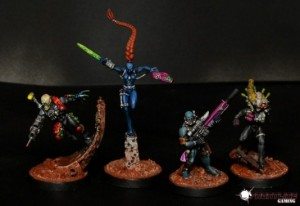 This mighty model is the bane of psychic deathstars like Centstars, Seer Councils, and other psychicically charged and defended units. He can tear through a unit like that in a turn or two easy as I’ve seen from personal experience. There is nothing like seeing your thousand point unit go up in smoke from a unit about the tenth of its cost. Feels a bit unfair! But truth be told I bet some of my opponents would say the same thing when I’m rolling hot in the psychic phase.

The Culexus is also great at tearing into MSU units. Scouts, Marines, Fire Warriors, any small unit that isn’t backed by invuls or high amount of close combat attacks are great for the Culexus to tear into as his attacks ignore their armor saves and they will be hitting back on 6’s in shooting and 5’s in close combat.

Getting The Culexus to Max Damage:

Probably the key I’ve seen in using the Culexus for most damage is making sure you have a means to get them there. This will most likely mean a transport of some kind. Since you will most likely be allying him with Imperium forces, then you will have access to transports like Rhinos, Drop Pods, Chimera’s and even flyers like the Vendetta, which puts his 12” bubble to massive effect as it now comes from the hull.

Drop Pods are perhaps the best means of transport. They are cheap and can be directed to just about any point on the battlefield, making the Culexus super useful and able to pinpoint his destruction on the table.

Don’t forget that he can infiltrate as well, which could be a very useful tool in certain circumstances.

What To Do Against The Culexus:

So if you are running a psychic heavy force, what are you to do? I’ve run up against the Culexus far too many times as of late and I’ve had to think quick and plan ahead to try to make the best of the game. Here are some thought about what you can do if you come up against this potent powerhouse of pleasure.

Null Deploy – For those that don’t know, this is where you leave most if not all of your forces off of the table in order to choose when they come in. Drop Pod players do this a lot and it is a great tactic as you hope the Culexus comes in before your psykers make it to the battlefield and can just avoid where the Culexus comes in at. You will want the bottom of the turn to ensure that you have a better chance of not being shot off the battlefield. I employed this tactic recently against the Mediocre Gamer and it worked in avoiding the Culexus, but didn’t pan out when nothing else came on when I needed it to and I couldn’t get Invisibility off to save my life. Check it out.

Alpha Strike – This is where you try to do enough damage that when the Culexus comes in it is pretty much moot. You take first turn and buff up the star and bring in your heavy hitters to tear through the enemy. I was able to do this recently, barely, in a game against Space Wolf Steve. I was able to take out a lot of his forces and get ahead on the maelstrom, putting him into a reactionary position to try to catch up. This can also be helped if the Culexus fails his roll to come in and his army is left open to your attacks.

Kill It – The Cullexus is hard to hit, but if you do is actually fairly fragile overall. At only toughness 4 and only sporting a 4++, simple bolter fire can take him down. This is wear twin-linking and other reroll rules like Hatred will help out a ton against the Culexus. He has three wounds but it you have a fifty-fifty chance of hurting this model should your attacks stick. Utilize high volume of fire or attacks that has internal rerolls to put a lot of hurt on the Culexus. Or just keep shooting it with everything until it dies.

So there you have it, some things to know, watch out for, and some ideas to utilize against this psychic downer. What about you? What have you found to be effective against this pain in our psychic butts? Post below and be sure to check out the Tactics Corner for more great tacticas!

19 Responses to “The Culexus, Your Psykers, and What’s Love Got To Do With It?”