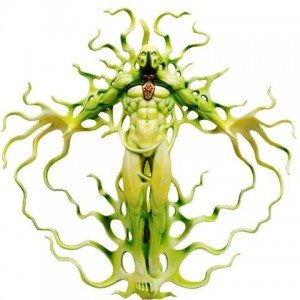 Welcome to another Necron codex review brought to you by the one and only, Goatboy.

Today I want to talk about the model that caused most of the initial Escalation trouble and how GW cut him off at the knees a bit when they updated the Necron codex.  This one time ultimate boogie man of 40k was the Transcendent C’Tan! As usual you can read more tactics at Frontline’s Tactic’s Corner.

I remember when Escalation first hit and the dream/nightmare of using some of the big monsters/vehicles/units caused a lot of community backlash.  It was one thing to have broken normal 40k rules but Gargantuan creatures, super heavy vehicles, and crazy Forge World rules would be the end of the competitive scene as we knew it, according to some.  The biggest culprit seemed to be the initial version of the Transcendent C’Tan and its plethora of rules, abilities, and overall table dominating presence.  Lucky for us – the new rules for this Bad Boy are a heck of a lot tamer and while I think some of its old power should have followed it – I am not sad to see the sheer game brekage of this guy dropped to normal levels.

The Transcendent C’Tan still has his uses as he has a lot of interesting rules to help out the Necron Army.  Sure in this day of new Tau it gets hard to invest in Deep Striking options but it might not be bad to bait out some shooting if you do a complete investment into a shock and awe army list.  The C’Tan is a Monstrous Creature with a serious boost in stats with Strength 8, Toughness 7 and 5 wounds.  It also has a 4+ armor save and Invulnerable save.  I wish it just had the Invulnerable save as it would give it some power against Grav weapons.  It’s still faster then the rest of the Necron army with an Initiative of 4 and 4 base attacks.  Its WS and BS both start at 5 which makes him better then a lot of the other ancient warriors.  There are no upgrades for him and his basic attack is a random d6 with a bunch of different abilities.  I think they should have given you the ability to roll 2d6 and pick one for his point cost but I think the initial backlash on him caused this guy to get nerfed pretty hard.

The Transcendent C’Tan comes with the Necrodermis which grants him a 4+ Invulnerable save and makes every model within d6 inches take a Str 4 Ap 1 hit when he dies.  He also has the powers of the C’Tan which you see below.

He gets the mentioned abilities of a Monstrous Creature (Smash, Move Through Cover, Hammer of Wrath, Fear, and Relentless) as well as Eternal Warrior, Fearless, and Deep Strike.  He also has an ability called Writhing Worldscape which has all enemy units treating open ground within 6″ of the C’tan as difficult terrain.  It also doesn’t follow Natural Law which mean it moves over everything and is only prevented from stopping on top of something it can’t be on (enemy or friendly units, Impassable Terrain, etc.).  If only it could move 12 inches, he’d be a monster! As is, he is pretty slow.

This is hard as this unit is just not fielded much in any Necron army.  Its cost is too high to be worth it most of the time and its random nature for offensive abilities just leaves him on the sidelines in most cases.  I think there could be something fun fielding a few of these as a Deep Striking threats but right now they just don’t put out enough offensive power to be worth it.  I think if they cost the same as say a Dreadnought or something along those lines we could see them but right now there are better things to spend your points on. 3 Canoptek Spyders cost less, give you 3 MC’s, and could give you more offensive punch then one C’Tans in melee, plus make more Canoptek Scarabs which are also, quite good.

I think if they set up some better power mechanic that would let you pick powers or some kind of “make your own” C’Tan, that would have been a lot more interesting then just a random d6 and hope you get what you need.  Plus, the powers do not feel nearly as devastating as say – some of the Tau shooting that not only costs less, but comes attached to a better unit. I made my own personal C’Tan to try and make a big MC army and every time I looked at the rules I just thought – this isn’t worth it.

However, if you do want to use the Transcendant C’Tan, I recommend Deep Striking him in almost all cases unless you find yourself up against an army that will be coming at you, in which case you will want to keep him in your lines for counter assault. When Deep Striking, you want to toss him into the enemy backfield where he can cause maximum disruption. Targeting non-dedicated combat units works great where he can be a big bully and take out support or MSU scoring units. You can take him in a Decurion Detachment in the Star-God auxiliary formaiton which does satisfy the requirement for the Decurion, so that is a possible solid use for him!

You can also explore using him in a Conclave of the Burning One formation from the Mephrit Dynasty in the Shield of Baal Exterminatus book. This is a cool formation that attaches 2 Crypteks to the C’Tan (it can also be used for The Deceiver and The Nighbring C’Tan, also) who give him a 5+ FnP if they’re both alive, a 6+ FnP if one is alive and no save if they both die. The entire unit uses the C’Tan’s Toughness value, and this can be further buffed with the God Shackle relic, which grants the C’Tan +1 Strength and Toughness so long as the Cryptek holding it is alive. Not bad for 10pts! This dramatically increases the C’Tans durability as going up to T8 means many weapons can’t hurt him, and the FnP bonus is–obviously–awesome.

In the end, this is a mid tier unit. It will often die before doing anything useful, but when it has a big game it will be a lot of fun and make a big impact. 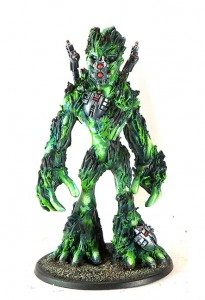 ← Raven Guard
The Culexus, Your Psykers, and What’s Love Got To Do With It? →