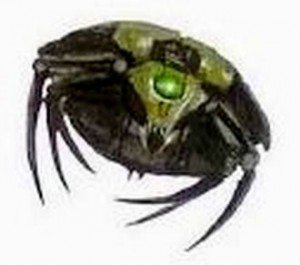 Welcome to another fun filled review of a Necron Unit brought to you by the Sweetheart of 40k – Goatboy.  This review is about one of the initial boogie men/bug/etc. of the old Days – the Canoptek Scarab.  Make sure to check out the Frontline Tactics Corner for more unit reviews.

When the initial new Necron codex came out the internet chattered on about the newest bad boy on the block – the Scarab Farm.  This was in the hey day of 5th edition when a codex would come out and a ton of models were not even available.  The initial builds were looking at how best to abuse the so called “Scarab Farm” that utilized a ton of Canoptek Spyders and a unit of Canoptek Scarabs they could add on too.  They would sit for 2-3 turns, generate a big fat mess of robotic babies, and then throw them at you in a huge blob of doom that would kill everything through a ton of attacks and the old rules for Entropic strike.  Of course as editions change, armies evolve and while the Scarabs are not nearly as nutty as they were before they are still a pretty strong choice in a codex full of mean options.

Currently this unit is used in the same way as before – it just isn’t nearly as brutal.  The rules for creating and adding to the unit have gotten better for the Spyders while the rules for the Scarabs themselves have been toned down.  They still get a ton of attacks but instead of removing armor they wound/glance everything on a 6.  They lost some of their armor save and with the other changes to swarms they are not nearly as resilient as they once were.  Still, they can make for a great build-up, attack and board control unit especially with the changes to armor construction and some formation options that can help build up the power level of those pesky little annoying buys.

There aren’t many upgrades involved with these guys.  In fact, all you can do is buy more in the initial squad size.  While there isn’t much to do there they still get the fixed Entropic Strike – which causes an auto glance or auto wound on a wound/penetration roll of a 6.  Again this isn’t something that is going to win you games but it does mean they are a threat to anything they hit. With their 4 attacks base you could see them overwhelming a lot of things like – say a ton of Rhinos or an Imperial Knight.  Their WS of 2 is rough but when you look at most things you will still be hitting on a 4 and hoping for that 6.

As I stated earlier – Entropic Strike is pretty neat as it always gives you a chance to do something and the other big rule is of course being a beast. The move fast, get in the way and really can be a great screen unit.  They also happen to be fearless which is always a bonus when you want something to stay stuck around for awhile.  They do have 3 wounds and unless you are strength 6+ it just means it will take awhile to get through all the chittering horde.  There is a formation (Canoptek Harvest) out there that grants the ability for the Spyder in the formation to give everyone else in that formation (1 unit of Canoptek Wraiths and 1 unit of Scarabs) a number of USRs or Reanimation Protocols, and if you plan on playing against the Scarab Farm list expect to fight against little robot bits that get to roll some Reanimation saves.

I have run against a few Scarab farm lists in my day and find them pretty interesting.  You take a Necron Decurion Detachment + Necron CAD – build out a basic Decurion with 1 Canoptek Harvest and then get 9 more Spyders from the CAD.  This gives you some Objective Secured and other options to help beat up on your opponent.  The 9 Spyders generate more and more scarabs and with Reanimation protocols they should survive.  A Solar Staff for added defense and a Sky Shield to be your “nursery” will help ensure your babies are born safe and ready to take on the world. Toss in a Res Orb to REALLY take them to the next level of annoying durability! The character hiding in the bug nest gets Fearless, which is awesome, but also slows them down, which isn’t so awesome. A character such as a Destroyer Lord, for example, helps a ton as his Preferred Enemy really benefits Scarabs who have so many attacks.

I have also seen Scarabs used as a decent meat shield to ensure you strong goodness is left untouched as you complete your grand Necron plan.  They could be a help versus some of the new GC’s that are out there as while they explode to stomps they could keep set of big monsters stuck for a turn or two as you set up a crushing counter charge or just zip past to grab the Relic, etc.  I get a feeling the swarm might do well versus some of the massed Rhino based Gladius as they can pop a ton of them and are somewhat immune to the ravages of Grav.  I can also seem them being useful to keep some of the damage from a Thunder Star stuck to beating on tiny insect robots while your Lychguard cuts down the “weaker” options in the unit.  This way you can sacrifice some of your army to keep your stronger choices ready to strike back and hopefully earn their cost back during the battle. Scarabs are great for backfield disruption, too. They may not kill things outright, but they rock at holding things up in combat and killing weak MSU style scoring units.

One nasty trick with these little guys is to have the Spyders nearby add Scarabs to the unit in front of them (and remember, you create the Scarabs at any point in the movement phase, so you can move the Spyders first!), granting them some extra distance, and then moving the unit forward. If the enemy deployed poorly, they will now be in charge range as early as top of turn 1!