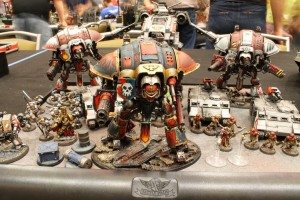 Hey everyone, it’s Adam from TheDiceAbide.com. It’s been a while since I’ve talked about Imperial Knights, but damn, Freeblade has inspired the crap out of me! Be sure to check out the Tactics Corner for more great articles!

I’m not your normal player by any means of the imagination, instead of trying to take what’s good, I often am taking what’s good enough, but also hilarious or interesting to play with. I’ve talked before about running Space Marines, Adeptus Mechanicus and even Legion of the Damned as allies, but what about the “other” Imperials?

First up we have what is possibly the smallest possible army in all of 40k! Taking 4 Imperial Knights plus an Assassin means you wont have a lot of models to keep track of, but at the same time, it means nothing is even remotely close to being expendable!

The Atrapos has given Imperial Knights a new model that is just fantastic for a Warlord. It carries two ranged weapons so you can charge a different target than attacked with it’s primary weapon, has an Ion Flare Shield and HP7  which makes it insanely durable, and even has a 6+ chance to recover a HP every turn. The Castigator is still an amazing tool to handle hordes, while the Crusader and Paladin are both dishing out a massive amount of firepower. One of the biggest threats to this army is the notorious Death Star. While stomps in combat can help with them, relying on that 6 isn’t what I could consider a reliable plan, so my choice of assassin is the Culexus, who can try to run up and turn off enemy buffs, before you charge into the unit with multiple Knights. If Death Stars aren’t popular where you live, I would recommend a Vindicare instead to help kill power fists, melta bombs, and melta guns that can threaten your Knights when they get close.

But what if you want ALL the Assassins?

Similar to the list above, but sacrificing the Atrapos for 3 more assassins! Between the Castigator cannon, the Warden and the Crusader’s avenger bolt cannons, you’ll hopefully be popping open enough transports a turn to let the assassins brutalize the juicy insides. I haven’t dared put this on the field yet, so results are not guaranteed, but it does seem fun as all hell at the very least!

Last edition book, this was my bread and butter. Imperial Knights needed help dealing with transports, as well as putting fast pressure onto the enemy, and I didn’t want to deal with foot slogging a bunch of infantry across the board, but how do they work in a 7e list?

The biggest difference you can see right off the bat, comparing the list to the picture, is that it loses a Nemesis Dreadknight. That’s kind of a bummer, but it’s the price you pay for new toys! This Atrapos warlord is as hard to kill as you can get, with both a 6+ chance and a 5+ IWND, to regain HP every turn, it will be a bitch to kill. Additionally, this list sees the Paladin upgraded all the way to the Knight Crusader, which brings quite a bit more firepower than the NDK was offering, though is a bit weaker in combat. With two Cerastus knights in the list it doesn’t look like a conventional knight army on the table, but it will still hit like a ton of bricks. Flyers will always be a problem, but the twin-linked castigator can help in a pinch, as can the Crusader (especially with Prescience).

Why? Because you hate the way armies are normally built and want to totally mess it up. That aside, it’s actually the only way to get multiple scoring units, on top of taking 4 Imperial Knights… What?! That’s right, you heard me. Inquisition units come cheap, dirt cheap, and with only 140 points to spend, you can actually still get a handful of scoring units to support your Knight army.

This is one of my favorite recent machinations.  Not only does it have 4 knights, but it also has a small handful of units capable of scoring backfield objectives with no qualms. It brings the same 4 Knights that the assassin list had, so there’s no real loss of fire power, and the additional units with transports will go a long way in scoring Maelstrom objectives. Lately, as I’ve been playing my Daemonkin, I’ve discovered that Servo Skulls are amazing for keeping scouting tar pits like Flesh Hounds away, while simultaneously making your firepower more accurate with the rest of the army . I wish it had enough points to get something interesting on the units, but them’s the breaks!

It’s going to take a lot more than playing Infinity to get me to stop thinking about Imperial Knights! Naturally, it didn’t help that I’ve become addicted to playing Freeblade… which holy crap, if you haven’t played it yet, go do it, NOW! As much as I positively hate fremium games, this one has hit me right in my weak spot and I’ve succumbed to the awesome glory of stomping around on Orks and Khorne Chaos Marines.