Do not, my friends, grow addicted to Armor Saves, for they will take hold of you and you will resent their absence.

Click to read on, or check out more reviews and articles at the Tactics Corner.

Necron Immortals, the oft-forgotten second troop choice in the Necron codex- though they’ve changed a decent bit over the years, ironically in a lot of ways they have been the most consistent unit in the codex. They have, more than any of the others, maintained their statline and general role of being the more “elite” cousin the the Warrior, but for a general looking to build an army the question becomes one of why you would take them over their cheaper, more numerous compatriots. 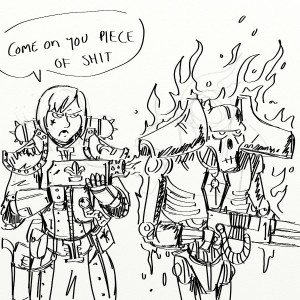 Measure of the Man

While Immortals have a statline that is pretty close to that of a standard Necron- BS4, S4, T4, Ld10- they have one very important feature that sets them apart from Warriors: the 3+ armor save. Since AP3 is essentially the breaking point for “heavy weapons”, this is a very important point to note- while you see lots of AP4 weapons with multiple shots (including Autocannons, Heavy Bolters, Missile Pods, and more) multi-shot AP3 guns are few and far between. Beyond that, nothing particularly distinguishes them as exceptional- they come in at a reasonable 17pts per body, a bit expensive for a MEQ but quite bearable at the end of the day.

Immortals’ one other advantage is their weapon- they come stock with a Gauss Blaster (S5 AP4 Rapid Fire) and can swap for a Tesla Carbine (S5 AP- Assault 1). Both weapons have their advantages, depending on the role you use them in- Gauss is better at short ranges, against very heavy vehicles, and against light troops out of cover. Tesla, on the other hand, is best at mid-to-long range and performs passably but not exceptionally against most everything but vehicles.

Immortals can also select a Night Scythe as a transport, like Warriors, but do not have the option for making use of a Ghost Ark. 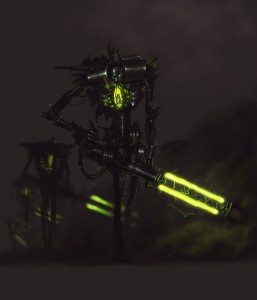 At a first glance, Immortals are not a terribly exciting unit. They are a little bit tougher than a Warrior and slightly shootier, but more expensive and with fewer options for transport and squad size. We would be forgiven for thinking that they are strictly inferior from a play perspective, but looks can be very deceiving and Immortals have several interesting features to offer a canny general.

First off, they can be taken in squads of five, whereas Warriors start at ten. This means that Immortals are actually the “cheap” troop choice even though they are more expensive than Warriors on a per-model basis; 85pts fills a troop slot with Immortals, but for Warriors you’ve got to spend 130 on it, more than a 50% increase. If you’re looking to squeeze every ounce you can out of a CAD or other detachment, this can be a very important difference.

Second, let us set the record straight: despite appearances, Warriors are the resilient troop and Immortals the shooty one. The raw statlines often make it seem the other way around, but despite the improved armor save Warriors’ superior number of bodies will win out over Immortals in most cases- but not when it comes to firepower, where the option for Tesla, improved AP value, and higher Strength on the guns give Immortals a significant edge.

So, we want to use Immortals typically in small, high-value groups to drop out and do some killin’. Hmm, what sort of vehicle would go well with that… perhaps some kind of flyer transport? That doesn’t need to hover? And has a good gun for cracking transports itself? Yes, I’m being coy- the Night Scythe is a perfect complement for Immortals, with its ability to deliver them to virtually any point on the battlefield whenever you need and protect them form hostile firepower in the meanwhile. Squads of five Immortals falling out of a Scythe are a great way to steal enemy objectives late in the game (and, as mentioned, you’re spending a fair chunk fewer points on such a plan than you would with Warriors) but they can also be dropped near a vulnerable target to hose it down with shots and try and pre-emptively eliminate it- at point-blank range, Immortals will win firefights with most codices troop choices pretty handily, and 3+ armor means that if they are charged, they won’t just roll over and die.

That’s not to say that they are… ahem, immortal, as they can still be Swept and will still fail saves like any other MEQ when the enemy starts throwing bullets at them, but they have the resilience common to many of the Necron “elite” units without the price tag associated with such units, so they stand in a pretty good position to hold up well under fire, or at least as well as can be expected. Don’t overextend with them or expect them to weather shooting from dedicated firepower units and you’ll be pleasantly surprised.

One last note on armament: while previously Tesla has been the superior gun, due to its utility during Snap Shots and long-range firefights, with the changes of the codex in 7E Gauss has moved up significantly in comparison and is probably the superior loadout in most cases. For the token squad of Immortals present in a Decurion that have no particular plan other than “stand around, score an objective I guess?” Tesla will probably serve well, but for squads in Night Scythes you probably want the utility, AP, and doubletap from the Gauss Blaster, as you’re much more likely to be fighting in a close-range environment and/or having to try and down a heavy target like a vehicle. 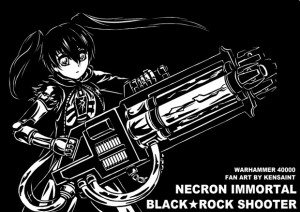 Immortals aren’t a terribly complicated unit- they are a very bog-standard troop with a few statline bumps here and there and a bit of extra resilience, but at a slightly higher price than average. If you’re willing to pay a bit more for a quality unit, they can be a pretty excellent choice- and there are several HQs in the codex that can potentially buff them, a handy bonus. They aren’t the default troop of most armies and they aren’t really intended to be, but they have a definite niche within the field, so they’re well worth keeping in mind when you build.