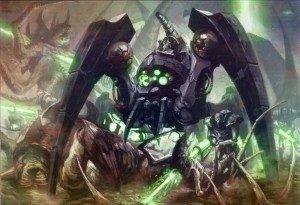 Goatboy here again with another Necron Formation review – today its about the Formation combo of the Triarch Praetorians and Stalker into a pretty rough counter assault unit.  As usual you can read up on more reviews in the Frontline Gaming Tactics Corner.

The Judicator Battalion is made up of 2 units of Triarch Praetorians and one unit of Triarch Stalkers.  They have all their benefits, plus any benefits given by the Decurion Detachment if they are taken within it, and they have their own updated set of rules for no additional point cost.  This formation almost feels like a Police force as the Triarch units are known to operate outside the normal Necron host – providing a tough counter assault unit as well as granting the normal Triarch benefits to nearby squads. 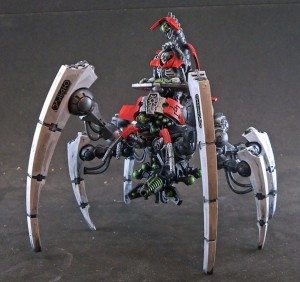 This unit can be taken as part of the Necron Decurion and thus can benefit greatly by the +1 to their Reanimation protocols as well as the Stalker always ignoring any crew stunned or shaken results.  The Praetorians get Move Through Cover which is a pretty nice bonus for a jump infantry unit. Their ability to pick a unit and gain a significant advantage when they attack that unit is a huge bonus as you can easily make such a damaging attack that you can easily kill most other units in the game.

The formation consists of 2 squads of Praetorians and one unit of Stalkers with no changes to their load outs.  I would still run the Stalker stock with the Heat Ray and then have one unit of Prateorians with the Convenant Rods and the other unit with the Voidblades and Particle Casters.  This lets you have a good set of choices to deal with most types of enemies.

The additional rules granted by this formation is Move Through Cover and the ability to pick an enemy unit within line of site of the Triach Stalker and the units in the formation get to reroll to hit, wound, and armour penetration when targeting the unit.  This can be pretty brutal as each Praetorian shoots decently and then can charge in causing a ton of damage.  We all know the power of a reroll! Math starts to brutally beat your opponent as you force so many wounds/saves on your opponent. Also, twin linking makes this formation good for shooting difficult to hit things like flyers and invisible units, too!

I played against this formation once and took a ton of wounds.  The Grand Necron master – Ben “Bad Touch” Mohile schooled me pretty hard when I tried to shove a SW deathstar into his part of they yard.  The formation hit so hard that I was losing dogs, bikers, and wounds left and right and barely hit and run out of it alive.  I did not win that game as I was severely depleted and just hoping for the end of the game on turn 5.  This is a neat formation to add to the Decurion as you can easily push larger squads of Warriors and utilize the added Stalker ballistic skill benefit to the other parts of the army list.

You can’t be too aggressive with them as all parts of this formation need the armies support to not be left out in the open and picked off.  This formation is a great add on and really helps create the metallic horde of death you expect when you think about the Necron army.  As the detachment gives you Move Through Cover you don’t need to be a part of the Decurion in order to fully utilize this.  Sure we all know how strong the Decurion is but with threat of a massed horde of free rhinos bearing down on you – having some Objective Secured can help.

The 2 Praetorian units are great, flankers as while they don’t hit as hard as say a Lychguard unit they do help out with their added ability to assault well and shoot well too.  This way you try and envelope your opponent.  Also since the unit is fearless you can keep some of your other weaker units from getting run down as the Praetorians keep the assault locked up and your Warriors/Immortals can break, run, and hopefully recover and still help hold an objective.  The overall Tactic for Necrons is just winning through sheer attrition and this formation can be a big help as your extra 3rd and 4th strong assault unit.