The chariot that started it all and arguably still the only one that matters, today we talk about the Command Barge. Click to continue reading, or check out the Tactics Corner for more reviews and articles. 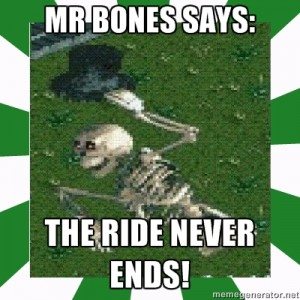 The Catacomb Command Barge is essentially unique in the game; while there are technically other chariots (SW get one, Daemons have two) your chances of actually running into them- and having their rules matter at all- are pretty low. The CCB on the other hand, while not a top-level tournament competitor, is definitely strong enough to be worth thinking about even if it doesn’t make a top of GT wins. It combines many of the strengths of an Overlord or Destroyer Lord with some unique features of its own as well as having excellent synergy with several possible Necron strategies.

The Command Barge’s basic setup is relatively simple- it’s a Necron Overlord standing on an Annihilation Barge. Unlike the other Necron vehicles the Command Barge is actually Fast in addition to being a Skimmer, but apart from that it’s pretty identical; AV11/11/11 with Quantum Shielding boosting it to AV13 in the front/side until it takes a penetrating hit makes it quite hard to hurt and the Overlord’s excellent statline (S/T/WS/BS5, W3, A3) and Reanimation Protocols makes it doubly resilient. The chassis comes with an underslung Tesla Cannon (S6 AP- two shots) and the Lord himself comes with a Staff of Light, giving it a minimal shooting capacity overall, and the 3+ armor is passable if not exciting.

The Command Barge has pretty much all of the upgrade options that an Overlord does; as such, the Warscythe is essentially a mandatory trade as usual (otherwise what do you think you’re doing with your Barge?) and the Phase Shifter all but mandatory. Note that the Phase Shifter’s 4++ save explicitly only applies to the rider, not the chariot- but this is not true for the Phylactery, which is specifically noted as affecting both “halves” of the model and thus gains significantly in value compared to other characters. The Flame Gauntlet also gets a small boost, since it helps stifle enemy charges and cut down on hordes, which we can otherwise be a bit hard-pressed to deal with effectively- however, it’s certainly not a given.

In terms of relics, the Nightmare Shroud (2+ armor, one-time morale check for an enemy unit within 18″) is a very strong candidate because of the way that damage works with the chariot, which we will get into in a moment. Failing that, Voidbringer is a very solid option as we will almost always be getting into combat with out character. The Solar Staff would be great if we had a way to get another weapon to exchange for it, but since we can’t it serves little purpose. 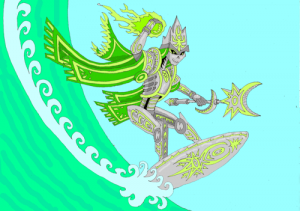 The Barge’s real strengths come up when you start getting into its special abilities. Though it obviously has Reanimation Protocols and lacks Independent Character, there are actually rather a lot of rules bundled in with it. First and most noticable is the Command Wave Override, which allows all Necrons within 12″ to reroll Leadership checks. As we’ve mentioned before, while Ld10 seems really resilient, it’s actually a lot more unreliable than you might assume when you don’t get to ignore the penalties for failing the way Space Marines typically do. As such, this is actually a pretty strong ability, although due to the nature of the CCB’s usage it doesn’t come up as often as it might otherwise.

However, above and beyond that we have a ton of rules that come with being a Chariot that we shouldn’t ignore. First off, characters riding a chariot are Fearless (since the chariot itself is a vehicle this makes sense) and thus we have no need to worry about losing a combat by one and getting awkwardly Swept. Second, they have Hammer of Wrath and inflict d6 S6 hits when it triggers- not a blowout ability, but can add a little bit of damage to things in the right circumstances and relatively handy. The vehicle chassis has Jink, allowing us a free cover save (since our shooting hardly matters), and we also are functionally Fleet, as we are able to reroll either or both of the dice when making a charge, as well as being Relentless for whatever good that might do us.

Because it’s extremely confusing, let’s also take a moment to go over the rules for chariots here. A chariot functions in a lot of ways like a walker with an infantry model “riding” it; it moves just like a normal vehicle (including being allowed to Flat Out if it wants to), but like a walker it is allowed to declare assaults and fight in combat- and enemies always hit its front armor in close combat if they strike the vehicle.

The dual nature comes into play whenever attacks (either shooting or melee) strike the chariot; as it has both a vehicle and infantry statline, each attack needs to be allocated to one or the other. Against shooting attacks, the chariot’s owner gets to decide where they strike (except for blasts and templates, which always strike the vehicle.) This is extremely powerful, as it allows you to take the nature of the attack into consideration on a case-by-case basis and decide where the damage goes- if it’s a Meltagun you’ll probably want to put it on the rider, but Boltguns obviously go on the vehicle. Note that we are allowed to decide where the hits go after we see how many of them there are, but all hits of a given type must strike the same “portion” of the chariot, at least from a single shooting attack. In melee, however, it is the opponent who gets to choose how the damage is allocated- though regardless of which portion is attacked, the enemy must roll against our normal Weapon Skill to hit us.

Lastly, the vehicle treats all Immobilized results as Crew Stunned (which we can ignore if part of a Decurion, remember) and failed Dangerous Terrain checks simply cost us 1HP, nothing more. 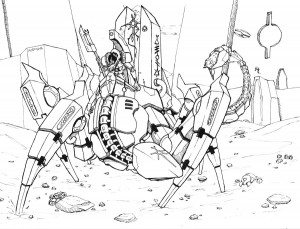 The Use of the Thing

What this adds up to is that the Command Barge is incredibly fast, incredibly tough, and strong in a fight- and that’s a combination we can be happy about. While Quantum Shielding is up, we’re able to shrug off all weapons S6or lower unless the enemy is in our rear arc, and as already alluded to the rider can use the combination of 4++ and Reanimation Protocols to shrug off the high-strength weapons that threaten the vehicle chassis (including Haywire and its ilk.) The only truly dangerous weapons to us are S10 shots (which can both penetrate the vehicle easily, disabling our Shielding and squish the rider in a single hit as well) and Str D (which is just immensely bad for us on a variety of levels.) While this is definitely an unfortunate weakness to have in the current environment, with Wraithknights and D-Scythes common sights not to even mention Imperial Knights, it’s a problem common to a lot of Necrons and not something we can really do much about.

More than anything, immunity is the big strength of the Command Barge. S4 or lower shooting simply cannot hurt us, period; it bounces right off the vehicle- and until we lose our Shielding, S6 really can’t, either. Being able to simply say ‘no’ to such a huge class of weaponry is a really big deal, and far better than even a 2+ rerollable in that regard. Dice always have a chance to fail you- that’s the nature of randomness. But the CCB’s immunity is a guaranteed thing, which is what makes it so powerful- it doesn’t matter how many Bolters the other guy has, they can never, ever affect us. And while we aren’t literally immune to other weapons, we are immensely resilient to them, especially if we bought that 2+ armor; at that point, only a pretty limited subclass of weapons (high-strength, low-AP, lots of shots) can realistically expect to bring us down, as we functionally have five-ish “wounds” to chew through between the Barge/Overlord before the whole contraption comes down.

Now, add in its speed- as a vehicle we can move 12″ and as a Fast Skimmer we can Flat Out for 18″ more. Terrain doesn’t slow us (though it might occasionally tick off an HP if we get unlucky) and we can reroll charges, all but guaranteeing we get into combat early on. And hiding in combat can be an excellent way to avoid enemy shooting as we regen some wounds or HP via It Will Not Die, then hop out to keep killing.

And the Barge is certainly killy enough; though it doesn’t put out exceptional amounts of damage, between Hammer of Wrath, the Warscythe, and being extremely tough to hurt (with the 2+ armor save being extra-critical in a fight where the enemy gets to allocate damage) we can often grind enemies down while losing little to nothing ourselves. We might not put out as much damage as some other HQs, but it’s more than enough to clean up vehicles, MCs, and basic infantry squads. We need to be careful about what we go after- tarpit units are a real problem, as are high-power enemy melee units, but for the most part we can freely target most units we expect to face and not worry about it.

The Command Barge makes an excellent complement to Wraiths or other aggressive Necron strategies; the same sorts of guns often want to shoot at both of them and the targets the Command Barge struggles with (melee deathstars) are ones that Wraiths are quite good against. Though it competes with the Destroyer Lord in this regard, the Command Barge can more easily slot into a Decurion (as it can take the place of the Overlord in a core choice) and is very comparable in price tag and overall functionality.

CCBs really shine when taken as part of a strategy that really makes good use of their strengths- either a full-on assault list where all the units are moving forward and getting into fights (and thus can support the Barge and cover its weaknesses) or as part of an AV13 wall where the enemy is less likely to have firepower to dedicate to killing it- or if they do, it detracts from taking out your troops, shooting support, etc. As with most things synergy is key, but this is especially true for the Barge because of the specialized nature of the tools needed to hurt it.

The Catacomb Command Barge ends up filling a pretty similar role to several of the other Necron HQs at the end of the day, but it’s unique enough that it’s not just automatically inferior (or superior) to them. Though it lost several strong features in the 5E->7E changes, it also gained a number of other advantages (not the least of which being price) and is thus probably a more fair all-around unit. If you’re running any significant number of other AV13+ vehicles in your list it can be an excellent inclusion that comes with a surprising number of little bonus rules in an army that is used to being pretty bland overall.