Hey everyone, I’m Scuba Steve! Today, we are going to be talking about the Necron Reclamation Legion formation!  As always, for more tactics articles, check out the Tactics Corner!

You Can Reclaim My Legion Any Day

We are going to be focusing all of our attention on the Reclamation Legion formation; the great thing about this formation is how universal its components are and how well those components function together to make something truly devastating. I’m telling you, right now, nobody says “No” to options… and the Reclamation Legion gives you nothing but options; it has really carved out a place for itself in any Necron army and its undeniable resilience is feared throughout all the gaming stores in the cosmos.

Alright, let us quickly go over exactly what a Reclamation Legion is comprised of:

Additionally, the Overlord may be switched out for Nemesor Zahndrekh, Trazyn the Infinite, Anrakyr the Traveller or a Catacomb Command Barge.

…and get this, the whole thing has NO RESTRICTIONS! I don’t know about you guys, but I did a back flip when I read this! (Not really, I’m a pretty fat guy and I have nice furniture and stuff, but I digress)

This Certainly Looks Awesome… But How Should I Play It?

Now, what can you do with all of these options!? With so many ways to play this formation, your head can start to spin pretty quickly… but take a deep breath and slow down, Scuba Steve is going to walk you through it. The easiest way to wrap your head around using this formation to its maximum effectiveness is taking it step-by-step. In my research and experience I have found that there are two really great ways to play this formation that have proven to be really effective if played properly (There are definitely more ways than just these two and every player is a little bit different, so if you have found an alternative way that works for you, that’s awesome!).

*It is good to note that because the Reclamation Legion is the core choice in the Necron Decurion Detachment (which allows all units with reanimation protocols to benefit from a 4+ reanimation protocols) the most common place you see and use this formation is inside that multi-formation detachment. 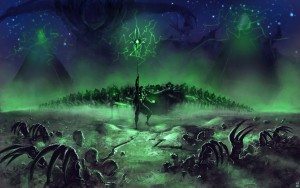 The first way I’m going to talk about is one that I affectionately call the “The Neon-Green Tide” (Ork players will get this right away). The basic strategy here is to crowd the table with so many Necrons that your opponent has little to no-way to deal with them all. With maxed out units of warriors, you simply march forward, shooting every round and count on your heartiness to carry you through (which it does most of the time). A twenty man squad of Necron Warriors is only 260pts and you don’t need to spend a penny more, they come decked-out with all the weaponry you will ever need. Each Warrior sports a fashionable and deadly Gauss Flayer, essentially a Bolter with one incredible difference… Gauss. With the ability to harm infantry, vehicles, and monstrous creatures they are one of the most flexible units in the game. Because every weapon in the squad has the potential to hurt whatever they are shooting at, the time will never come where you are wondering “How do I kill that Landraider without melta weapons?”… and that is because you can always just shoot it with your basic weaponry! The effectiveness of Gauss weaponry is incredible, especially when you take it in the “Neon-Green Tide” when you will likely be rocking between 40-80 Necron Warriors. The more dice you roll, the better your chances to roll enough 6’s to glance any vehicle to death or put multiple wounds on Monstrous Creatures.

Additionally, the Warriors are incredibly resilient. With a 4+ armor save and a 5+ reanimation protocols (4+ when using a Decurion Detachment and re-rolling 1’s when within 12″ of the Overlord), the chances of you losing swaths of warriors in a single shooting phase is rather unlikely. This means that you can feel relatively safe about boldly marching onto open objectives and taking comfort in the fact that, if you make a mistake here and there, the forgiving nature of the army will save your bacon when it matters.

There is a glaring downside to this strategy though… speed. Simply put, you are going to struggle to get your boots on to those incredibly precious objectives, especially in a maelstrom game. How can you solve that? Luckily the Reclamation Legion has a fix built directly into it, the units of Tomb Blades and optional Monoliths are your go-to fix for speed.

All-in-all, this tactic is really strong, the likely-hood of your opponent killing all of your models is very, very low; your opponent has to play to the mission, which has random elements and be very difficult to do when your models are absolutely everywhere. This is a simple and effective way of using the Reclamation Legion formation.

When you play this version of the formation your focus is speed and durability. By taking minimum units of each type allowed in the formation (aside from monoliths) you can fit so many of them into your list it isn’t even funny. This can be easily applied to two ways:

Both of these applications are very strong and can be radically effective when playing to the mission. With that being said, I caution every player using these tactics that because you have fewer models in each unit (and more points tied up in transports and elite units) you will be feel every model loss and the units will lose their effectiveness as they dwindle in number.

Absolutely not! There are a few things that really piss in your cornflakes, so make sure you make a plan to play around armies that have the ability to take advantage of your weaknesses.

The biggest shortcoming with this formation (also with the Decurion Detachment in general) is the army wide absence of Objective Secured. I’ve seen Necron players lose their coconuts over an Objective Secured Drop Pod that’s losing them the game. So, what can a humble Overlord like yourself do? Well, this is the time when you have to be smarter than the average universe conquering robot. If you’re playing “The Neon-Green Tide” version of this formation, take your Necron Warriors and spread the hell out, stretch your army to the max and cover those objectives, a unit can’t steal it from you if they can’t physically get there. Additionally, get aggressive with those Warriors, if your opponent is getting close then take a squad of Warriors and get in the way. He can’t move within 1″ of your models unless he is prepared to assault them, block him from getting within 3″ of those objectives.

If you’re playing the “MSU/Gateway Formation” version of this list, you really need to rely on your target priority, if your opponent is using a C.A.D., target the Objective Secured units first, try to even the playing field. Additionally, use your speed to control the table, Wraiths and Ghost Arks are quick, lock your opponent’s Objective Secured units in combat away from the objectives. I’ve always believed that the way to truly win a maelstrom mission is to not only focus on scoring the points myself, but to deny my opponent scoring as much as possible. You have to think ahead to both turns (yours and theirs) and deny as much as you can.

I would always suggest playing this formation in a Decurion Detachment, the Ever Living special rule (4+ reanimation protocols) is WAY too good to simply ignore when fielding this formation. Additionally, the auxiliary choices are so varied, that you can spend an incredible amount on additional options or a very minimal amount and still benefit from the detachment’s special rules (Deathmarks (90pts), Flayed Ones (65pts). It also allows you to side-step detachment restrictions, because the multi-formation detachments only count as ONE detachment, you still have two more detachment slots (in the ITC) to build your army with.

The Reclamation Legion is, by-far, one of the most diverse and flexible formations and I have seen it prevail time and time again in both casual and competitive settings. By the end of the game you are going to have so many models left on the table and your opponent will be screaming “Why won’t you die!?”. Clearly, this is a staple in most Necron armies and for good reason. The formation’s strength is paramount and barely marveled in the grim, dark future.

Leave a Reply to Amberclad87