Ah failure….its salty bitter taste never truly satisfies. Captain A here to share my failure as a gamer and hope to glean some lessons that might help you out as well.

I’ve noticed many a gamer only share when they win said tournaments, but not me! I will share all the good and the bad, the glory and gory. Gather around little 40k campers and hear my tales of woe.

The Guardian Cup is a series of tournaments held at Guardian Games in Portland, OR. We do one large GT at the end of May and a few smaller RT’s throughout the year. We also use a trio of judges so that all can play. I can count the number of issues I’ve had on one hand and even then they were rather minor. That is one thing I really appreciate about this group as a whole is that we rarely have issues with gamers and people are pretty adult overall about things. Makes my job easier.

This year we had all participants over 21 as our own JWhitey had just crossed the line of true manhood and no longer had to be regaled to the kiddy table. That meant we could do the whole tournament upstairs in the bar area and not have to travel up and down the stairs.

We ended up with 24 players (23 with my ringer playing) and set off to gaming! 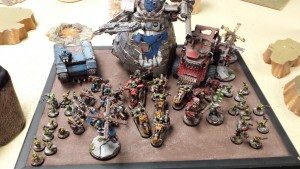 Round one I got to play a local player Daniel, whom I hadn’t played before but was excited to see what I could do. He was running a Stompa with a big mek, small Snarf Snarf (Zardsnark) squad, Battlewagons with Lootas and Nobs, 3 Deffkoptas, and Grots.

The mission was ITC #2 and Daniel made me go first. I went in hard and tried to put as much damage on that Stompa as I could and I think I ended up putting 5 hull points on it. Not a bad start, but not enough for sure. He returned in kind going after my second squad of Centurions and ignored my Centstar. His Stompa went after all my little squads and my Centstar and Dreadknight went after his. It ended with my Hammerhanded Centstar charging into the Stompa to finish it off in close combat and taking the game.

I think Daniel should have tried to go after the Centstar more with his Strength 10 ap2 7” pie plate of doom as it could have done some good work on that unit if it hit. Draigo would have had to tank all the wounds as everything else would have been instantly killed. Either way it was a fun game and cool to see a Stompa in action. 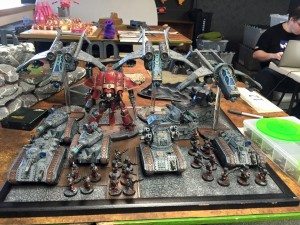 I’ve played Orin once before with my Big Guy Little Guy list and lost handidly so I was out for revenge. He was playing an Errant Knight, Pask and 2nd Punisher, 3 Wyverns, 2 Vet squads in Chimeras, 1 Vulture, 2 Vendettas, and…a Cullexis Assassin that rode in one of the Vendettas. We were playing ITC #4 and he made me go first (good choice). I went in hard and immobilized Pask as well as taking out his Errant Knight. In hind sight I should have went harder on the Wyverns and Punishers as the next turn he hit with pretty much every Wyvern and did a good amount of wounds to the Centstar. Next turn I took out two Wyverns and Pask, but then that Culexus came in and shut things down. He had to stay close and put things into hover mode to do it, so Draigo continued to go after things, taking out a Vendetta and the other Leman Russ Tank as well, but by then I was scrambling to stay alive. Turn five I would have won as I was up on Maelstrom and had warlord and big game hunter. Turn six was a draw when he got linebreaker, but it went to seven and he wiped out my last squad.

Lesson here for me is that I should have gone after the Wyvern’s first. I would have had to face one round of the Knight, but then could have gated out and continued to work. Lets say he hits the whole squad and does 7 strength 9 hits. 6 wounds with Draigo failing one save. The scary part would be the charge should he get it and avoiding a Stomp of 6. Probably a better risk than twin linked shredding Barrage weapons. I should have also ran and hid my other units when it was clear that I couldn’t get the primary and had the secondary locked. I may have been able to hold out and win or tie the game.

Round 3 – Shaylynn’s Nemesis GK and Skyhammer 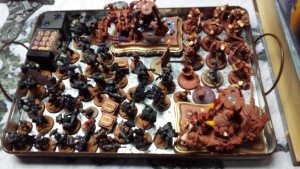 Shaylynn was running a clever list with the Nemesis Strike Force with a Librarian, 2 GK Terminator Squads, 2 Dreadknights, A Skyhammer Force with MM and Grav and Assault Squads with flamers, and an Inquisitor and small Heavy Bolter Retinue with 3 Servo Skulls in a Imperial Bunker. So the Servo Skulls prevent infiltrating and scouting against her and make her deep strike 1d6 instead of 2d6. Mission was ITC #6. Biggest thing for this game was she won the roll off to go first and made me go first instead. I deployed the Censtar and gated up to the middle to get into position and powered up with Invisibility, Forewarning, Sanctuary, and I forget what else.

I’m going to blame some of this on bad dice as it felt that my 1 out of 6 rolling 1’s was more like 50/50 rolling ones, but the biggest factor was underestimating another heavy psyker army. I should have gone much harder on Invisibility as she was able to shut it off and whittle my star down. Then when my Dreadknight came in he misshaped and rolled a 1. Sad face. Whadya do?

Lesson here for me is if I have a psychic heavy army, pretty much split my dice and roll half on Invisibility and half on another power like Gate or Prescience.

So in the end I went 1-2 and still had a good time. Learning from failures is very important in this game so I was glad to take those with me to TSHFT and LVO this next year. What about you? What big lessons have you learned from your failures? Post your thoughts below.

Leave a Reply to 1PlusArmour