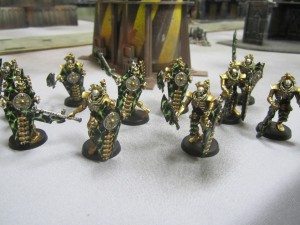 Goatboy here with a brand new review of the Necron Lychguard aka the Lynch Pin of another 40k Death Star.  Check out the Tactics Corner for more Unit reviews.

Lychguard are known as the “command” squad for the Necron HQ characters.  Instead of focusing on a mixture of shooting/assault the Lychguard rely on their superior stats, weapons, and tough Necron rules.  Through a mixture of specific HQ and formation combos you can create a pretty tough Death Star that is both hard to crack and deals a good deal of damage. 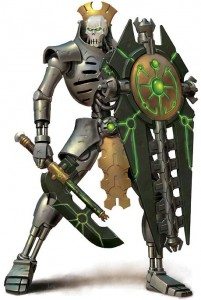 This unit consists of 5-10 Lychguard models with 2 different Melee options available as well as the ability to take a dedicated Night Scythe transport. They have the normal Reanimation protocols ability as well as the beefed up stats of a Necron Overlord – Strength and Toughness 5 with 2 base Attacks and a 3+ armor save.  One melee option gives them a Warscythe while the other gives them an Invulnerable save plus a weaker close combat option.

The  Warscythe grants +2 to the users Strength, is AP 2, and grants Armour Bane.  All of these options make this weapon a terror for Vehicles and other Walker Based combat giants.  The other load out option is the Hyperphase Sword and a Dispersion Shield (3+ invulnerable save).    The Hyperphase Sword is Strength as the user and AP 3 – so decent when fighting regular infantry but at a disadvantage when fighting against some of the tougher close combat giants like Thunder Wolf characters or Space Marine Super Heroes.  The Sword and Board costs an extra 5 points per model so it isn’t cheap as the unit is still expensive.

This unit has Reanimation protocols like the majority of the Necron army.  This lets them become very tough to deal with as they will always have some sort of save.  When you mix this with some Formation rules (Reclamation Legion) and HQ combos you start to have a unit that gets a ton of rules to ignore your damage output.

As I stated earlier – this unit is normally used as part of a Death Star the Necron army can bring to the table.  I normally see 10 Lychguard equipped with Warscythes with attached HQ to give them a boost.  A Destroyer Lord with the Solar Staff as well as a Cryptek/Lord with the Veil of Darkness means this unit can start in the corner and teleport right front and center of your army.  I also see the Character Orikan added to the unit as a way to grant more rerolls with the ability to re-roll saving throws of a 1.  As this unit is part of the initial Necron Decurion detachment it is very easy to add into the army and use.  They also get access to a Night Scythe as a transport so they can easily start off the table, come in, and deploy wherever they need to be.

I have seen others utilize a mixed Lychguard unit to try and create as much protection as they can with Dispersion shields and Warscythes.  The only fear is massed D weapons as they ignore your Reanimaiton protocol and can leave you with an extremely expensive and vulnerable unit.  The benefit of this unit is that they are just very hard to remove and still put out a ton of damage.  The lack of Fearless in the unit by default will have to be watched but you can easily get around it with added in IC support by characters such as Zandrekh.

This unit is close combat heavier than the normal Wraithstars you see.  This unit tries to win combat through aggression instead of simply not losing combat due to resiliency.  It is still very tough to crack but it can start to lose out to massed stomps and other “combat” options that either ignore their saves or severely hamper their Reanimation Protocols.  You will want decent support to ensure your army will win the game as your opponent tries to figure out how to correctly deal with your Necron Bowling ball of doom.

I’m not sure I’ve ever seen them run with Warscythes. Admittedly, I haven’t seen them run all that often in general, as most of the Necron players I play are content with Wraiths as their CC solution, but when I have seen them, it’s almost exclusively been sword & board with multiple Warscythe-wielding ICs attached to provide the punch.

Lacking the ability to mix-and-match their weapons is a big disadvantage for the squad, to be sure; you want at least some Shields to bounce stronger hits, but with only the swords for combat potential you’re not killing a lot of stuff. Sticking several characters into the unit with Warscythes solves the problem, but there’s really no way to approach it from the other way around (i.e. sticking characters with good invulns in the unit and backing them up with Warscythes from the squad), hence the reason you rarely see it.

I think you could make an argument for five Warscythes in a Night Scythe, though- the unit itself is actually pretty cheap and if you were bringing other threats alongside them it could potentially work out okay.

Yeah, if you could mix and match, these guys would be so much better…although they already are quite good.

That would really put them on top yeah.

Yes. It is the only type of wound you can never roll RP (or FNP, for that matter) against.

I love Lychguard. I was the guy on day 1 of the codex putting Shieldguard with an Overlord and Orikan. But I dont think they’re a great competitive choice.

Speed reaaaally hurts them. Veil and Obyron are too unreliable with no scatter reduction, so that expensive Deathstar is likely to go somewhere less effective or even mishap. Night Scythes add to the cost and don’t come in until turn 2, so that melee deathatar can’t charge until turn 3 at the very earliest.

The best Deathstars out there currently are fast. TWC, bikes, Hounds, Seerstar – they all can get where they need to or away from things that beat them. A Deathstar that is often over 600 points once you add in characters needs to have an impact on the game fast, otherwise it’s kind of a waste.

Good point, their lack of mobility certainly does limit them a bit. When they get to grips with something, they tear it up typically. Although, I have had a single Wolf Guard Battle Leader with a 2+ save destroy the entire unit by killing a few and then running them down.