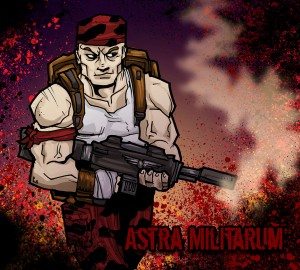 This week on List Review we’ve got an IG footslogger list backed by heavy tanks, flyers, and psykers- in short, all of the things you’ll love if you love Imperial Guard. Astra Miliwhatum?

So Imperial Guard. They’re actually pretty good, though you don’t see them all that often these days. They have a lot of good tools against many of the lists that are around these days, but they also have some significant weaknesses that can use covering. Different sorts of allies can do this to different degrees, but the keys are to cover the bases that IG can’t effectively hit, namely mobility and certain kinds of utility abilities (and shoring up morale and melee combat don’t hurt, either.)

So we have some pretty good tools in the list so far; giving Orders out to the squads with their weapons is a solid plan, and Preferred Enemy is a nice trick. We’ve got lots of Ignores Cover (via the Eradicators and Orders) and varying weapon profiles to go with it, which is excellent. We’ve got a pretty decent melee component from the blob units + Inquisitors, and the Vendettas give use some roaming firepower that can potentially hop on objectives on the final turns.

However, the list also has some serious problems- though the combat blobs are Leadership 10 and Stubborn, that still gives us a non-trivial chance of failing morale (because we’re gonna lose combat to anything that we don’t wipe out, generally speaking) and getting Swept. We also are banking a LOT on that Company Command Squad staying alive behind the Void Shield, which in a world of barrage weapons and mobile anti-infantry is a pretty big risk to be taking. We also are gonna struggle significantly with stuff like Wraithknights and other tough targets, not to even mention deathstars. 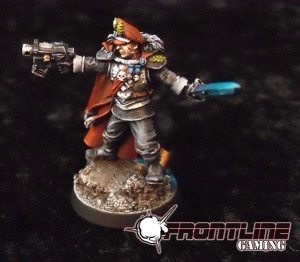 So, the question is, how to mitigate our weaknesses and improve our strengths? Well, our original poster was open to the option of Forge World (as a lot of groups are these days), so we have some possibilities there. We also have access to Ultramarines, as per the original email, which actually nets us some very useful tools as well.

The first thing we’re gonna do is cut the Void Shield and Command Squad. Void Shields are very strong for their ability to shut down anti-infantry tools and Grav weapons, but they can also be used against us and they commit us to particular deployments. Since this army isn’t really particularly vulnerable to Grav as a whole, I don’t feel it’s a tool that we really need to help ourselves. With the VSG gone, the Company Command is really just a walking liability- it’s an easy Warlord point for the enemy, fairly expensive overall for how fragile it is, and we’re centering a lot of our strategy on it.

What we’re going to look to instead is to replace it with something more resilient and effective- namely, Commissar Yarrick. Not only is Yarrick much tougher to kill innately (T4, 4++, Eternal Warrior, stands back up on a 3+) he can also hide inside one of our blob units. On top of that, he brings the “fuck Leadership checks” Commissar ability to the squad as well as a Power Fist, essentially giving us everything we could ask for.

Since we are running infantry blobs, we also have very little excuse not to be including Priests; getting automatic rerolls on the firs turn of combat and the possibility of better saves/wounds as well as Fearless is really good. For 25pts, we really can’t ask them to do anything more than that.

However, we want to keep our Leman Russes in the army because they’re actually pretty solid inclusions. The Exterminator is really only viable if we have a way to reroll, though, so we’ll need to look at options there; we can potentially just be casting Prescience on it, though that has issues of its own. However, we also have access to the Ammo Dump fortification upgrade, which gives us a 3″ radius of rerolling 1s to hit with it- while not quite as good as Preferred Enemy (as it doesn’t affect wound rolls) it’s not at all bad for a runner-up and is more resilient than the Aquila, since it can’t be shot or destroyed in any way.

That brings us to our next dilemma- the Inquisitors. Now, those Rad Grenades and Divination spells are great, don’t get me wrong- but on the other hand, with only two total Mastery Levels we’re unlikely to actually get off two Presciences per turn (and even one will be dicey a lot of the time, not to even speak of psychic defenses) and we aren’t realistically going to be able to have any other “utility” powers active at all.

Instead, a better solution is the Librarius Conclave. Although there’s arguments to be made for differing Chapters to pick it from, in this case we will use Ultramarines because of the already-existing models. Tigurius, with his ML3 (for casting three spells per turn), ability to reroll power generation and also casting powers, makes a fantastic focus for our Conclave, even though his Tactic ends up being all but worthless in this case. But between him and his two friends, we should easily be able to roll up whatever combination of Divination, Telepathy, and Maelific powers that we want for any given game. Invisibility and Prescience obviously have a lot of use, but Summoning (for Daemonettes), Incursion (for Screamers), and Sacrifice (for a Herald of Tzeentch) are also very handy.

The conjuration spells are important because they give us a set of disposable, speedy units that we can use to score Maelstrom objectives and harass the enemy with. They also can be a solution to many units that we would otherwise struggle with- for example, Wraithknights do not appreciate tangling with a squad or two of Daemonettes, who strike at the same time, hit on 3s, and rely on Rending to do all of their damage anyways. Bloodletters can chop up MSU Marines pretty easily, Screamers hit vehicles quite hard, and Flesh Hounds are fast and relatively resilient; there’s just a lot of very useful choices to pick from.

So, the last thing we have to touch on is the potential for Forge World units. While Vendettas are hardly bad vehicles, even with the changes, we have another competitor in the FA slot: the Vulture. With Strafing Run for BS4 (and naturally twin-linked guns), Vector Dancer to ensure we can always aim at what we want to, and AV12/12/10 to shrug off the vast majority of shooting, the Vulture is an absolute steal at 155pts for the Punisher Cannon variant. In the HS slot we also have the Quad Mortar/Thudd Gun- 50pts buys us an artillery unit with four S5 small blasts, a very solid price for a very resilient unit and well worth it if we have some change left over at the end of our list. 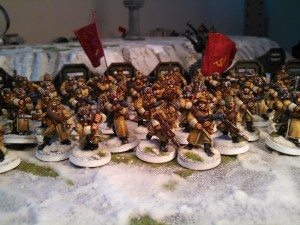 We’ve dropped the Plasmaguns from the Infantry Squads because we either want to be hanging back in cover and shooting Lascannons (and hence out of range) or advancing forward and probably Running a lot (in which case we also don’t get to use them.) This version only includes one Priest due to points constraints, but with the three ATSKNF characters and Yarrick that shouldn’t be a critical issue. We aren’t bound to either a purely-aggressive or purely-defense strategy, but rather are able to shift between either as the matchup demands. Remember that you can advance with most of a unit and leave the heavy weapons stationary in order to be able to sneak a bit of movement out of things while still firing for effect.

I trimmed down to two Russes, which makes the presence of the Aegis a bit more iffy; we might potentially replace it (and the Eradicator) with Commander Pask in his Multimelta/Lascannon Punisher for another source of firepower, but I’m not sure how I feel about that overall. Having the Aegis around is actually quite nice, since it lets us shrug off a lot of firepower any time we are allowed to take cover saves- especially if it’s Night Fighting or we managed to get Shrouding off.

The Conclave is absolutely key for this army- it gives us a fantastic toolbox of powers we can roll on depending on the situation and lets us use our psychic dice very, very efficiently. Perils is mostly a non-issue for us, a major advantage over most psykers; if we need to cast some Daemonology we can potentially pawn it off on one of the basic libbies rather than risking Tigurius, although he is more reliable. We typically want to having two of them in one unit (for casting powers) and they the other one will often be on his own in the other unit- however, taking a 4th Libby so we can have two groups of two wouldn’t be terrible.

I’ve dropped the Inquisitorial component from the army entirely, but keeping a single Inquisitor for Servo-Skulls and Rad/Psycho Grenades wouldn’t be a bad thing.

← Daily Awesome Conversion
We’ve Got Toughest Girls in the Galaxy in our Web-Cart! →