Not a lot of units live up to their fluff, but in a few cases they actually do- and the Destroyer Lord is one that largely does, being a unit wholly worthy of the name. Click below to keep on reading, or check out Tactics Corner for more reviews and information. 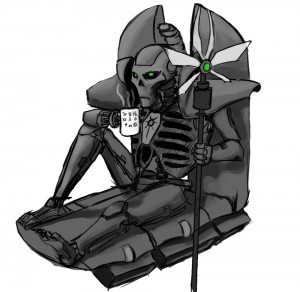 Easily the most mobile of the HQs (or at least the ones that can join squads), the Destroyer Lord is also one of the most melee-centric on the surface… but he does have some additional utility baked in that may not be obvious at a first glance, though typically it is in the melee role that he will shine best. Destroyer Lords are essentially just Necron Lords with a few extra bonuses bolted on, although changes to the statlines of the different HQs have left them stranded in somewhat of an odd place in that respect. But for all that they’re still an excellent choice and well worth fielding in many armies.

Let’s talk about the statline first, because it’s actually one of the main selling points of the unit. With Strength 5 and Toughness 6, not only can a Destroyer Lord wound nearly everything with ease, he also shrugs off attacks in a challenge from anything bar a Power Fist and is immune to Instant Death by virtue of weapon Strength alone (though of course Force and other special rules can still do it.) Three wounds puts him on par with an Overlord, as does three attacks and the standard Initiative 2, Leadership 10, and 3+ save. However, with only WS/BS4, they are noticeably lacking compared to an Overlord, hitting on 4s rather than 3s against standard targets. This is their biggest disadvantage, and one only somewhat mitigated by other factors. Finally, as Jet Pack Infantry, they get to largely ignore terrain and make the extra Thrust move in the Assault phase, which mostly makes up for the loss of their previous Jetbike status. 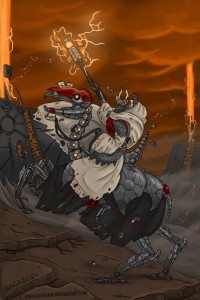 Destroyers come with surprisingly standard kit for a Necron character- Independent Character status, Reanimation Protocols, and a Staff of Light are all common feature to them, although it’s worth noting that the Staff is a change from previous editions where the Lord came with a Warscythe stock (and thus functionally acts as a 20pt price increase, despite their price technically remaining the same.) However, as with the statline, you get one extra bonus over other Necrons and it’s a big’un: Preferred Enemy. Not just for one faction or unit type, but for everything in the game.

Rerolling 1s against all targets on hits and wounds sounds a bit weaker than it is, though- remember, Necrons are BS4 in most cases, so you’ll essentially be getting to retry with half of all your misses. Applying to wounds as well is doubly-excellent, especially for the high-Strength weapons that many Necrons can have access to that will often wound on 3s or 2s. Rerolls are, often as not, one of the best things you can get in 40K and so having easy access to them on any squad you want is a pretty big deal.

Destroyer Lords have access to much the same wargear that an Overlord does, although they cannot take the ranged weapons (Gauntlet/Tachyon), little a problem as that actually is. As with the Necron Overlord, we will always upgrade to a Warscythe- it’s a fantastic weapon, made all the better by the speed and rerolls that we benefit from. (Note that, even with rerolls, we are actually worse overall in a fight against WS4 opponents than an Overlord is, although not by an enormous amount- and against anything higher or lower, we perform better.) This unfortunately ends up being a tax to raise our price to 130pts, but considering that, compared to the Overlord, we are paying 20pts to essentially mount ourselves on a “bike” (as we gain +1T and faster movement) as well as pick up Preferred Enemy, it is an entirely acceptable overall cost.

The survivability upgrades on a Destroyer Lord are a bit more debatable; Phase Shifter is certainly not priced unfairly, but as Destroyer Lords are often running with squads of Wraiths (who already have an excellent invuln) its functionality isn’t 100% required. However, that extra layer is always nice to have as a guarantee, so often enough we’ll shell out for it. The Phylactery is a bit more iffy, but should you have the points laying around it’s not a bad upgrade. The Resurrection Orb is virtually never worthwhile.

Our Artefact selection is likewise guided largely by the same guidelines as the Overlord, though with a few tweaks. The Voidreaper can be an excellent way to mitigate our lower Weapon Skill, although our innate rerolls make it slightly less necessary. The Nightmare Shroud, on the other hand, is exceptionally useful, as we will often be taking normal armor saves on our Destroyer Lords simply due to their forward-moving nature as they try to get into combat- and that free morale check is nothing to sneeze at, either. The other Artefacts are largely unneeded, although Gauntlet of the Conflagurator can be good for some giggles and Solar Staff has a few niche applications for reserve-heavy armies to insure they can’t be tabled. 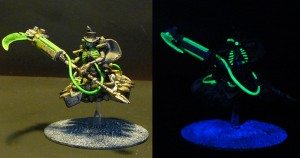 So where are we going to be taking a Destroyer Lord and what is he going to do? Well, the latter part is easy- he’s going to rush forward and murder the shit out of some guys, usually. Destroyer Lords are very aggressive characters in most cases, so it behooves us to make best advantage of that; however, they can also fill a role much like that of an Overlord, being used to anchor a battle line while providing support abilities if needed.

Most lists that want a Destroyer Lord will be pairing him with another fast melee unit, such as Wraiths, Scarabs, or Praetorians (with the former being by far the most common.) The Destroyer Lord is an excellent complement to such units- he gives them all rerolls when in combat and can potentially tank certain kinds of shots for them if needed (like an inconvenient shot that is causing Instant Death on the Canoptek units), but they also serve him well by being able to absorb the general volume of shots coming at the unit and providing additional hitting power in combat. Wraiths in particular suit him well, since they can swing ahead of most units and cut down on the number of attacks and chew up horde units, which the Destroyer Lord is ill-suited to fight. The fact that they are Fearless is an extra boon, as it means that unlike standard Necrons we have no fear of our unit getting Swept after a bad round of combat.

As I said, though, that’s not the only use for a Destroyer Lord- for a few points more, they can do nearly everything that an Overlord can do and then some. By running them in a similar configuration, we can make the same use of their melee prowess to ward off anyone who might have thoughts about getting into assault with our hordes of robit skeletons- however, even prior to that the Destroyer Lord will already be providing his Preferred Enemy bonus to the unit, improving the effectiveness of their shooting by a noticeable chunk. If you’re not running a Decurion, he is most always a superior choice in this respect.

Of course, in a Decurion there’s another way to get the Destroyer Lord- namely, the Destroyer Cult. He is actually surprisingly awkward in this respect, as standard Destroyers already have Preferred Enemy and thus do not really benefit from his joining up with them. This is why, ideally, you have some other unit for him to join to such that his usefulness is maximized- he still is often a bit of a “tax” in cases like these, but we can minimize that tax as much as possible (and every once in a while he will be absolutely golden.)

However, despite their combat prowess a Destroyer Lord is not invincible. Even with maximized upgrades, they will still often lose fights to top-tier combatants in the game (Chapter Smasher, Draigo, Knight Warlords, etc.) In particular, anything that causes Instant Death or multiple wounds can be very hazardous for a Destroyer Lord; they can get the 4++, but you really don’t want to be stuck in the position of failing a single save and watching your HQ disappear. Destroyer Lords are actually a bit of bullies, as they prefer to be kicking in the teeth of weaker characters, whom they can dispatch with relative ease while the rest of their squad plays cleanup. If something really dangerous comes knocking, make use of that mobility and get the heck out of dodge!

Despite my lack of focus on it so far, a Destroyer Lord’s mobility is one of their biggest advantages. Most Necrons are slow, slow, slow and so having a HQ that can not only cross the field with relative speed, but also be a strong fighter and support element while doing it is quite the nice little surprise. Speed is one of the two most critical elements on a melee unit of any kind, along with survivability, and the Destroyer Lord has both. Use that to engage the targets you want, not the targets your opponent tries to present to you and never be afraid to maneuver to force the enemy into bad decisions; sometimes wrecking your opponent’s plan and putting them on the back foot is just as good as killing their units. A squad of Wraiths with a Destroyer Lord mixed in can look absolutely insurmountable to many players and cause them to panic and make bad decisions; often enough, this will win you the game on its own as their strategy disintegrates and they compound mistakes on mistakes. Take advantage of this element of threat, but remember that cooler (and more experienced) players probably will not fall for it- they will know what your unit can do and how to handle it.

Destroyer Lords are fast and versatile units that will often be a prime HQ choice when you actually do have the choice to take them- though obviously this won’t be so in a Decurion, which is one of the most common Necron setups. However, they’re more than just relentlessly-aggressive characters, so always keep in mind what enemy you’re facing and what you need- will sending them forward actually make a difference against the enemy, or is it just a waste? Will adopting a more defensive pose with your HQ benefit you more, such as against Deep Strikers or late-game objective grabbers? The Destroyer Lord has plenty of potential uses, so don’t lock yourself into thinking of him as only being capable of one thing.