Hello there, and welcome once again to the codex review series. This time around we have the Necron Cryptek up on the table for analysis. As always, you can find more reviews and tactics at the Tactics Corner.

The Necron Cryptek has changed quite a bit since 5th Edition; whereas before they were essentially the “heavy weapons” troopers of squads, bringing a variety of types of additional firepower to units, now they are a for-reals HQ model that buffs their companions with different pieces of unique wargear. Though they lack the hitting power of a Lord or Overlord, the utility they provide can be critical to an army and as the cheapest (useful) HQ option they may often get the nod on that basis alone. However, for those willing to invest they can have a lot more to offer as well. 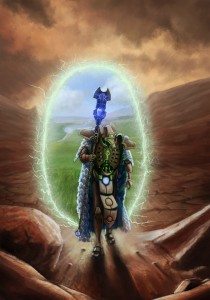 Crypteks, as with most Necrons, come with a pretty short list of rules and gear to start with. They are Independent Characters and can thus link up with whatever squad as needed and have Reanimation Protocols, giving them one last chance to shrug off every wound taken. Their standout feature in the rules department is the Technomancer rule- all models in their unit (including themselves) add +1 to Reanimation rolls, though this is still capped at the usual 4+ roll. This, then, is the major function of the Cryptek- he makes his squad tougher to a pretty noticeable degree.

The Cryptek’s statline itself is a bit unimpressive; 4s across the board (but with W2 and I2 as is standard for Necron characters) and only a single Attack mean that they are most definitely not wanting to get into a fight despite Character status. Worse yet, they have only a 4+ armor save, making them potentially very vulnerable compared to more doughty companions; you’re going to make liberal use of Look Out, Sir! in order to keep them alive and kicking. A Staff of Light comes standard for them (12″ S5 AP3 Assault 3), giving them a modicum of shooting power in a pinch.

The Cryptek’s upgrade options are where they really begin to shine, however. They can’t get a Warscythe or Resurrection Orb- the former of which is understandable but the latter seems a bit of an odd choice. Aside from that, however, they have access to all of the relics and special upgrades in the book as well as a unique one, and they are in fact uniquely well-suited to carrying many of them.

The Technoarcana choices are mostly poor choices for Crypteks, as they are intended to enhance the survivability of a model. With only two wounds and no desire to get into a challenge (where such upgrades will matter most), spending 25pts for a 4++ or 15pts for IWND is not exactly exciting for our little repair master. However, we do have access to one very nice choice that the more-fighty characters can’t get- the Chronometron. For 25pts, we can give everyone in our unit a 5++ save against all shooting attacks- and in the era of Ignores Cover this can be a pretty handy thing to have around. Since it costs the same as a Phase Shifter and affects the whole unit rather than just one model, it is an option that we will often look to, points permitting, most especially for units on foot.

The Artefacts list also has several prime choices for us; though other characters can get any of them as well, since the Cryptek is innately a support character, it makes more sense for them to be carrying support-oriented gear in addition. Being cheaper than the other characters also helps, since it drops the functional investment we have to take in order to get access to such upgrades. In particular, the Solar Staff (which can force all enemies to Snap Shot at our unit for a turn) and Veil of Darkness (one-time Deep Strike) are particular favorites for such purposes, as they bring wholly-unique capacities to a unit. 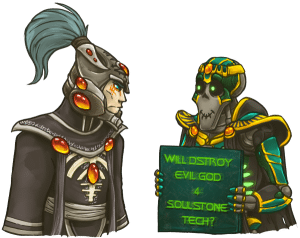 The Cryptek’s main advantage- and limiting trait- is his ability to get us a 4+ RP roll, but no better than that. As I talked about in my article on Necron special rules, the difference between a 5+ and 4+ RP roll is absolutely huge, since you’re essentially shrugging off half again as many wounds as you otherwise would. So in Combined Arms armies of Necrons, or in other detachments that aren’t getting the Decurion bonus, having a Cryptek around is a very, very handy thing to have.

Contrawise, in a Decurion a Cryptek does very little for us- he lets us keep our max-bonus RP roll even against Instant Death weapons, but such attacks are typically few and far between in most armies, so we hardly need concern ourselves with that all of the time. Moreover, the only way to access him is via a Royal Court, which demands a large investment into HQs that we often would rather not pay- two Overlords and a Lord is a pretty steep tax for a pretty limited bonus.

In fact, the two named Crypteks (Szeras and Orikan) both have some very major bonuses for their armies for a relatively-small additional investment, which puts the Cryptek’s role of simply making one unit tougher in danger. Szeras can potentially affect multiple units at once and comes with a superior statline and gun; Orikan makes one unit really tough and turns into a combat monster late in the game. In the face of such competition, the lonely ol’ basic Cryptek seems like he’d be in a pretty bad position, but that’s actually not true.

See, those two Artefacts mentioned earlier are actually really strong pieces of wargear and have some really good synergy with existing Necron units and strategies. The Solar Staff, when joined to a tough unit like Wraiths or Lychguard, can render them essentially immortal for a turn- and in many cases one turn is all you need. Whether racing up the field on foot (as Wraiths do), or disembarking from a transport (for Lychguard), the one turn of Invisibility can be enough to seal the deal against a lot of armies, putting your deadly melee unit in position to get off a charge and start wreaking havoc. The Staff is also great for reserve strategies- with flyers, Deep Strikers, etc, hiding off the field, having a Cryptek and unit hide somewhere on the table and pop off the Staff on the first turn makes tabling you- even when you only have 6-12 models on the field- very, very hard to do, allowing a brutal “beta strike” when all of your units arrive next turn.

The Veil of Darkness has some similar shenanigans- by allowing you to teleport across the field once, even when locked in combat, the Veil is not only a great delivery tool for a combat squad, it also is a great escape tool when facing a more-aggressive army.  Being able to Deep Strike any time you want is actually a very useful trick- it can get you in the enemy’s face, of course, but if saved for later in the game it can deliver you to an objective. Unfortunately Necrons have no way to mitigate scatter on Deep Strikes, so you have to be a lot more conservative with it than some other factions, but it is still a very powerful tool that lets you cross the board in a single turn if the need arises. Note that, unlike the previous codex, it cannot be used from reserve- though it does grant the Deep Strike rule on its own, allowing the Cryptek to accompany a squad that could otherwise do so (Jump/Jet Pack Infantry, Flayed Ones, etc.)

If you’re looking to use a basic Cryptek, you usually will be joining them to a fairly high-value squad in your army. As often as not, this will actually just be basic Warriors- since the Cryptek’s bonus applies to the whole unit, it naturally benefits you to maximize the size of the unit they join, and Warriors are as large as any unit in the codex can be. However, it can also be useful to join them to a particularly-expensive choice from another slot, such as Lychguard- you’re still getting effectively the same total “price benefit,” since Lychguard are twice as expensive as Warriors even though they have half the squad size. In either case, they are a prime candidate for the Solar Staff to give you an additional layer of protection.

Though a cheap utility character, unlike the Librarian and similar choices in other books the Cryptek tends to have a bit more of a specialized role and so won’t be seen quite as ubiquitously- though it doesn’t help that it can easily be overshadowed by its named brethren. However, this shouldn’t be taken as an indication that Crypteks are weak- indeed, several powerful tournament lists end up relying on the Cryptek for do work for them and there are lots of ways to integrate one into an army. The key is being able to take proper advantage of the +1 RP rolls and make use of his access to artefacts and other special wargear; without this, a Cryptek is not going to be at all impressive in its functionality.