The Horus Heresy and You – the beginner’s guide!

You are here: Home › 30K › Editorial › The Horus Heresy and You – the beginner’s guide! 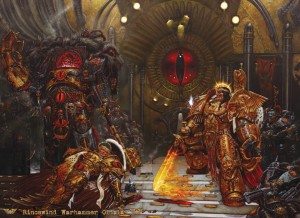 Hi guys, it’s Dan here checking-in all the way from the United Kingdom; birthplace of Shakespeare, Harry Potter and most importantly – Warhammer!

Warhammer 40k is currently the most popular table-top wargame, and for good reason! The miniatures are fantastic, the lore is fascinating, complex and enjoyable, and the rules are….. fun? Yes, we are all too aware of the shortcomings of Games Workshop’s creation but we can still admit that the game is thrilling in all the right ways. It also scales incredibly well; from small games of infantry exchanging fire between the ruins of an abandoned city to large battles involving battalions of tanks, giant robots and flyers that make the regular gaming table feel small.

A lot of us invest in armies because of the way they play, but the looks of an army and the lore are the things that keep us coming back even when the game lets us down, after all – we all remember the first time we faced Tau in 6th edition and our armies were blown off the table before we had a chance to even advance.

So what if I told you that there is a spin off from Warhammer 40k that is both different and very familiar? A system where the rules are much more closely tied to the lore and where the power creep we experience from codex to codex is not something that burdens us. A game that is more regimented and controlled, yet still diverse enough to be rewarding and stimulating?  That game is Warhammer 30k: The Horus Heresy. 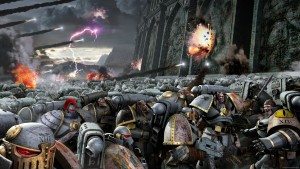 The setting is one of the greatest appeals. The Age of Darkness where Gods strolled across battlefields and the new Imperium conquered everything in it’s path; The time of the Emperor and his Legions. It’s the time of a great betrayal that would plunge the universe in to darkness, ignorance and superstition. I think we can all get behind that!

Traditionally the Horus Heresy has been reserves for the die-hard enthusiasts. The cost barrier is absolutely massive. A fully kitted Tactical Squad in Heresy Era armour from forgeworld can sometimes set you back over £90 ($130+)! Not to mention the difficulty involved in actually building the models. Dealing with resin can be tricky, and the kits are prone to defects or require clean ups that can be daunting for the uninitiated.

The good news is that the two main stumbling blocks are being addresses with the latest release from Games Workshop:  “Betrayal at Calth.” The board game looks like it could be fun, but it’s clear that the main pull is the ability to use the models in both 30 and 40k.

One of these boxsets literally provides you with all of the basic infantry you need to start a Heresy army. It also comes with two characters who are actually useful in the full game.

Forgeworld prices for their various vehicles are a lot more reasonable than their infantry costs, and the models are actually quite easy to put together. Things like the Sicaran and Deredeo Dreadnought can be assembled easily in an afternoon, and aren’t difficult to paint or prep.

One thing that no one is talking about it the ability to use the multitudes of vehicles in our existing 40k collections that could make the jump to the Heresy setting. Every Rhino, Whirlwind and Vindicator can be used without a problem, same with Predators (can’t use the Destructor variant) and Landraiders (No Crusader or Redeemer). The vehicles of the 40k Marine armies are Mars pattern designs that actually existed during the events of the Horus Heresy. For the first time, collecting a Heresy army doesn’t have to involve bank robbery or wallet burning. The basics of your army can be collected relatively cheaply, and a few additional purchases from Forgeworld, such as some of the more exotic vehicles or a Primarch can be used to flesh out your force. 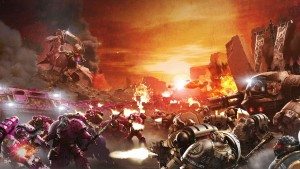 There are a few other expenses that can be minimised. It’s ideal if you pick a Legion ahead of starting your collection. Most of them have rules at this point, but Forgeworld hasn’t got around to them all yet – The Blood Angels, Dark Angels, Space Wolves and Thousand Sons are due to receive rules in future updates, but aren’t represented at the moment. The Ultramarines are featured in “HH book V: Tempest,” alongside the latest rules for the Word Bearers. All of the other Legion specific units and rules can be found in the Istavaan Campaign Legions Red Book.  As for all the generic units and vehicles that are shared amongst the Legions – those are found in the Legion Crusade Army List. You don’t need all the books to play of course, only those that are relevant to the Legion you want to collect. There are more in depth tomes you can buy that will flesh out the stories and fluff, but the following books will provide you with all the rules you’ll need to build up a force and start playing whilst keeping the costs down.

Here’s a link to the various essential books:

Now let me briefly talk about the game itself: Is it a perfectly balances masterpiece? Absolutely not. It is, however, much more sensible than what 40k has become in recent times. There are strict limitations on Lords of War that prevent abuse. Super friends style combinations that lead to indestructible death-stars are not viable thanks to a more regimented allies matrix in addition to the game making it harder to spam psychic powers (unless you play Word Bearers). 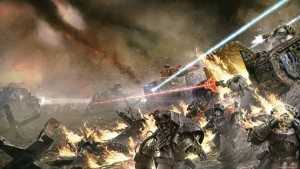 In games of the Horus Heresy, putting Terminators in an Assault Vehicle can still work! There are limitations on how an army is built that prevents certain combinations of units in conjunction with Alpha Strike elements and so on. Although units aren’t completely balanced, you generally won’t get a situation where a player is completely decimated in one turn – a distinct possibility in 40k outside of a controlled environment. 30k needs very little, if any alteration to its rules to function in such a way as to create good games between fresh opponents.

Players might worry that in an environment built around the Imperium civil war that mostly focuses on Marines, things might be stale. In truth the flavour of each Legion and their unique methods of building a list are incredibly varied and true to the lore. It’s an incredibly rewarding experience, and it’s one I hope more people will share in the future! I don’t imagine it will reach the same popularity as regular 40k due to the omission of the various Xenos factions, but I believe a case can be made in the future to include races like the Orks, with modified rules that could fit the setting. Anyways, that’s all for now – Good luck!

8 Responses to “The Horus Heresy and You – the beginner’s guide!”