This time around we’re taking aim at the feature of the Necron codex that revolutionized how lists were built in 7th Edition- the Decurion detachment, variants on which have been a defining feature of all of the codices since it. Click to read on, or check out the Tactics Corner for more reviews and strategies. 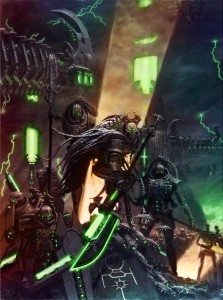 The Necron codex can, for a lot of purposes, be considered the first “real” 7th Edition book. The codices that preceded it (Orks, DE, GK, SW, BA) were all a bit half-baked in their own ways and relied heavily on copy-pasting the 6E versions of their books while also leaning on a supplement to make them functional. Not so Necrons, who saw major updates and changes from their previous version and did not have a specialized supplement released following on their heels; instead, it saw a much better-balanced set of units included and a new style of combi-formation replacing the previously-used “unique detachments” such as the Company of the Great Wolf, Baal Strike Force, Ork Horde, etc.

The Necron Decurion was different in that it had “slots” that consisted of formations (or, for a handful of choices, a specific combination of one or two units that was not a formation) rather than individual units. Its “troops” were the so-called Core formation and then Auxiliary choices replaced the old FA/HS/EL slots, with Command choices functioning something like non-mandatory HQs. Although a little confusing at a first glance, it’s actually easier than it seems.

The Decurion Detachment, like most formations, are relatively strict; however, it also comes with a lot of consequent benefits as well, so we’re well compensated for our troubles. We MUST take at least one of the Core formation (a Reclamation Legion) as well as at least one Auxiliary formations/choices, with the option to take more of either and some Command choices as well. Note that virtually all of the choices within the Decurion have bonuses of their own that apply in addition to the generic Command Benefits that apply to all models contained within a Decurion- we won’t be talking much about those here, but it’s always good to keep in mind for when you’re reading the individual subsections.

The actual bonus for the Decurion are very simple and easy to underestimate- indeed, I myself did so when I first read through it. All models in it that have the Reanimation Protocols rule add +1 to their rolls (which normally brings them to a 4+, the maximum attainable) and any vehicles with the Living Metal rule ignore Crew Stunned in addition to Crew Shaken results.

As I said, this doesn’t seem like much, does it? 5+ to a 4+ is, seemingly, a fairly small change. However, look at it from a different perspective: that meager +1 to your roll means that you will be negating wounds half again as often compared to a model without it. The difference is even more pronounced for Instant Death wounds: rather than passing them on a 6+ (i.e. essentially never) you’re doing so on a 5+ (unreliable, but sometimes comes through.) Just as importantly, it does on an army-wide basis without any need for characters, auras, or anything else; your guys are just tougher, end of story. Without the Decurion, Necrons can get the bonus only on a limited, unit-by-unit basis by purchasing Crypteks and whatnot.

The implication here is enormous: the Decurion is tough to kill. REALLY tough, and since nonvehicle models by far get the better of the two bonuses (as Crew Stunned is a relatively rare result and you’ll still lose the Hull Point regardless), it wants to focus on models that have (or can gain) the Reanimation Protocols rule and make maximum use of it. 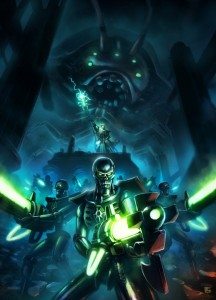 Okay, but what do you do with that? What can you take in it? Well, due to the fact that is it, in fact, a formation the Decurion’s choices are shaped heavily by the units you can take as part of it (and in which combinations.) We won’t always be able to take exactly the things we want to, and in particular Forge World models are entirely beyond our reach. But let’s take a look at the choices we do have:

So, just at a first glance, we can say that the Judicator Battalion, Destroyer Cult, Canoptek Harvest, Flayed Ones, and Deathmarks all have some potential, as they are all predominantly composed of infantry who can benefit from the Decurion’s major bonus. Examining tournament lists quickly bears this result out: the Destroyer Cult and Canoptek Harvest are both extremely common in high-level Necron lists and especially in Decurions.

The Decurion isn’t without its problems, however- and most notable amongst them is its lack of Objective Secured as a bonus anywhere within its ranks. While its troops may be extremely difficult to kill, it’s not hard for enemies to steal objectives out from under them at the end of the game and leave them flat-footed. This is particularly relevant because of the presence of the Night Scythe, which is a wonderful way to deliver some models to a pinpoint location exactly when you need them- but if getting them there isn’t good enough by itself, then your strategy starts to fall apart.

The Decurion is thus fairly well-balanced against a simple Combined Arms detachment or other options, since it comes with a built-in weakness. For Necron generals that want to play an implacable horde that cannot be stopped, it is an excellent option- but hardly the only one, as the book is full of excellent options that can be used in a variety of ways. Necrons set the tone for the successful books of 7th edition and the Decurion was a big part of why; it showed GW how to make a flavorful and effective army in one and in a way that didn’t require jumping through extensive hoops. It’s little surprise that every single book since has followed in its footsteps.

← LVO Exhibitor Profile: Ninja Division
Da Boyz GT 2015 Retrospective Part 2 – THERE CAN BE ONLY ONE (The Singles) →