GV Color on Age of Sigmar!

Gamer Gregory V. brings us his perspective on Age of Sigmar!

Games Workshop’s (GW), Warhammer Fantasy has always held my attention because the models were just too cool. Wood Elves, Skaven, Lizardmen, Tombkings… the list would pretty much be the whole product line! Yet, time-after-time I would pick up a rule book or watch a game and would say, “No, don’t think so” due to the rules and how the game was played. When Age of Sigmar (AoS) hit, my first impression was how fantastic the new models looked, but totally negative raging over the internet made me skeptical to say the least. Not to mention the proven track record of GW doing crazy things to rules — I felt my apprehension to the game was at least warranted.  When Frontline cracked a box of AoS open and we started to give it a go, the game was fun though some rules we agreed were not to our taste. For example, rolling for initiative each turn – that’s a rule that we did not care for after some initial games. Going second at the bottom of a turn and then losing the initiative roll and going second on the top of the next turn was just not fun. As things developed it was agreed we’d start by playing with fifty points of wounds and a limit of two heroes, wizards, war machines, and monsters.  Fifty wounds used up a good amount of the AoS starter set and allowed us to get some shorter games in at a lower price as we built up our armies.  The new models for Stormcast Eternals and Khorne are just crazy cool models. In fact every model released for Fantasy/AoS over the past year has been pushed to a new level. On the 40K side, I had a detachment of Plague Drones and Plague Bearers with a Herald, so wanting to get the ball rolling and save some money, I decided to round out a Nurgle faction. When it comes to Nurgle, the models released over the last few years rock. In fact when Plague Drones were released I bought them just because they looked so damn cool. After looking over the rules for Plague Drones in AoS I thought “Hmm, these look good… very good :)”

As we’ve gotten more games in, I’ve learned a little more about playing Nurgle in AoS and thought I would pass on some observations. One aspect that Nurgle brings is resilience and toughness, a number of models have the Disgustingly Resilient special rule, which is a 5+ additional save after your saving throw. What makes this so good is that it limits the damage for not only regular wounds, but for Mortal Wounds. In AoS you do not get a saving throw against Mortal Wounds, but with Disgustingly Resilient, you do – Awesome! So, what follows is a run down on what I’ve been using for our fifty- to sixty-wound games and a few comments regarding the models. 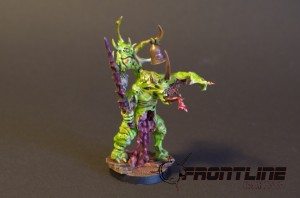 A decent five wound model that has both Disgustingly Resilient and it heals wounds when nearby units are wiped out… got to love them daemons! 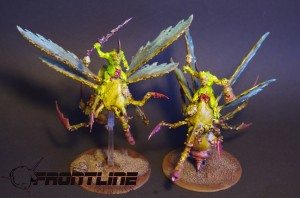 I love these models, they look cool, are fast, have multiple wounds, and are tough. They have a 4+ save and a re-roll of 5+ thanks to the Disgustingly Resilient special rule. Furthermore, you can summon more of them if you have a wizard in your army. They also take up real-estate on the table and you can use this to your advantage. There is really nothing you can complain about with these nasty bugs –  they have a ranged attack, do work in melee and keep on moving. 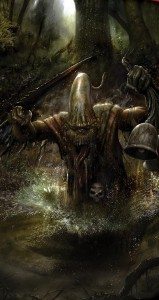 One wound soldiers of plague, we all know the awesome models with their guts pouring out. In AoS they are certainly not an OP choice but they put out the damage. Their awesome stat? Well like the Plague Drones they have the Disgustingly Resilient special rule and gain the re-roll against all wounds – nice! 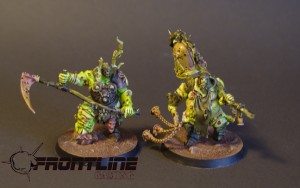 The kings are bitchin’ models! One of the big frustrations for me with this kit is it builds five models but each figure has numerous options for weapons, heads and plague-ridden guts – making it tough to pick how you want to build them. For my starting fifty wounds, five was going to be enough, but as we ramp up to one-hundred wounds I’m looking forward to adding five more. The Blight Kings are just a hell of a lot of fun to build and get painted up! In use these guys have done some real work, three wounds each, they don’t get the resilience re-roll, but they hang tough and do damage. 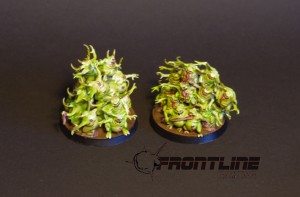 Nurgings are four wound models that dish out a lot of ineffective attacks: 5+ to hit, 5+ to wound, 1 damage. That said they are resilient in that each model must be eliminated that turn or it generates all of its wounds back! We’ve seen this to be useful in a large unit, to surround a friendly wizard and keep him from a melee attack, or to tar-pit a unit. A unit that cannot dish out numerous wounds will have a difficult time killing Nurglings. 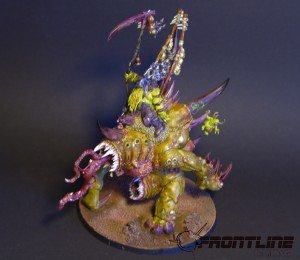 Man this is a great looking model! I really can’t say anything negative in regards to the price – sure it would be nice if it cost less – but in no way did I feel slighted on spending my dollars on such an amazing model. Of course it also helped that I took advantage of a Frontline Gamings 25% pre-release discounted price – he-he! Building the Maggoth Lord, was not difficult but it did take some time. Any of you who have built some of the new, larger models from GW will know this – be it the Bloodthirster, Drahzar, or the new Tau Ghostkeel. The main body of the Maggoth Lord is a multi-piece main body, in true GW fashion fit is excellent.  One of the facets of this model is that it builds three different models, each with it’s own stats. Having not played the model I wasn’t sure exactly which would be the best build. The melee attacks are similar in damage, but the Orghott’s Daemonspew has a nice 18-inch ranged attack that dishes out 2D6 damage. Morbidex Twiceborn is a Nurgle spawning nasty and, Bloab Rotspawned has both a nice 12” ranged attack and the Miasma of Pestilence spell. So, I approached building the Maggoth Lord by taking the coolest looking options and used magnets. For the rider I picked the character I liked the appearance of the most, Bloab Rotspawned. However, the main mouth of the Maggoth and each tongue got a magnet, and this would indicate which model it was representing on the table top.  Playing the Maggoth. Hmm, I have to say as a big imposing creature on the table the Maggoth Lord drew attacks. Right away I found that although it has twelve wounds, Stormcast Paladin Protectors totally wrecked face on him. I was initially let down playing the Maggoth Lord because although it was a twelve wound model, it was not resilient. Unlike a number of other units in the faction that can regenerate wounds the Maggoth Lord cannot. In subsequent games I’ve used it as a second-hitter, and in a defensive posture while it summons units or casts spells. 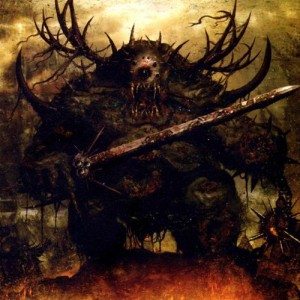 The Great Unclean One

On looking over the other models available for Nurgle, I have to say The Great Unclean One is impressive. A hero, and a wizard, with only seven wounds compared to a Maggoth Lords twelve – Mr. Unclean heals D3 wounds a turn! Is there’s a downside… well the GW model could be better, it is not up to their current standard. The Forgeworld model is nice, but of course it’s a little pricey, and I just don’t see it as a “Wow!” model. As I build this army out, dealing damage is certainly a major focus for me, but models that are resilient are at the top of my list… The Great Unclean One does both. 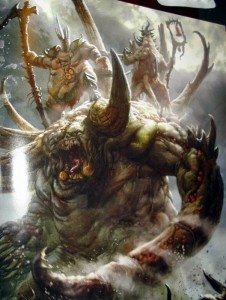 With eighteen wounds what’s not to like except that your friends will rage-quit on you! The Glottkin dishes out attacks and regenerates D3 wounds a turn. I haven’t put one into action yet, but the consideration as with any large model is the wounds cost and if those wounds (or points) would be better spent on a number of lesser units? With the Glottkin I believe the points cost to be well worth what he can do. A ranged attack that can dish out 2D6 wounds from vomit, three hard hitting attacks in melee and wound regeneration, the Glottkin is ferocious. Now obviously if you’re playing with a group that has made it’s own house rules on army composition, that will dictate your decision to take this beast. 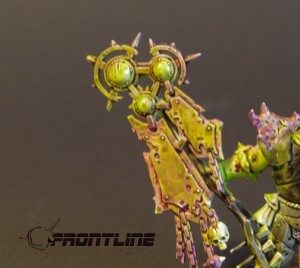 Banners and Bells and Summoning

Plague Drones, Plague Bbearers and Putrid BlightKings all have the option of carrying those unit buffing Banners and Bells. Besides looking cool these items buff attributes like adding one to Charge or Bravery rolls, re-rolls on Battle-Shock tests and instantly summoning in more Nurgle models. Plague Drones and The Great Unclean One are just a few of the models that can be summoned on to the table top!

Well Stormcast Paladins do serious work on Monsters of the Nurgle faction. Ouch! And, yeah don’t even talk to me about Head-Honcho Celesant-Prime. Give me some tactics for sending him and his damn meteor and hammer back to his realm of Order. Although I have allied with Skaven, I really don’t want to be on the receiving end of a Storm Lightening Cannon much less a Rattling Gun! What will the upcoming release of Lizardmen throw into the world of AoS? And, what further madness will GW throw through a Realm Gate? Well, there is no doubt that some extraordinary models are coming down the pipe! Beyond that all I can say is, “Keep me Disgustingly Resilient baby!”

As we play more games of AoS, I have to say it’s enjoyable game. The rules are simple, but the abilities of each unit type are varied and I’m having a good time learning to use models more effectively through their synergy and individual rules. The books released to date are beautiful, filled with fluff, warscrolls and some fun battleplans. For me, it’s refreshing to be able to look over the models I have, spin my brain on what they do, add up the number of wounds in my head (our “points” system) and get a game in.  At the same time, imagine a game of four friends, each with a different faction and in which allies can change each turn by a dice roll! Crazy fun and laughter, and I think a real test to see who can come out on top. For me epic moments are what really make a game fun — like smashing a Dragon Slayer with my Maggoth Lord only to have the Dragon Slayer roll his Epic Death Blow for six wounds with just six wounds left on the Maggoth – haha – can’t get any more fun that that! AoS is fun, cinematic and a game I am greatly enjoying it.

Let us hear about the different ways you and your friends are playing Age of Sigmar and the different house rules you’ve been using to bring a bit of balance to the game?

Posted on November 5, 2015 by Jason in Age of Sigmar, Tactics, Uncategorized

12 Responses to “GV Color on Age of Sigmar!”

Leave a Reply to gv