You are here: Home › 40K › Rawdogger Ascendant or My Battle Company Journey

Rawdogger here to talk about coming to the realization that playing competitive 40k on hard-mode is starting to get really old, really fast.  Going to tournament after tournament and consistently losing game after game has finally lost its luster and much like Detective Murtaugh I’m getting to old for that shit.  For the longest time I’ve had a strange mindset when it came to making lists for 40k.  I would try my best to make terrible lists from terrible codices work in order to prove to people that you didn’t have to run a power list to be successful in the competitive environment.  Well, the only thing I proved time after time is that the lists I was writing were indeed terrible.  To be able to compete at a competitive level with Warhammer 40k in its current form, especially the ITC format, there are some things that you absolutely HAVE to have in your list.

Mobility – The king of 40k 7th edition is fast moving units that can reach out and grab objectives turn after turn.  If those units happen to be objective secured that is even better.  One of my biggest issues in past list building has been my preference for non-mobile shooty units that would sit back the entire game.

Target Saturation – You want to overwhelm your opponent’s ability to completely eliminate your army.

Grav Weaponry – Even more crucial with the Tau codex being released in a couple weeks.  Grav is the undisputed terror of the battlefield.

Drop Melta – Melta has been overshadowed by Grav in recent times but if you go against 5 Knights you damn well better be able to produce some major melta up they ass or have an un-killable deathstar that can walk up and punch them to death.

When looking at all four of the requirements necessary to taking on the 40k lists likely to be seen at tournaments, it became pretty clear not only WHY I was consistently losing at these events but also what the ultimate list is to be able to actually compete at them.

I know.  I KNOW.  I never saw myself even considering taking a list like the Space Marine Battle Company.  I even felt bad typing out that sentence.   Free points is something that I feel is driven by the GW marketing team and is not good for the overall health of the game.  However, the power and durability of the Battle Company can’t be denied and when it gets down to it, the Battle Company shores up a LOT of what normally loses me the game.    The ability to take a pounding from the enemy and still have the bodies to win the day is something of a new concept for me.  One of my main issues in competitive 40k is that I have a tendency to put all my points into a very small amount of units and as soon as those units start evaporating I’m pretty much out of the game.  With the Battle Company, there are so many units that all do pretty much the same thing that losing even half of your force by mid-game is not all that bad. 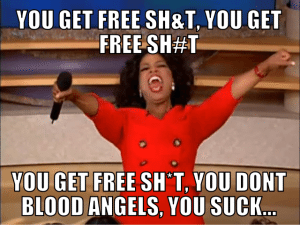 OUR RHINOS WILL BLOT OUT THE SUN.

Another benefit for me and running Battle Company is the ability to re-roll most of my shooting dice throughout 3 turns of play.  For someone who is going against the Battle Company this sounds like a nightmare but for someone who rolls as consistently poorly as I do (which has been documented!) this really appeals to me.  The last reason Battle Company really appeals to me is the fact that I own MOST of the models already that are needed to create my list.  Who doesn’t already have a bunch of Space Marines, Rhinos, and drop pods collecting dust in shoe boxes?  Anyways, the list below is the list I plan on creating over the next couple months as we get closer to the two GT sized events I will be attending in 2016 TSHFT in Seattle and Adepticon in Chicago.  There will likely be many small RT sized events leading up to those GTs and I just so happen to live in an area of California that has tons of very good competitive type 40k players in which to try this out against and get feedback on my tactics.  Let me know what you think of the list in the comments and any ideas to make it better.

← New Tau, Get In My Belly!
Daily Awesome Conversion →

43 Responses to “Rawdogger Ascendant or My Battle Company Journey”