Hey everyone, here are the results from the poll!

This vote went fairly predictably, IMO. The only question I felt really uncertain about the outcome was the question to count Dark Angels, Blood Angels and Space Wolves as having Chapter Tactics as they essentially do. It was a very close vote, but the community decided to maintain the status quo.

Should we treat Space Wolves, Blood Angels and Dark Angels as having Chapter Tactics? 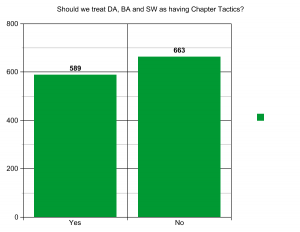 So, your super friends are safe and sound. I would have preferred to take a notch out of Deathstars as in my opinion they are bad for the game, but, in this specific instance, I was in the minority. Compromise is what the ITC is about, and so I will compromise on this topic as others must on other topics.

The next one was cause for a bit of a stir, as all rules issues tend to do.

The new Tau Gargantuan Creature, the Stormsurge, can be taken in units of 1-3. Currently in the ITC, we only allow a single Lord of War to be taken. Should we make an exception to the rule for the Tau Stormsurge and allow it to be fielded as a unit? 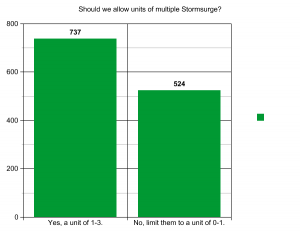 So Tau players, feel free to bust out a unit of the new Stormsurge! I think a unit of 1 will still be the most popular, but 2 may be good. Time will tell.

The question I was most invested in personally, was to allow the use of Experimental Forge World rules or not. I really wanted to see this pass as it opens up a lot of fun options such as Chaos Knights which folks have been asking for for ages, and the poor Tau suits that have lingered in limbo for years such as the R’Varna. It’s a good day to be a Tau player!

Should we allow “Experimental” Forge World rules in the ITC? 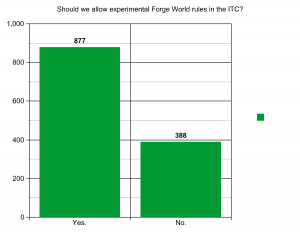 So there you have it! By a huge margin, Experimental rules are good to go, and they are also really easy to find as they are all available for download on FW’s site.

Thank you to all who voted and continue to contribute to the ITC being what it is.

Leave a Reply to Benjamin