Dispatches from the Front – Know No Mercy Tournament Report

You are here: Home › Uncategorized › Dispatches from the Front – Know No Mercy Tournament Report

Rawdogger here to talk about the Know No Mercy event that I attended this past weekend at Great Escape Games in Sacramento, California.

This tournament was a two day 6 round tournament and I believe the first GT event that has been run at that particular store in around 10 years so I am happy I got a chance to head up with my buds Frankie and Dan for the weekend.  The format for the event would be unique in that it would be basically combining the ITC and NOVA formats with a sprinkling of big book missions thrown in just for fun.  While the ITC FAQ would be used it was modified to the preference of the tournament organizer Peter Kelly to reflect the way he prefers to play the game, which is about as close to unmodified 40k as you are likely to see anywhere.  While this is not my personal favorite way to play 40k I wanted to give it a shot and see how I fared against the worst unmodified 40k had to throw at me, so I packed up my Catachans and the Stormlord superheavy tank nicknamed ‘Belligerence” and headed off to Sacramento. 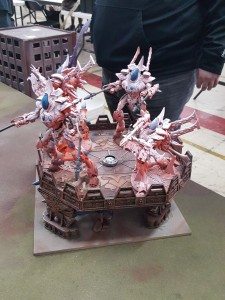 Well, let me say that the first thing I saw when I walked into the warehouse that serves as the store’s tournament space were two display boards.  On the first board stood five Imperial Knights and on the other stood five Wraithknights.  Oh boy.  As I walked past these display boards I thought to myself that there couldn’t possibly be anything worse than what I had just seen.  That is when I saw the Warhound Titan.  I’m not going to lie.  Seeing these armies really bummed me out.  I had put together what I thought was a decent take all comers army and the first armies I saw I could do little to no damage against.  D’OH!  Oh well I came all the way up to Sacramento to have some fun and fun I would have, damnit!  Before we get into my games on day one let’s do a quick recap of what I brought.

So my first game would be a kill points mission, which is REALLY good for my list.  Unfortunately for my opponent, Julio, he had the list that my army was built to go against.  I castled up in a corner with Coteaz and Veterans keeping his drop-poding melta and grav 12” away from Belligerence and outside the safe confines of the void shield.  Julio did his best to wrack up as many kill points as he could but by turn 3 we had stopped counting how many kill points I was up by.  Julio is a great player and routinely does well against top opponents all over the country so I felt really bad about taking him out of the running for the second day (I had a major victory against him) but in the end I couldn’t feel TOO bad about winning against an army that had 300+ more points than me at the beginning of the game.

So remember the five Knight army I saw when I walked into the hall and though ‘man if I have to go against that it will be a quick game’?  Well, guess who I drew next?  Not only was Ben running five WS and BS 5 Imperial Knights but he is also a REALLY good player so I knew I was in trouble.  The game was a NOVA mission that revolved around taking and holding objectives that were worth varying amounts of points.  The player that wracked up the most points by the end of the game wins.  I only had a set amount of units that could put a dent in Ben’s army and they had to all be hitting and taking off hull points if I even had a prayer of pulling this game off.  Boy was I fucked.  Ben predictably ran 4 out of 5 Knights directly at my battle line with his armor 13 facing me and ion shields on point.  In the end I took out one Knight and scratched the paint off of a couple more.

Adrien is a regular in our shop in Martinez so I was pretty happy to be playing against a familiar face while playing a familiar ITC mission.  Daemons are any army that I always underestimate.  On paper the amount of firepower I can put out per turn should take them to task pretty quickly, but I always forget how damn hard it is to actually take out Daemon units.  I seized on Adrian and we must have both thought ‘well this will be a quick game’.  The only unit within range of my battle line was a Plaguedrone unit with two Heralds in it.  Unfortunately for me they were in cover.  I shot 2x Wyverns at them, 30 S6 AP3 shots, 5x Lascannon shots, 12x Autocannon shots, and 3x Heavy Bolter shots into the unit and killed 2 Plaguedrones and put a wound on a Herald.  OH SHIT.  That last sentence basically summed up how the rest of the game went.  I would shoot obscene amounts of firepower into the Daemon units which would either shrug it off or I would thin them down to a couple models and then they would proceed to summon another unit.  I must have killed 700 additional points of Daemons throughout the game.  In the end we tied on the primary and Adrian beat me on the secondary and I think we may have tied on the tertiary.

So after day one I was sitting pretty with a 1-2 record which took me out of the main GT so the following day I would have to play in the lesser RTT. My lack of maneuverability was once again my downfall. Oh well, back to the drawing board I suppose.

A couple things I took away from the tournament.

Well that’s it.  Overall I had a good time and even though I should have been prepared for the craziness that comes with an anything goes type tournament it was worth it to make the trip and hang out with good friends.

Posted on October 8, 2015 by Jason in Uncategorized

← Why are many of the 40k assault armies not good at assaulting?
War Convocation at Know No Mercy GT →

Leave a Reply to Bigpig