Back In The Saddle With Battle Company

You are here: Home › 40K › Tactics › Back In The Saddle With Battle Company 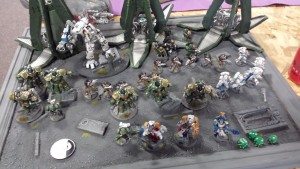 First off, sorry I’ve been away from the articleing side of things. I have excuses! First I scratched my eye really bad and the doctor had to rescratch it with tweezers…on my eye…to make it heal properly. So fun! Then I succumbed to the plague that was running through my classroom turning my kiddos into nurglings sending their puss and ooze all around the room. Thanks for all the get better emails..er wait, that was only my mom…screw you guys! Well back to business. Check out the other tactics articles in the tactics corner!

One of the things I really believe that will up your game is to play as much as you can against a diverse play field. The more games you can play against the “meta” out there, the better off you will be at a tournament. Knowing how a key unit works in a tournament or how a new army plays is key to success. 40k is a “gotcha” game where the less you know about a units special rules, an armies combo, or how an army plays can easily ruin your day.

One of the armies I’ve heard about, seen, but haven’t really played against is the Battle Co. There isn’t a lot of people playing this list in my area so games have been next to nil. My current Centstar list is an elite, low model count list that can have trouble with Objective Secured and the Battle Co has it in spades. So I decided that since I have a lot of Drop Pods, Rhinos, and Razorbacks that I should try it out myself to see how it works and I will need to do with my Centstar to take it down. I was also able to get a game in with our local Battle Company guy who was using Drop Pods. 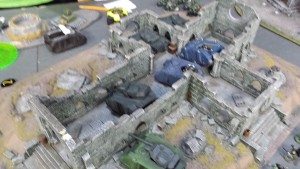 The list I was using I’ll wax over a bit as it wasn’t very optimal, using what I have. Basically it was a White Scars Battle Co with Assault Cannon Razorbacks, Grav Devastators in Rhinos, Drop Pods with Meltas, a unit of Assault Marines and Bike Marines. Khan on a bike and a Chaplain on a bike, as wellas the 10th Co Task Force with three scouts. He was running a couple of mini CSM deathstars with Nurgle bikes and Ahriman with Cypher in another squad. His list wasn’t optimal as well, but actually put out a lot of psychic firepower with Ahriman. I really felt the pain some of my opponents feel when I’m running with near 20 psychic dice to their 5.

My impressions with the Battle Co was that it didn’t really do as much as would have hoped in terms of killing things. Some of that was dice as I spent one major round shooting a Rhino and not taking it out. When I was able to get into position with the Grav Devestators they did some work, but the Assault Cannons did minimal damage and once the squads came out they were sitting ducks. I have some changes in mind that should be fun.

Lessons on Killing the Co – I think if I can kill key transports, I should be able to slow it down a lot, which should help the endgame and maelstrom objectives. 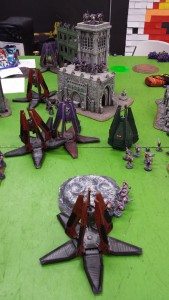 My game against the Battle Co was with Drop Pods and Ultramarines. Grav Devastators, Assault Marines, Bike Squad, Chapter Master (he learned later about the ITC rule), and Scouts. We were playing kill points, but I knew the endgame would be key. The Kill Point mission still favors the Battle Co to win as he has the edge on the Maelstrom mission and can easily win all three tertiary missions with Ground Control (hold 2 objectives), Table Quarters, and Linebreaker.

It ended up being a really close fun game with me having it on turn 5, him having it on turn 6, and me winning it on turn 7. He had a couple of bad scatters with his pods and my Locator Beacons were clutch to get me into key spots. The three objectives were scattered in a line down the middle of the table with him holding tight onto the left objective and me pushing into the middle and trying to hold the right objective. I was able to get a drop pod onto the center objective and some scouts on the right and use the rest of my force to kill the center units. It came down to the game going on and my scouts dying to allow the Centstar to kill off the models on that right objective to keep him away from Ground Control.

Lessons on Killing the Co. – Focus on what you can do, not on what you hope to do. Don’t spread yourself too thin and focus on the center of the field as you will have more options to spread out endgame and contest or win quarters or objectives. Objective placement will be important as well as you might be able to concentrate on a one portion of the battlefield to control it. Putting that one in the back corner as we often do could be a bad move against Drop Pods or scouting Transports as they can easily flood a corner and you will have to spend too much time taking it back to then have to come back to center.

Here is what I’m thinking of trying out next with the Battle Co. 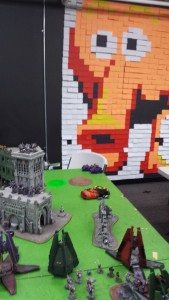 I’ve been itching to play my Knight again and this could be a fun mashup. 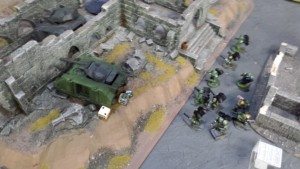 hat has worked well with your Battle Co and against said Battle Companies? Any other thoughts or strategies to take it down? Post below!

10 Responses to “Back In The Saddle With Battle Company”