Rawdogger here to talk about the latest iteration of my Astra Militarum tournament list.   I’ve been having a lot of fun trying to make the Astra Militarum work for me and fit into my play style and I must say in a game that includes fast moving 2+ re-rollable save Deathstars and 10 wound T9 Gargantuan Creatures with enough firepower to level city blocks, there is something comforting about going into a game with a fixed bayonet on my lasgun and a whispered prayer to the Emperor.  In my last showing at the Celesticon tournament in Fremont, California I had a fairly disappointing 1-2 showing, though I was able to pinpoint some key weaknesses in my army composition.  My list was suffering from most of the things that other Astra Militarum players are currently suffering from which are lack of mobility, weaknesses to psychically strong opponents, and unreliability in taking out Imperial Knights and other heavy armored vehicles.  This coming weekend and the weekend after I will be attending two back to back tournaments in which I will be able to test out the latest version of my Astra Militarum list.  Below is the list of units and descriptions of what they do for my list and what I hope they accomplish during the games. 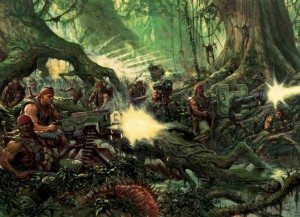 Pretty straightforward here.  I’ve added the Lascannon to the squad since I had the points and who doesn’t want a S9 AP2 48″ gun hitting on 3’s while re-rolling 1’s?  The Preferred Enemy conferred by Kurov’s Aquila means I’ll be pretty much wounding anything I hit with a toughness value and while in the comforting embrace of ‘Belligerence’ I don’t have to worry about them getting doubled out from taking wound from a S6 weapon (womp womp).  I also added the Officer of the Fleet since I am now bringing a Vendetta with a potentially crucial payload and having the ability to come in on a 2 from reserve is worth the points to me.  Now, that all depends on my ability to roll a 7 on two dice but hey it’s better than nothing.

He just do what he do, mainly keeping the infantry blob fearless and hopefully pulling off some clutch prayers if I get into combat with something nasty.  A must take if you are blobbing up your infantry squads and all around good chap to have when things go south (as they usually do).

Yes there are probably better ways to use the points from the Lascannon but with the Preferred Enemy bubble the normally dismal BS of the PCS is mitigated slightly as well as guaranteeing a wound from anything they actually hit.  I was thinking it may be better to give these guys 4 Grenade Launchers instead.  This unit usually goes in ‘Belligerence’ along with the Company Command Squad.

Your typical move out and be annoying unit.  While 30 Guardsmen don’t last too long in a word of mass Scatter-Lasers they are fine for pushing up the center of the board and trying to grab objectives there.  Though they do have poor BS 3 Melta Guns is nothing to sneer at and one should never discount massed Lasgun fire.  With 3 Melta Bombs and the ability to re-roll failed to wound rolls a la the Ministorum Priest these guys can pack a punch in combat as well.  Fearless is a nice touch from the Priest but it’s important to watch out for leadership debuffing attacks.

This is a unit I would NEVER take if if wasn’t for ol’ Belligerence in which to hide them.  I dropped 3 Autocannon teams from my last list due to point restrictions but having 12 S7 AP4 shots hitting on 4’s and wounding most things on 2’s while re-rolling 1’s for both isn’t necessarily a bad thing to have.  In the days of the Battle Company having the ability to take out 2 transports a turn from these guys really tends to pay off in spades.

The last of the units to go into the Stormlord, the Veteran Squad fills a very crucial roll for my army in that they are attached to Coteaz, which gives me FANTASTIC anti-Deep Strike protection.  Any Drop Pod or Deep Striking Melta lists will think twice before landing withing 12″ of the Stormlord’s hull.  If they do they will be greeted with 6 Plasma Gun and 1 Lascannon shots which will be re-rolling 1’s.  EACH UNIT.  Not too bad.  Having an additional BS 4 Lascannon to take out more Battle Company transports ain’t to shabby either.

A new addition to the list.  A pretty dependable way to hurt Imperial Knights or other tough to wound Monstrous Creatures, the Vendetta also plays an important roll in transporting the Culexus Assassin if need be.  Hopefully the Officer of the Fleet mitigates my poor track record of having reserves come in when most needed.

These I take individually and will hug the sides of ‘Belligerence’ safely under the blue glow of the Void Shield Generator.  I don’t really need to talk these guys up too much since most people are respectfully wary of who these guys are and what they can do. 4 Twin-Linked small blasts at S4 AP6 with Ignores Cover and Shred.  The perfect way to deal with re-rolleable 3+ jink saving assholes.  It’s the perfect antidote to shenanigans.

She’s a thick bitch and belligerent as all hell, hence the nickname.  Not the best thing to take in a world of ranged D weapons and drop Grav spam but I love her all the same and the ability to hide ranged firepower in relative protection is where she really comes into her own.  Not that her own firepower is anything to balk at, having a Vulcan Mega Bolter which can spit out 30 S6 AP3 shots per turn (15 at 2 different targets if you wish) 3x twin-linked Heavy Bolters, 2 Lascannons, and 2 Heavy Stubbers.  The downside is her poor BS but this can be improved by having Coteaz chill behind the beast casting Prescience all game (if there are no deep striking threats). Yes, she can blow up and kill all the models inside her and yes, she takes up a LOT of my deployment zone and is extremely vulnerable to ranged D weapons and high strength close combat attacks but I love her and she really brings a lot of flavor to my army.

I’ve tried a lot of methods in keeping my backfield units safe from fire the first couple turns and nothing pays off more than the Void Shield Generator.  Some armies will drop the shields in their first salvo and that’s fine as long as I can recognize which armies can do that before deployment.  Generally I will have the Stormlord and the 2 Wyverns under it’s protective glow but as long as my opponent doesn’t have a reliable way of taking out the shields turn 1 I  will probably even have the infantry blob start with some models underneath for the protection.  The added benefit is that Grav weaponry cannot penetrate the shield which is a HUGE threat to ‘Belligerence’.

Ah Coteaz, when will you stop being the smooth player you be?  He’s almost an auto-include in every Imperial list I make due to his special ability that stops you from being seized upon, which is super crucial if you have a Super Heavy in your list since your opponent will be seizing on a 5+.  He also offers fairly dependable anti-Deep Strike protection which is one of the biggest threats to the Stormlord which is what the rest of my army is built around.

Pretty basic dude that brings Scout and Infiltrate defense to my list.  With White Scars Battle Companies scouting all over people’s faces this is another auto-include with me when writing Imperial lists.  I might put the wargear item that allows him to Scout with the unit he is attached to (blob) but I’m not sure.  The wargear piece would also give his unit other cool abilities.  The more I type this the more I like the idea of it.  I might do it.   I’m doing it.

This is another new addition for me.  I mostly added him to deal with invisible Deathstars and other psychic shenanigans likely to be seen on the tabletop.  I have yet to use the model but am excited to see what it can do this weekend.  He can either Infiltrate on a side of the board I want to keep the psychic Deathstar away from or I can have him ride in the Vendetta which extends his zone of influence.

So there you have it.  I’ll be attending a small 14-24 person tournament with Jeff InCoTrOl Robertson and the French Overlord so I should have some tough competition in which to try out the list.  What do you guys think?  Any glaring weaknesses other than the lack of mobility (which there is no Astra Militarum answer to)?  How can I make this list better?  Let me know if the comments.  I’ll be posting my tournament review next Thursday to let you know how it went.