Have you been enjoying Age of Sigmar?

Hey everyone, Reecius here from Frontline Gaming to talk a bit about Age of Sigmar and how it has been received by our crew and get some feedback from the community, too! Also, I’ve got something cool to share with you all, too!

Age of Sigmar has been a divisive game, to say the least. And, understandably so. It replaced one of the longest running tabletop miniatures games on the market. When you supplant a pedigreed game like Warhammer Fantasy, in which a large number of players have invested so much of themselves into, it is guaranteed to ruffle some feathers. Beyond that though, the game itself is a fairly dramatic divergence from what Fantasy was. In fact, I can honestly say I have never played a game like it before. It’s a bold move on GW’s part, and I wanted to discuss both my and my associates reaction to it as well as hear from some of you out there as well. 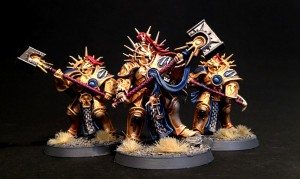 First and foremost, I must say that I love the minis. That is the first thing that draws you into a miniatures game and in this aspect, I think Age of Sigmar does a great job. They’re very OTT in their Aesthetic, almost Warmachine levels of exaggeration, and I dig that! It fits the epic scale of the game, where every warrior is nearly a demi-god or the 1 in 1,000 bad asses to survive some hellish landscape to rise up and thrive. It fits. I look forward to getting some minis painted up…eventually….when I discover that 25th hour in the day! haha. Who am I kidding, I will likely have the Frontline Gaming paint studio paint mine! So I guess, more accurately I will enjoy using them when our paint studio has gotten them looking awesome! 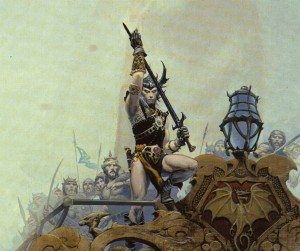 Speaking of which, the setting itself is good fun. I really dig the Michael Morcock style setting with mystic realms of crazy, high fantasy extremes, gods and goddesses active in the affairs of the mortal realms, and larger than life action. I enjoy that and while the Fantasy world had a deep and rich setting, it was pretty blase. Love it or hate it, the AoS setting is a bold move for GW and it feels more original to me at least. The lore of a game is what keeps me interested over the long haul, and I feel that this setting has a lot of potential.

Also, if you love reading fantasy fiction, seriously, read Morcock’s stuff. The books are short reads, but incredible. Plus, they heavily influenced GW’s fantasy IP. They’re some of the best fantasy reads out there, for me and will inspire some awesome games for you! 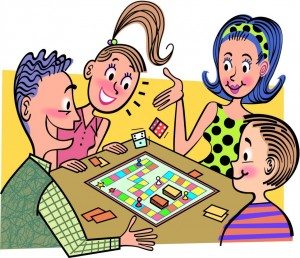 This is where I am left on uncertain footing. Off hand, I can say the game out of the box has been pretty disappointing as a standalone product. However, I feel like some of that comes from my preconceived notions as to what a miniatures game should be. As someone who appreciates a complex, sophisticated rule-set, AoS is just too simple to the point that it doesn’t feel like a complete product. To be fair, I have only played a handful of games so far, but, every game has boiled down to models moving to mid-field by turn two in a giant scrum that end with the Chaos army getting tabled.

By no means am I judging the game entirely off of these experiences, but it has certainly not left me super excited about the game. It provides some fun and funny moments which is awesome, but I can get fun and funny from Cards Against Humanity, Zombicide or a similar game at a fraction of the price and almost no effort put into building and painting models. Why would I invest the time and energy into building an expensive army for fun and funny? I wouldn’t, honestly. That’s just me though, some folks would be happy to do so and that is totally cool. However, I want to give it a shot playing with scenarios and objectives, as I feel that this will help a ton to give the game depth. For me, so long as I can find that sweet-spot where the game is mentally challenging with a great deal of tactical depth and excitement, I get hooked.

Also, I am left wondering what the target audience is for this game? Is it aimed at hooking younger players? Is it meant to be a strictly casual game? Does GW think that that is where the profit lays? Perhaps they do and I am certain they have access to information I do not so I can only speculate as to their motives.

What do you all think? Emotion aside as much as possible in regards to it replacing Fantasy, as a game unto itself, what do you think? Is this GW saying, hey, our customers modify our games anyway, why not just let them do what they want to do? Or is it a real, fully fledged game in the eyes of GW? If so, do you all think it is a smart move or not? Or, even an simpler answer, have we not seen the game fully develop yet at this early stage? If that is the case, do you think it was smart on GW’s part to release an unfinished game? Do they really intend for people to just put any models on the table they want and that that will provide a rich game experience that will keep folks coming back for more? If so, I just son’t see it. I assume they must be planning on player created restrictions. What do you all think?

I continue to play as I really want to love the game and at times, I have a lot of fun, at other times I just sort of scratch my head. We’re going to be trying out some of the cool, community driven comp systems out there, and alternate missions with objectives which I think will go miles to helping me individually to enjoy the game. What are you all doing with your AoS games to get the game you want?

Pre-order going up globally, Monday, September 21st in our web-cart and by emailing to: Orders@FrontlineGaming.org! Also, be sure to check your local game store to pick one up and if they don’t already carry the F.A.T. Mats, consider opting into the Outrider Program to get them into your local store and earn yourself a free F.A.T. Mat! 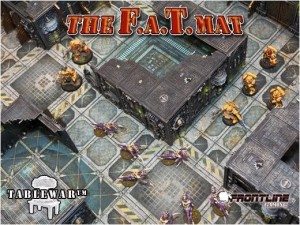 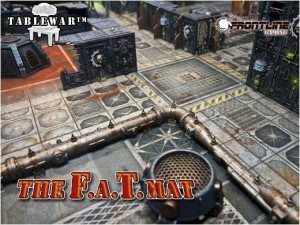 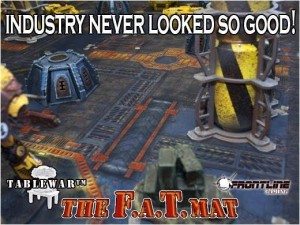 Posted on September 16, 2015 by Reecius in Age of Sigmar, Editorial

51 Responses to “Have you been enjoying Age of Sigmar?”