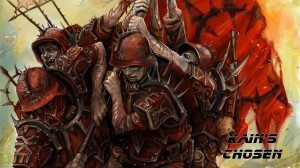 Hey there gamers! Its Kian Alden the (now former) intern here to talk to you about my renegades and heretics army, and my experiences with the army as a whole.

As I said in my first article, this army has gone through several major stages of evolution: The Purge Detachment with mass artillery spam was the first, next was the unending tide with supporting Daemonkin and The Purge artillery, and now finally a more balanced list with more emphasis on the Daemonkin. The list that I’ve been playing for the last week is in many ways the same as the list I brought to the Hammer of Wrath GT two weeks ago (which played well, and won me 3 out of 5 games): 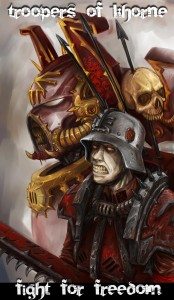 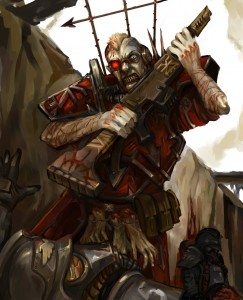 I have really enjoyed this list because it gives me two things that I desperately needed at the GT: Ranged heavy anti-tank (ap2 it better), and a Shock Assault unit. With this list, I feel extremely confident in my ability to handle most threats, because in the ten or so games I’ve played against people running strong lists I’ve consistently felt the need for just those four extra shots, and the ability to hammer an enemy in assault. One small change I made that will help tremendously is including a Sigil in each squad. This makes me stubborn in assault and allows me to re-roll my first failed morale test outside of assault. Although I lose one flamer template, I gain a considerable amount of control over my notoriously easy to scare off troopers.

At face value the most competitive form of this list would almost have to include blobs of zombies. They lose the ability to grind the enemy down over the course of the game, but they become an extremely durable and reliable objective grabbing unit. Zombies solve the biggest problem with the renegades army, morale control. I’ve found that my biggest fear is being tank shocked, and while Krak Grenades really help with this (mostly by allowing me to assault vehicles and monsters) having my units become fearless is a more reliable solution. 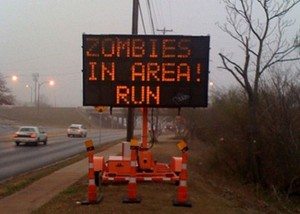 By switching the Tide out for a Purge and adding zombies I would save only 120 points just from the upgrades to the platoons, and also don’t need to take a second detachment to field the guns that support the Tide. The savings from the detachment amount to around 120 more points. All told 240 extra points, while very useful to be sure, when weighed against what the Tide actually brings to the table (outflanking units with crusader, flamers, light anti-tank, board control etc…) doesn’t seem like it buys me anything I need badly, but would let me take an extra heldrake and even more guns. 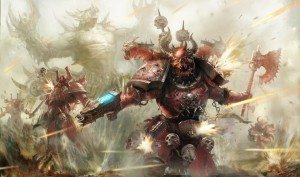 There is one more thing in the Daemonkin codex that I cannot get out of my head: The Blood Host. It feels like just what my army needs to tip over the edge and become too hot to handle. I would run the Blood Host thusly:

Possessed (they run up with some squads of troopers to provide counter assault, much like Cuddles once did)

The general game plan with this force is laid out by this fabulous infographic I made in paint! The general game plan is to use the Gorepack as an aggressive, and generally suicidal attack force. The bikers are one shot missiles to take out targets of opportunity, and hard units that the rapiers and other big guns cannot reach (Ob Sec Rhinos lurking under the cover of ruins, for example). The Unending Tide advances at full speed, forcing the enemy to target them or give up board control. 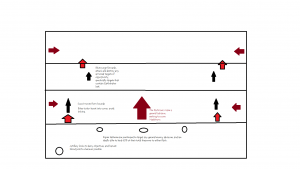 This rendition lacks the glamorous power of a Chaos Lord, but shifts the army into an even heavier MSU direction. I can take full advantage of the Blood Host and Slaughtercult’s special rules using more small, fast units. The small units of bikers, running with the hounds, (as they are now move through cover!) can race ahead and rip open transports so the artillery and hounds can lay waste to them. When the bikers die, they contribute cheap blood tithe especially if they’ve been able to score a kill first.

And now, for some progress photos! 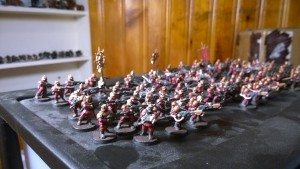 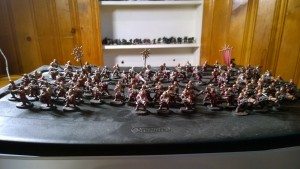 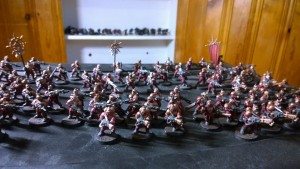 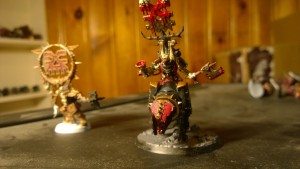 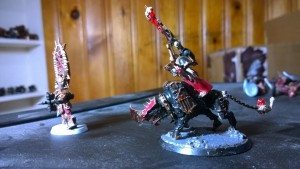 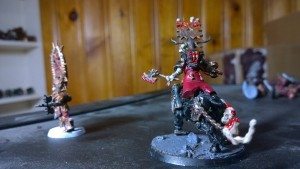 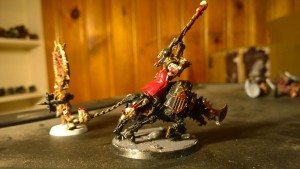 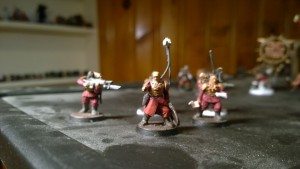 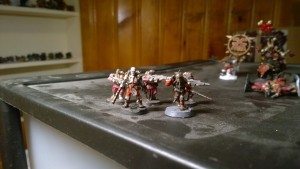 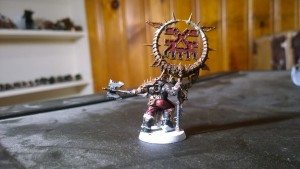 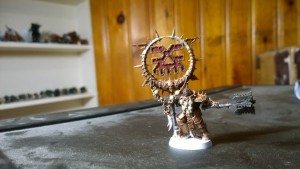 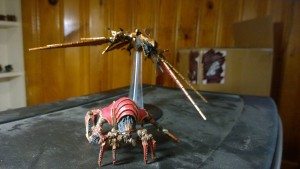 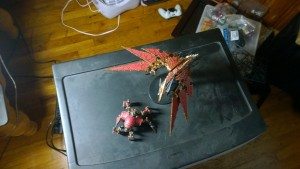 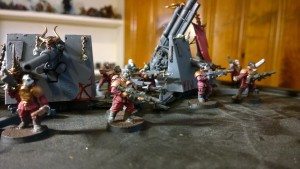 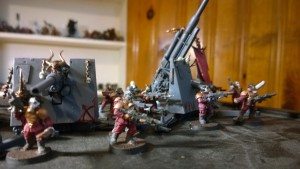 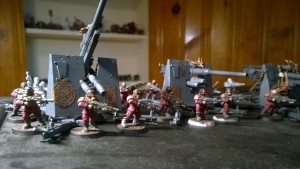 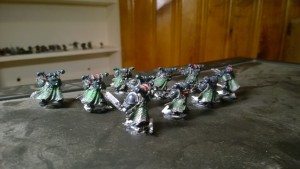 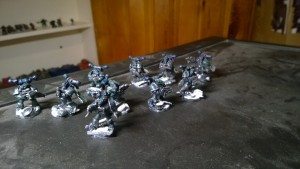 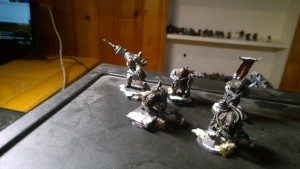 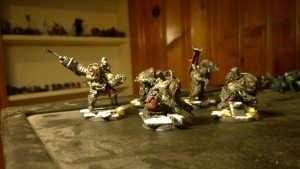 That’s all for this week folks! I’ll be posting once again in a week to keep you updated on the evolution of my army!

Projects on the Horizon: Kharybdis Assault Claw and 20 Khorne Berserkers! The Fist of Khorne Cometh! 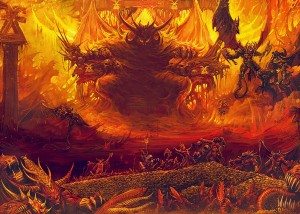 Zombies are fine, though I think I’d prefer to keep the ability to run. With that chaos sigils, your troops will probably be reliably enough.

If you want to take Bloodletters, have you thought about giving them an Instrument? You do not need a Comms Relais then, and you can Deepstrike your Hellturkey. For Khorne Deamonkin, it is a Demon of Khorne. So it won’t scatter and you can Detemine the ancle from which it will flame its victim the turn it arrives as well as the directions it can fly in its next turn.

I suspect the posessed will disappoint you. They have a Terminator pricetag and wear 3+ panties. I don’t like that combination.

Unfortunately the Heldrake cannot Deep Strike. Daemon does not automatically confer that rule any more. I know that possessed suck, but I’m just thinking they are worth it to break into the shenanigans the Blood Host can offer!

Ahh, too bad. Should have looked that up. Somehow I got the idea that Deep Strike is a general thing in the Khorne Codex.

Indeed. I thought Daemons still had Eternal Warrior stock for a moment this year 😛 3rd edition rules creeping up on me…

I like to add Combi-Meltas on my Gorepack Bikers as well. If they’re going to be one-hit wonders, I want that one hit to count.

Possessed suck, but I think the benefits they unlock from the SlaughterCult+Blood Host are worth it.

I’ll try to find points for the extra shots! I’m with you on the possessed too, plus if they ever do get to grips with something they can smack it around fairly well. If not, blood point!

I am the MoO!!!! If you are referring to the AM unit this is a chaos army list so it cannot be taken :/

They are found in The Siege of Vraks 2nd Edition.

Are those artillery pieces WWII German 88’s? Which Range are they from?

Also the army looks killer, renegades lists are so cool.

Thanks Warmaster_GIR! I’ve spent a long time bringing this army together and it is finally look really good.

They’re around $18 a pop on eBay plus shipping.