Thoughts on Age of Sigmar and How to Balance Games

Hello all!  Rawdogger here to talk about my first impressions playing Age of Sigmar and the simple house rules I think will go a long way towards quickly balancing your forces. 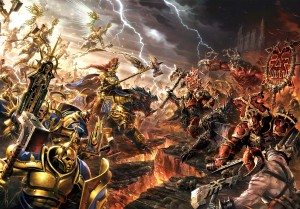 This past weekend I played my first game of Age of Sigmar with a mix of apprehension and excitement.  Apprehension from reading all the negative reviews and comments online and excitement from the fact that we finally had a cool skirmish level fantasy game with really cool looking models (the new releases at least).  As I said I had been going off of the mostly negative to lukewarm feedback I’ve been reading in the forums and blogs so I tried my best to at least approach the game with a positive and open-minded attitude. We decided to play a scenario from the first book and used wounds as a quick n’dirty balancing factor and got busy playing with our plastic army guys.  I must say that I actually had a pretty fun time playing the game. The turns went quickly and smoothly and there were a lot of laughs at some of the more off the wall rules mechanics with Daemon models.  There were, however, a couple moments that caused me to pause and think of ways that a mechanic could be toned down by house rules.  After a couple nights of thinking about the game and what worked and didn’t work I’ve come up with some basic house rules for Age of Sigmar that we will be using at the Martinez store to make things go a bit smoother on Age of Sigmar nights (currently Fridays from 4-8).  So here is what  I came up with.

Wound Balancing – Players are limited to the same amount of wounds per army.  It’s not a perfect system by any means but it’s the easiest and quickest way to quickly set up a game.

Limited Command Ability – Command abilities from your army’s general can only be used once per game.

Warscroll Limitations – Players are limited to 2 Hero, 2 Monsters, and 2 Wizard warscrolls in their army.  Models that have multiples of these traits count against all totals (i.e. Nagash is a Hero, Monster, and Wizard so he would take up 1 slot of each category).

Summoned Models Cannot Summon – This came up in our game and my opponent was quickly able to summon double the size of his starting army.  Nothing wrong with summoning but it has to be held in check.

I think by implementing these basic house rules everyone will have a much more enjoyable experience playing Age of Sigmar.  Yes, people can still game the system but to be honest they would only be able to pull it off once before they have a hard time finding another game.  I truly do believe that the game will eventually get it’s legs underneath it but it is up to us as a community to balance the game ourselves since Games Workshop is moving further and further away from writing balanced rulesets and focusing instead on making quality models.

So what are your thoughts on the game so far?  What kinds of house rules has your local gaming community implemented to try and bring some sort of balance to the game?