Orks at the Hammer of Wrath GT Part 2

You can read part 1 of the report, here!

I was out to prove to the world dat Orks was da best and da meanest! However in my next game I prove dat dey is da dumbest! Or perhaps, that’s just me… 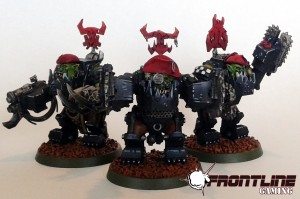 An interesting list! Drop Pods can be tough for ye old Orks, particularly in a Kill Point mission, but I have a tried and true anti-deepstriking play book for my Orks that works very well! All I had to do was execute that plan and this game should be an easy win for me. Oh, and let me add: I had never lost to Space Marines with my Orks, either! I was feeling pretty dang confident. 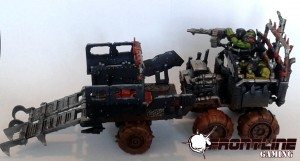 My opponent won the roll to go first and gave it to me as you do with Drop Pods. I deployed only my big unit of Warbikers with Characters on the table building a buffer zone around my back corner, where I put Mad Dok with my Mega Nobz in their Kustom Trukk! The bikes deploy in such a way to prevent most weapons from being able to hit the truck in rapid fire range or melta range, making it tougher to kill. The Warbikerz then move forward, and turbo boost back, giving them a 2+ cover save on a majority T6 unit that also has FnP, making it pretty damn resilient. What I do is let the Pods come down, take the punishment on the Fearless, tough Biker mob, and then counter attack with my units on the table and my reserves. It works like a charm! And this time was no different. My opponent dropped the Command Squad with all the characters, the Iron Clad, and the Grav Cents, as was expected. He hit me with some flamers, Grav weapons, meltas, etc. and killed a few Bikers, but nothing too serious. With my high cover save and good spacing, he didn’t have a lot to hit me with. He also juiced up his Commandstar with a ton of buffs, but most importantly was Iron Arm on Tiggy.

I then proceeded to choose my target priority. I got a few units of Tank Bustas on the table, and lined them up to take some good shots. I then got my Bikers in position to take out the Centurions and the Iron Clad (Iron Clads are a bear for Orks to deal with!) and Mad Dok plus the MANZ to take out the Command Squad+Characters. Well, this should be a slam dunk of a game! Easy, peasy…right? 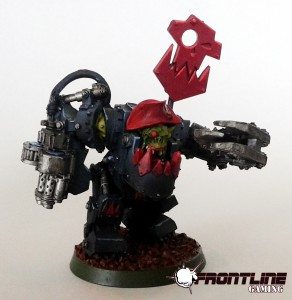 After I popped a few Drop Pods with Tank Bustas for some easy Kill Points, I then moved into my assaults, confidently placing my MANZ+ Mad Dok into the Command Star thinking how much fun it would be to swat those pesky psykers and Meph down with my heavy hitters. My opponent rolls a gang of dice for Tiggy’s attacks as he had been buffed up with psychic powers, and then rolls 6 wounds and says to me, “the whole unit’s dead.” I give him a funny look and reply that Tiggy is only AP4. And he reminds me he has Iron Arm, which grants Smash. I had 100% mixed up the 6th and 7th ed versions of the rule, thinking he had to drop to 1 attack to gain AP2, forgetting that Smash makes ALL of your attacks AP2. Since he was also strength 9 and had Force active, he insta-gibbed the entire unit! I got that sinking feeling in your stomach when you realize you just stepped in a big ‘ole pile of dog doo. That was BRUTAL!

So, I picked up my models, dried my tears, and proceeded to make the best of it, lol! I handed him my hardest hitting unit on a platter, and the funny things was, all I had to do was switch targets! The Bike squad could have gone into that unit, and soaked up the killer wounds on chumps, and swung Strength 10 and 9 Klaws into the unit, wiping it out, while the MANS wiped out the Cents and the Tank Bustas shot the Iron Clad. Or, quite simply drive away from them as they’d never catch me and be out of the game having earned no KP! lol

But, my mental error really cost me big. I handed him 2 KP and my two most powerful units on a plater. While the Bikers killed their targets, they took enough damage in the process to just be a sitting duck for the Commandstar which proceeded to mop them up on the next turn. OUCH! I just handed my opponent 6 KP…not easy to recover from.

The game became me trying to get back in it and my opponent keeping the pressure on. I was able to fight my way back in on Kill Points, and managed to pick up some bonus points, too. I was actually in a position to make a comeback as my Tank Bustas were popping Drop Pods, killing the Flyers (they’re actually really good at that!) and taking out MSU units for easy KPs. It all came down to the last turn where my opponent had a single Marine in the open, a Libby in 5+ cover and a Land Speeder Storm with 1 HP left. If I could kill two, I would pull off the come back!

So, I put two wounds on the Libby with Rokkits, nice! Two 5+ saves…gah!

I shoot the Land Speeder Storm with Rokkits, makes all his Jink saves. I then charge it with Tank Bustas…whiff!

Lastly, I shoot the Marine in the open with Rokkits, this will do it for sure! All misses. Doh!

And that was that. I lose quite soundly despite a come back. It all came down to that initial mental error. Brutal mistake on my part that cost me the game. My opponent was a solid general, an awesome guy and a good sport. Fun game despite the tough break in the early game. 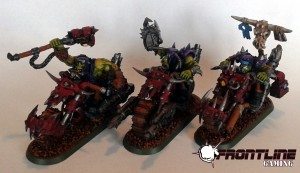 Mission: The Relic with Modified Maelstrom

What a crazy list! 45 Khorne Dogs, Bikers and Heldrakes: it was fast as heck! However, my army almost never loses The Relic due to Zhadsnark and his Scouting wonder boys. My opponent got first turn and took it, but played cagey, not bum rushing the Relic. I however, did exactly that, picking up the Relic. I then began to pull my giant unit of fearless, durable Warbikers deep back into my deployment zone and then wrapped them up with other units to protect them. At this point, I already had a huge advantage and just had to not lose Maelstrom to secure the game. My opponent underestimated the Tank Bustas in this game. 40 strength 8 shots a turn into a bunch of Khorne Dogs ends up being a bit of a mess. I started dropping them left and right and he realized he had to bum rush me, but I had already hurt him too much.

He did take a big bite out of my army though with the Drakes who set a lot of my Tankbustas on fire in their Trukks (ah, that rule is so brutal, D6 is overkill on Templates vs. Open Topped, D3 would have been much more reasonable), but I was able to shoot one Drake down with Tank Bustas and knock the Baleflamer off of the other, which sealed the game, really.

His Dogs, Lord, Bikers and Letters all came into me but my MANZ+Mad Dok and remaining units of Bikers were able to fight them off. I had just too much strength 8+ weapons for an army that relied on being multi-wounds and T4. That’s the risk with taking an extreme list, though.

In the end my Warbikers never dropped the Relic, and gave me a 10-1 Victory. His Lord managed to Kill Mad Dok in a challenge hilariously after he survived an insane number of Power Klaw attacks! He’s on his way to Deamonhood, for sure, lol. 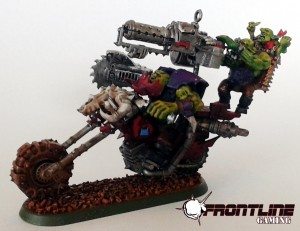 So, the Orks went 3-2 in a tough field. Not bad. My loss to Necrons was very close, a few dice rolls my way or one more turn and I take it. The loss to the Marines was largely due to a punishing mental error in the early game. The Ork list feels good to me. The one change I have made is to drop my 5 man Biker unit to 3, and slapped a Tank Hammer into each unit of Tank Bustas. I found that when the going got tough, the Tank Bustas had to charge into melee a lot, and they just lacked any punch at all. A Tank Hammer gives them a powerful weapon that works on infantry, which is what beats them up. They rock against MCs and Vehicles (due to all having Melta Bombs), but just regular old grunts give them a lot of trouble. With the Tank Hammer (which can’t be challenged out!), I can usually deal enough wounds to win combat or at least, not lose by much, and stick in the fight. I think it’s the right call. Otherwise, the list is good, I have beaten several Battle Companies with it at this point in time, too.

The event was a blast, I really enjoyed it. Game Empire Pasadena is a great game store, check it out if you’re in the area. And in the meantime, WAAAGH!!

Leave a Reply to Asmeralda