Twin Linked: The Best Rule in the Game

You are here: Home › 40K › Editorial › Twin Linked: The Best Rule in the Game 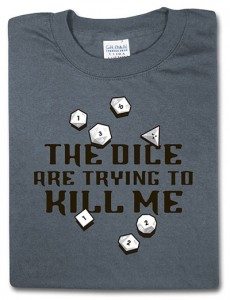 In the land of random probabilities, the man with dice mitigation is king.

Warhammer 40K is a game of many things, but one of its most notable factors is that it is a game of dice. We are reminded of this at virtually every possible opportunity during the game itself when we see extremely good or bad luck on rolls, but like with many things it is easy to miss the forest for the trees in this respect. Virtually everything we do during the game is controlled by the dice in some fashion- moving through terrain, casting psychic powers, shooting getting into assaults, determining when the game will end, etc- in fact, even before the game proper has begun, we are at the mercy of the dice for what psychic powers we have access to, what our warlord trait is, and the choices for deployment zones and objective placement. Dice are everything in this game, although contrary to what some people think it is not purely a game of luck- if it were, we wouldn’t consistently see the same names at the top of tournament rosters time after time after time.

So with the understanding that we are playing a game of luck, the most important question we should be asking ourselves is “how do I mitigate the effects of bad luck on my game play?” Because we all have luck affecting us, both good and bad, but if you’re intending to climb to the top tables you’re going to need to find a way to work around that- if you simply lose a tournament because you had a bit of bad luck one game, you’ll never win anything. This aspect of the game is, as I said, often overlooked, but it’s absolutely critical to the sorts of lists you should be bringing and how you should be looking at your unit choices.

See, it’s not just a matter of learning to play around bad luck and having redundancy in your list- these are important things, of course, but they aren’t everything. You need to design your army with bad luck in mind and find every way you can to minimize its effects on your plans. And first and foremost amongst these these is the title of this piece: rerolls, from the Twin-Linked rule or any other source.

You see, the beauty of having a universal reroll like Twin-Linked is that the worse your luck is, the better it gets. If you roll a dozen shots needing 3s and don’t get anything, you’re S.O.L. with things. However, if you have that same pile of dice needing 4s with a reroll, you are in a MUCH better position (even ignoring the minor advantage in raw results you’d get) because missing with every one of them on the initial roll still gives you a solid chance of pulling things out on the second roll- the more dice you fail with, the more dice you get to try again with. I can’t even begin to count the number of times a squad of Broadsides has missed seven or ten or twelve of its initial shots, only to pull things out on the reroll and come up with average or even above-average numbers of hits on the second iteration, and this sort of “second chance” is why rerolls are so wonderful.

And it’s more than just to-hit rolls; the value of rerolls shows through in special abilities like Tank Hunter or Preferred Enemy, in psychic powers like Prescience or Doom or Fortune, and in a multitude of other special abilities across a broad range of units such as Coteaz’s Spy Network or Tigurius’s psychic rerolls. Abilities like Fleet can make or break an assault unit because they are the difference between making critical charges and getting left stranded in the middle of the field to be shot to pieces by the enemy. Rerolls on the more esoteric rolls (such as Seize, ending the game, etc) are valuable enough to very nearly justify the inclusion of characters that have them on their own, as they can be absolutely devastating in the right circumstances.

A related category- and often even more powerful, though more limited- is the ability to simply not roll at all for things and simply decide the outcome. Not having to roll for Difficult/Dangerous Terrain is a very common example- and those who have played with it understand exactly how strong it is to just always be able to move as far as you want, no matter what. Bikes, Beasts, and many Cavalry units all fall into this category, as do Wraiths and Harlequins. Automatically succeeding reserve rolls (as many formations do these days, like the Ravenwing/Deathwing ones) is another common example, but there are others as well- fixed warlord traits and psychic powers are often in this category as well, such as Draigo (whose existence allows the Centstar to function), Lias Issodon (who can enable Infiltration-based strategies), or Sevrin Loth/Be’lakor (who guarantee Invisibility for those wishing to abuse it.)

Whatever your army or whatever your style, rerolls are an immensely beneficial feature to include and can go a long ways towards turning a list from “pretty good” to “a tournament-winner.” Though some armies have better access than others, all armies have at least limited options for dice mitigation techniques in some arena or another and a surprisingly-large number of them fall into the useable or even good category. Next time you’re writing a list to bring to a tournament, stop a moment and think about how you’ll handle poor luck and whether the inclusion of some kind of reroll will give your list the extra something that it needs to do what you want it to.

29 Responses to “Twin Linked: The Best Rule in the Game”